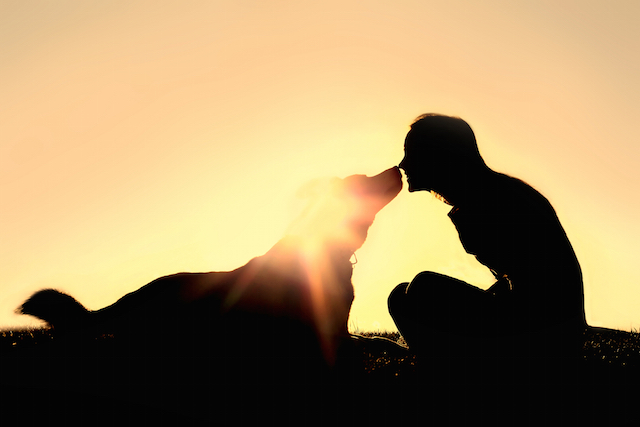 “To be rich in friends is to be poor in nothing.” ~Lilian Whiting

For eleven years of my life, I was graced by the presence of an extraordinary dog. Her name was Jenny, and she was a black lab and springer mix with a hyper personality and an almost absurd passion for the joy of being alive.

She was a gift to our family from a close family friend, and she was by far the most life-changing gift we ever received.

While there are many stories I could share about her, there is one story in particular that stands above the rest.

Mrs. Johnson (name changed for privacy) and her husband lived across the street from our house. They had dogs of their own for a number of years, but as they reached retirement age, they chose to no longer have pets. What happened next is the story of a truly beautiful friendship.

Jenny was an outdoor dog (mostly because of my family’s allergy issues), so she had an unobstructed view of Mrs. Johnson’s yard and house from her doghouse.

I don’t know exactly when it began, but Jenny started to visit Mrs. Johnson’s yard. At first we thought she was just chasing squirrels or some other favorite canine pastime, but eventually she started coming home smelling like perfume. Yes, she smelled like Mrs. Johnson.

I started watching Jenny’s visits across the street. They went something like this: Jenny slowly wandered over to Mrs. Johnson’s yard, sauntered up to the side door of their house, and then she waited.

Mrs. Johnson opened her door, petted Jenny, chatted to her as if she was talking to a human, and then gave her some sort of treat.

Jenny would then lie down in the Johnson’s shaded side yard and hang out for a while. As soon as one of my family members or I came outside, Jenny would come running home filled with joy and carrying that familiar perfume smell.

Jenny’s visits across the street became a routine part of our life. Mrs. Johnson adored Jenny, and the feelings were clearly mutual. Jenny began to protect the Johnson’s property as if it was an extension of our own.

When an unfamiliar car pulled into their driveway, Jenny barked furiously.

When someone visited the Johnsons and brought their dog with them, Jenny would pace back and forth across her dog pen with a mixture of barking and whining. Another dog at the Johnsons was devastating for Jenny; she would not and could not rest until the dog left with his/her owner.

When an unfamiliar person came near Mrs. Johnson, Jenny would growl at them. She protected Mrs. Johnson as if she was part of our family.

As she aged, Jenny developed a significant stress reaction to thunder and fireworks. It was especially challenging for her because she lived outdoors. I used to bring her inside to help her calm down.

One year on the Fourth of July, we went to the local fireworks display. We had to leave Jenny loose in the yard because she would stay calmer that way. When we got home, Jenny was nowhere to be found.

We called her name and went looking for her. Then we heard a familiar voice calling to us. It was Mrs. Johnson telling us that Jenny was in her house and was doing fine.

Jenny knew she could go to Mrs. Johnson when she was stressed or upset, and her friend would be there to make everything all right. We never left Jenny alone during fireworks again, but we were so grateful that Jenny’s friend took care of her that night.

Toward the end of her life, Jenny experienced a serious illness. We moved her inside to care for her. She was very weak and could barely walk.

Mrs. Johnson came over to visit Jenny and brought her a small treat. Jenny wagged her tail with a weak thump against the floor and gently took the piece of food from Mrs. Johnson’s hand. She was too sick to eat solid food, so she set the treat down next to her paw and continued wagging her tail while looking at Mrs. Johnson.

I couldn’t believe what I was seeing. Jenny was suddenly showing signs of new life. Mrs. Johnson’s visit seemed to have a healing effect that only friendship could impart. It was as if Jenny’s will to live had been reignited by her friend’s visit.

After Jenny passed away, we received a lovely sympathy note from Mrs. Johnson. I will always remember the beginning of that note because her words said it all. She wrote, “I miss my friend.”

Try as we might to define and describe friendship with words, friendship is really about stories. We learn what friendship is by experiencing it. We discover its power by watching it unfold in our lives. Written words never quite capture friendship’s true essence; we have to live it.

The beautiful bond between my childhood dog and my neighbor taught me that friendship has nothing to do with talking. Mrs. Johnson and Jenny never had a single conversation, but their bond was as strong as any human friendship. What truly matters in your friendships is presence, specifically your presence in your friend’s life.

If you want to be a great friend and you aren’t sure what that means, just be there. That’s it. Be present.

Visit your friend. Be there when he or she needs you. Listen to your friend. You would be surprised how many people feel like nobody ever listens to them. Just the simple act of listening can transform someone’s life.

Let your friends know that you are there for them by showing up when they experience tough times. Instead of trying to say the right thing, do it. Your actions are what matter.

Friendship is one of life’s most powerful gifts. Cherish your friends. Protect them. Be loyal to them. Treat them like Jenny would, and you’ll be one of the happiest humans alive.

Julie Thomas is a life coach and founder of a new self-improvement blog, www.thereadablelifecoach.com. She recently published an eBook entitled You Know Your Life Has Changed When..., available for purchase on Amazon. If you enjoy her writing, subscribe to her email newsletter here.

You’re Not Bad; You’re Crying Out for Help

3 Keys to Staying Present under Pressure