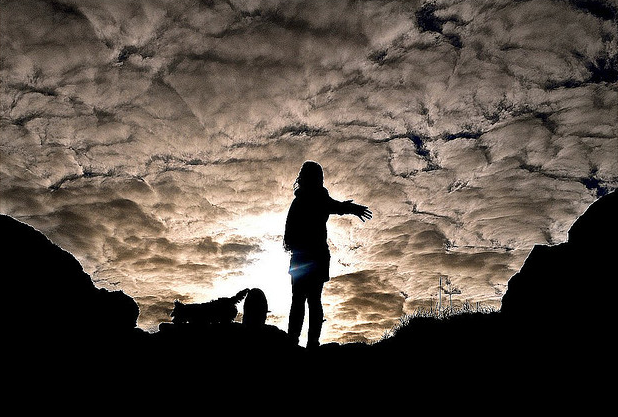 “I learned that courage was not the absence of fear, but the triumph over it.” ~Nelson Mandela

When I was a trainee teacher at a Cambridge University, I attended one of the oldest, most sought-after colleges, where most of the other graduate students were astrophysicists and economists, and 90 percent male.

They also seemed to come from families that were in some way related to the Queen of England, whereas I was a young, pregnant, trainee high school teacher whose nearest connection to Queens was owning a Freddie Mercury single, and I was a little shy.

Formal college dinners were a regular occurrence, and you were expected make small talk as you sipped your cream sherry in the medieval banquet hall in your black robes before dinner.

When I tried to talk honestly about what I was studying or what I was interested in, it tended to lead to embarrassed mumblings and a quick escape.

So one day, when someone asked me what I did, I said I was a lion tamer.

Their eyes lit up. “Really?” they asked, intrigued. “Oh yes!” I replied, “Each day I have to have nerves of steel as I enter a room of caged brutes and try to get them to perform tricks!”

I am no longer a teacher. But I am still a lion tamer.

In fact, it was the lions that stopped me teaching, the same lions who were hiding under the table at those grand banquets, when I couldn’t think of anything to say.

Yes, you heard me right, I live in close proximity to a caged lion. Wild, unpredictable, untamable, he longs to roam the plains. But instead, it’s just him and me, locked in my head together. His name? Anxiety!

I have learned what makes him roar, what feeds him. He smells blood and out he comes, lured by deadlines, taxes, financial issues, illness, death, or medical professionals. So far, so normal.

But he’s a strange type. He doesn’t like parties and social occasions, talking on the phone, images of me, swim suits, nudity, heights, or criticism.

And so anxiety and I live together. I know how to keep him sweet, and keep myself safe. We have learned to make deals. And I avoid his territory like the plague.

The only problem is, no one else can see him. Great, an invisible lion in my head! Sure, that doesn’t make me crazy, right?!

But just because you can’t see him, that doesn’t make him any less real for me.

I can feel his breath on my neck, him gnawing my stomach, my heart starting to race, my whole body shaking. That is real.

I feel stupid, irrational, embarrassed, and ashamed when anxiety starts to roam, unbidden from his lair. Where yesterday I could go out into town and chat with friends, today you will find me a quivering wreck, hiding from the world and making excuses.

Lately I have noticed that his territory is expanding, rapidly, and my freedoms diminishing.

It is time to take action, I decided. But what, and how? I don’t want to take medication. I worry about how to approach it with my doctor. I start to feel anxious about anxiety!

And then two realizations come, only moments apart. In weather terms, they were lightning and thunder.

At that moment, everything was illuminated in immense clarity.

The root of every single problem—every health issue, psychological  issue, career issue, and relationship issue that I experienced in my life, and had since childhood—it was anxiety.

He’s a much bigger beast that I had ever realized.

The simplicity of it hit me between the eyes. It was so obvious. Why had I never seen this before?

I had been so distracted by the stories in my head, the symptoms in my body, the apparently real circumstances of my life.

But now I saw that it wasn’t depression, or not being good enough, or lack of money or opportunities, or everybody hating me, or the political situation, or my lack of mothering ability, or the tax man that was the problem. It was all anxiety.

Why had no one ever seen this? Why had my doctor never diagnosed this massive anxiety disorder?

And then the thunder struck.

Every other human I come across in my daily life, to a greater or lesser degree, is paralyzed by anxiety too!

I had always thought that I was the odd one out. But no, anxiety is truly the human condition it seems. It’s just some of us are more conscious of it, and more open about it than others.

For most people it’s just part of the fabric of who they are. Unseen, it’s as big and wide as the sky. And you know why? Because the lion isn’t in most of our heads; we’re inside him. That’s how big and all-consuming our anxiety is.

This anxiety is what stops those I know from telling people they love them, confronting their partner, going on a plane, singing in public, going to the doctor, sitting in meditation, disciplining their child, picking up a telephone, moving to Australia, doing work they love, writing a book…

And it is exacerbated, whether by accident or design, by modernity and our culture, to epidemic proportions.

Our always-on lives, stress, pressure to achieve, economic melt down, the breakdown of relationships, childcare worries, lack of connection to the land and our families—these are like steroids to our anxious selves .

The modern world is functioning at status: anxiety. It is our normality. The lions’s jaws are firmly clamped around our heads, and we cannot even see it.

In order to escape, we need to understand this beast. What is anxiety, really? I wondered.

Cue the thunder clap! It is simply the fear of what if: what if I’m a failure, what if I’m rejected, what if I’m not good enough, what if we don’t have enough money, what if I get sick…

It is as though the defining feature of human kind—our awareness of self and the future—has turned against us, imprisoning us with what should be our greatest gift.

And the irony is that we are so scared of this “what if” that we live it as a reality right now. How crazy is that? We live the truth that we fear in the future, right now, incarnated, in our own bodies!

The side effects of palpitations, nausea, shaking hands, ostracization, are all real. Real responses to a fear we believe is real, now.

“What if” is our reality of madness, not “what is.” The lion is our master.

We only have two possible ringmasters in this circus of life: fear and presence. It truly is our choice as to which will rule.

When we take back our fear of “what if,” we remove ourselves from a projected future and claim our human power to co-create our reality. Here and now, in this present moment, we can step from the madness of “what if” to the power of “what is.”

The lion is not running this circus anymore. There’s a new ringmaster in town—and what a fine lion tamer she is becoming!

Lucy H. Pearce is author of several books, including Moon Time: a guide to celebrating your menstrual cycle and founder of The Happy Womb, for empowering women’s resources. She blogs on creativity, mindfulness & motherhood at Dreaming Aloud. Connect with Dreaming Aloud & The Happy Womb on Facebook & Twitter.