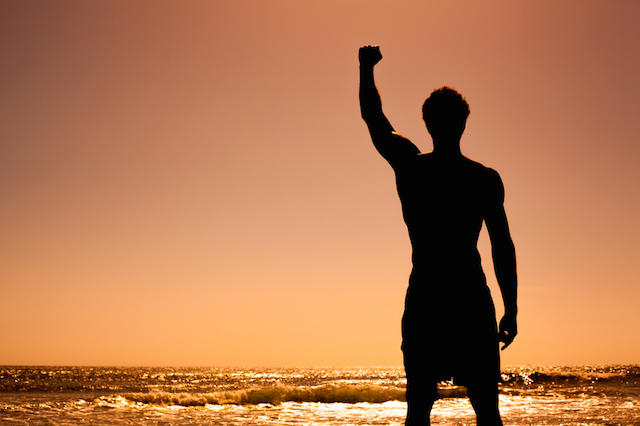 “I don’t like being too looked up at or too looked down on. I prefer meeting in the middle to being worshipped or spat out.” ~Joni Mitchell

Growing up, there were two sides of the kitchen table. On side A, there was my lieutenant colonel of the US Army, hardcore conservative, Wall Street trader of a father who used the word “faggot” while passing the salt.

On side B, there was little ole me, who was pretty sure that I was that word my father so vehemently used.

I thought Barbies were a fun toy (Malibu Barbie was my favorite, obviously) and at twelve years old, I got that funny feeling inside when I first laid eyes on Mark Wahlberg in his now infamous Calvin Klein ads. (Thanks for the memories, Markie Mark!)

So there I was on side B, always feeling as if my side was less than. How many of us have been there before?

I could never understand the larger than life, imposing, All-American man across from me, whose emotional unavailability and anger kept me at bay. But I tried, and tried, and tried.

It was as if there was always some sort of divide between the two of us, and no matter how desperately I wanted to close the gap, I couldn’t jump it. There was no safety net in our relationship, and so as I got older, it was one of the many reasons I went down a dangerous path.

Sure, the fear of my father that was ingrained in me was a catalyst for shame, feelings of unworthiness, and an inability to express who I was within the world.

It was also the black hole that I learned to fill with perseverance, self-respect, and authenticity, and for that I now see its purpose with gratitude.

When I hit rock bottom at twenty-five years old after years of drug, alcohol, and sex abuse, all roads led to the forgiveness of my father—and myself.

I thought back to his absence in my life. All of the athletic accomplishments that he overlooked, meanwhile celebrating my older brother’s football success. All of the dating conversations we never had, and all the times he could never say “I love you.”

I let those memories burn, and braced myself as the ashes dissipated in the air of my past. Though the immense pain, I cried as I waved goodbye.

I waved goodbye to the day when I came out of the closet at nineteen years old, and my dad replied that it was “his fault” since he has a gay cousin. I waved goodbye to his belief that there was something wrong with him for “passing along the gay gene.”

I parted with the memory that every time I brought good news, he could never celebrate it with me, as if it wasn’t good enough. I let go of the belief that I was never good enough.

With everything I waved arrivederci to, I waved hello and embraced all that I had become and am.

I welcomed the realization that it doesn’t matter if anyone else deems us worthy, so long as we accept ourselves.

I hallelujahed the knowledge that I was my father’s son, and his gift for his own self-growth; and if he simply was not willing to receive that gift at the time, this was not my fault.

It was not his fault either, as every person is doing the best they can at their own personal level of awareness. I could let go of all blame.

I could just be me, and let him be him, and live with the hope that one day, he and I could become an “Us.”

Within the larger story of Us, I see that our diversity is to be celebrated, and is the one thing that we all are able to appreciate in this often chaotic and messy world.

Our uniqueness is unique to us, and is a gift. I learned to be grateful for that. The great thing about gratitude is that it is a predecessor for forgiveness.

When I was freshly twenty-eight years old, I was going through a crippling yet transformative break-up, and on Father’s Day, I needed him.

I never spoke about men to my father, but I knew this was the moment. I packed my bags and blurry eyes in NYC and drove west to my parents’, where my dad was waiting for me.

There, in the den with the TV off, through the tension, I cried, opening up about how much I loved this particular man and how much I was hurting.

I admitted that I had started drinking again; that I felt deeply lost, that I needed help. That I needed my dad.

“You’re too nice of a person to let people do that to you” was his simple console. In its simplicity, it was enough. I was enough, and so was he.

The chasm got smaller; the separation united. I had jumped the gap and made it safely to the other side.

Nowadays, there’s a flow where the river was once damned. We talk more than ever; about how smart Peter Thiel is, or how the stock market is doing, and I also share personal stories with him. I share my authentic self.

Sometimes he just sits there and nods, and in his big blue eyes, I am given a world of quiet contentment. I no longer am looking to be anywhere but there when I am with him.

Our relationship makes me realize that if we could all have open and honest conversations with one another, we would be able to realize that we are all similar underneath our differences; that there is never a reason to create a divide between.

Of course, it takes two, and if the other person won’t meet us halfway, we can end up feeling divided in ourselves. If that happens, remember that you are wonderfully you for a higher reason.

You are uniquely you and meant to find those whom support you for all that you are. As you are, exactly who you are, there are others who were put here to simply support that person.

As an individual footprint in the paved path of the Universe, your mission is to be unapologetically who you are made to be. No one can step in your way if you are living a life of pure authenticity and self-respect, not even an unaccepting family member.

Remember that others’ negativity is a projection of their own pain—and have compassion for them.

How we feel about others is a direct mirror for how we feel about ourselves, and as someone who has experienced a lot of self-shame, I have seen the danger of taking my frustrations out on others and making it their fault.

Any sort of judgment stems from self-judgment, so the more another person irks us, the more we need to question what irks us about ourselves.

It’s important for us to remember that compassion can melt every boundary of anger and hurt.

Family contention can often be an opportunity to let go of self-blame and find forgiveness in spots that were once hidden to us, if we allow it to be.

It is often the stepping stone to massive healing if we are brave enough to take the jump. There is a reason why we go through everything.

Lastly, remember that you are allowed to hurt.

Some days, it’s important to let your heart bleed. Pain often connects us to our strength, so let it burn with faith that things are only getting better from here.

The greatest part of my story is that when my father and I are at the dinner table now, there are no sides any longer; there is just one beautifully imperfect, real human relationship.

There is acceptance, and there is love. I know this not only because he is able to tell me so these days, but because I feel it within myself.

My relationship with my father gives me hope. It gives me strength. It gives me the belief that one day, between Side A and Side B, we’ll all be able to meet somewhere in the middle.

Garrett Paknis is the creator of JustEnlightenment.com, a simple approach to the big topics in life.  A spiritual mentor + energy healer, and artist, he resides in downtown Manhattan, NYC, and thinks life should be one giant dance party. Schedule a session and get his free eBook here.