Overcoming the Fear of Taking a Risk: Just Do It
By Christina Kellagher 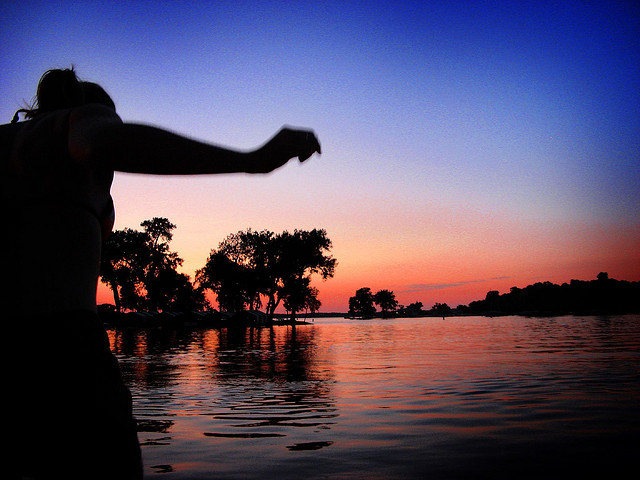 “Fear is inevitable, I have to accept that, but I cannot allow it to paralyze me.” ~Isabelle Allende

About eight months ago I hitched a ride to Buenos Aires, Argentina via a one way ticket with the love of my life. It wasn’t as easy as it sounds. I wasn’t throwing things in my suitcase and cashing out my bank account while kissing friends and family goodbye, sayin’ “See ya!”

My boyfriend and I were recent graduates at wits end suffering economic woes with no place to go. We had always wanted to go abroad to teach English, but weren’t sure where we’d end up.

At one o’clock in the morning after an argument over my apprehension, I just told him to book the tickets and I’d feel better.

Well, I thought I’d feel better. We finally booked our long anticipated flight. Champagne wasn’t popped and confetti didn’t cascade to the floor. I sat on the bed wondering why I felt so petrified to go. It had been a childhood dream of mine to travel abroad.

It was rather terrifying, and for the first time in my life I was afraid of an adventure.

Surprisingly, as I looked at our online itinerary my stomach sank. Nausea filled my days when I looked around knowing I was going to leave everything I knew.

I rationalized every excuse to get out of going but I reminded myself to persevere and that everything would work out. But the questions still popped up in my mind.

Was I making a mistake? Was this risk going to be worth every penny and hardship?

The night before our flight my stomach was curling into knots and my mind was a twisted mess. I tried telling myself to calm down and to just take the risk. I knew that if I could just get my butt into my window seat that everything would be fine. But even then my fear didn’t subside.

It wasn’t until the plane took off that I realized I had done it. I was twenty thousand miles in the air, and nine hours ahead of me was awaiting an entirely different world. But the fear was ever present. After a week of being a tourist, the fear remained hidden under a layer of excitement.

I couldn’t sleep, I was thousands of miles from home, only able to utter a few phrases in Spanish that I remembered from middle school.

I stayed in the apartment as much as possible because I was afraid to go out and communicate with others, let alone take a bus by myself and get lost some bad part of town.

With time, the fear slowly dissolved, the unfamiliar became familiar. We found jobs and an apartment within three weeks of arrival, a blessing considering we had no idea what we’d do when we got there. I had kept on despite my reluctance and faked a smile when I wanted to scream and run.

Everything worked out because I kept a positive affirmation despite the fear.

Many of my friends made excuses for themselves by letting me know how easy it was for me to just up and leave to a foreign country because of my circumstances, especially having a boyfriend who spoke fluent Spanish.

Yes, some of the opportunities I was afforded made the journey easier, but we worked our butts off, sold everything we owned, and packed up our few belongings into plastic bins.

My boyfriend, who is an optimist, was ecstatic and I looked calm because I wanted everyone else to believe that I was confident in my decision to up and leave.

From most people’s expressions and comments they didn’t believe we’d commit to actually boarding the plane, but I surprised everyone and even myself when I handed the boarding pass to the attendant and shook the pilots hand as I entered the plane.

The fear crippled my mind, but my legs managed to carry me to my seat.

Of Course There Will Be Doubt

Despite my crippling fear, sleepless nights, and fake demeanor, I knew deep down that I needed to take the risk; after all, that’s why it’s called a risk. Of course as with any life changing decision, you will doubt yourself.

You think Neil and Buzz weren’t freaking out before they got into an eight-ton firecracker that was going to take three days to get to the moon? They didn’t even know if they’d sink elbow deep in moon dust, but they took one small step for man, and an even greater leap for mankind.

I am sure that despite the years of preparation and endless simulations, they still had a sleepless night before one of humanity’s biggest risks.

Most people who take risks are kidding themselves if they don’t doubt themselves a teeny tiny bit. So do yourself a favor and take one small step toward your goal despite your apprehensions and gut-wrenching fear.

Fake It Until You Make It

Like I did, and so many other risk takers do, you have to fake it until you make it. It sounds cliché but it holds a boatload of truth. Use reverse psychology on yourself. You’re your own worst enemy. Tell yourself and others that you are confident about taking the risk and notice how your apprehension will dissolve.

Nurture the Positives, not the Fear

Print out some pictures of your risk and tape them on your ceiling so when you wake up with cold sweats, you can remind yourself that you are going to do what it is that you set out to do. I put pictures of Patagonia as my desktop screensaver to remind me of the beauty I would experience in Argentina.

Write a pros list and forget the cons. Focus on the major pros. Cons can always be worked through.

Whether it is lack of money, not knowing the language, being thousands of miles away from home, I knew that it was what I had always wanted to do and I could find money by selling all my things, or start learning basic phrases or use Skype to talk to friends and family. There is a positive to every negative.

No Excuses: Just Do It

Despite my crippling fear which gave me many sleepless nights, I stuck with it and kept telling myself “We already bought the tickets.” Like the Nike slogan, I needed to “Just Do It.” Perpetual excuses will pour from your mouth, but remember fear shouldn’t be a chain holding you back.

Don’t let fear paralyze you; close your eyes and imagine that everything will work out.

Don’t expect the unexpected and focus on what could go well. Just as life will have its highs and lows, taking a risk comes with excitement and terror. Fear is only natural when taking a risk. So go on! Jump out of that plane (with a parachute of course) into the world of your dreams.

Christina is a 23-year-old ESL instructor living and breathing Patagonian air with the love of her life in the beautiful city of Buenos Aires, Argentina. She is a novice writer who enjoys sipping hot chai tea, reading anything by Keraouc, and working on her positivity blog: everydaypositivevibrations.tumblr.com.

Taking Big Chances and Knowing If It’s Worth the Risk

Take Back Your Power and Start Loving Your Life

Overcoming Fear and Perceived Threats to Work Toward Your Dream