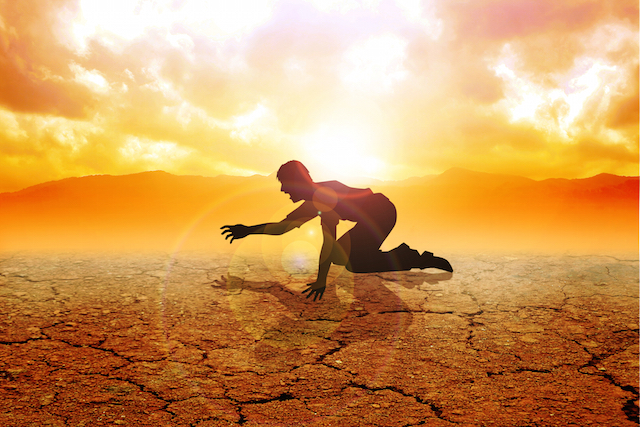 I guess I’ve always been a creative soul. Even as a young lad of four or five I had teachers taking my drawings of cartoon characters home to show their families.

Over the next twenty years I aspired to be a Ghostbuster, The Karate Kid, and then (when it turned out there wasn’t much call for eight-year-old ghost hunters and no suitable Mr Miyagi characters around) a writer, and finally a guitarist, all with varying degrees of success.

So it’s safe to say I’ve always had big dreams. For a long time, these dreams were enough to sustain me. I had purpose and that was great. Yet over time, after years of almost (but not quite) getting there, the added heartache of disappointment began to knock me down a little.

You see, the problem was that while I was dreaming big, I was also living under a habit of self-sabotage, of giving up too soon.

For a long time it was a similar tale: I’d have a vision set out for myself—making music, writing a book. And I’d immerse myself for months, even years, practicing, studying, trying to become the absolute best at it. Yet, when it came time to launch my creation to the wider world I lost all my courage.

I realize now this came down to a culmination of fear of failure, imposter syndrome, my ego being too connected to the results, and probably some plain old impatience.

You see, it was fun for me when I was in control, when I was at the creation-planning-strategizing stage, but once other people’s opinions were involved I became too afraid to push myself. I became very good at focusing on worst case scenarios, which then stopped me from really putting myself out there.

If this is sounding familiar to you, that’s because unfortunately, it’s familiar for a lot of us.

For many years I was in a vicious cycle of total self-belief leading to blinkered hope leading to crushing self-doubt. I was existing under stories and limiting beliefs that no longer served me, yet at the time I couldn’t see them and it took a long time before I was able to break free.

This phase of my life finally culminated for me when, after six years of struggle, of highs and lows and pyrrhic victories, the rock band I’d written and played guitar in came crashing to an end in a flurry of disagreements.

I was devastated. The one thing that I’d put my heart and soul into for so long and now it was over. All the hopes and expectations I’d had for my life were dashed in an instant.

Now, I appreciate that we’ve all suffered similar experiences and most, I imagine, have been worse than what I describe here. I’m aware that the demise of a rock ‘n’ roll band is not on the same plane as a long-term relationship ending or the death of a loved one (both of which I’ve experienced). But also, things can become microcosmic very easily, and for me, at this stage in my life, I had lost everything.

I’d been committed to making music at the detriment of relationships, vacations, and a proper career path. Now here I was, pretty much down and out with nothing to show for it but a few thousand copies of our last single in my parents’ roof space. (I think they’re still there.)

For the first time in years I felt lost. I’d thrown everything I had into the last six years, emotionally and physically, and I had no plan B.

I suddenly felt stuck and completely overwhelmed by doubt. I spent hours wondering where it had all gone wrong. Was it my fault? Had I done enough? Had I done too much? Why did it always happen this way?

As we all know, though, navel-gazing only gets us so far, and thankfully, after months of self-analysis, I had an epiphany.

I suddenly realized that I was the only one who could change how I reacted to this situation and move myself forward. At once I profoundly understood that if I just shifted my mindset a little I had so many more choices than I initially thought.

I finally understood that only I could get over these recurring patterns of behavior and move forward in life. I made the decision that day to change my outlook and I’ve never looked back.

As I explored these ideas I discovered three important steps that, when followed, can go a long way in getting you back on track. These are small shifts in mindset but with a powerful long-range scope for your success and happiness:

The thing was, I never had up until then. You see, I used to be an expert at blame. I blamed other people (a lot), myself (mainly), and the world (usually). I used to wonder why things weren’t happening for me the way I wanted them to. But then I never really did anything about it.

That day I suddenly understood that I alone was the only person who could make my life better. Me. Only me.

I held myself fully accountable for maybe the first time ever, and at that moment I became not just empowered but free. Because I was now in control of my life fully and completely. I realized that up until then I’d been making excuses for what had or hadn’t happened without taking responsibility.

I think we’re all in danger of this too. We find it easy to blame everything else for our problems without looking inward at what negative beliefs or habits are really to blame. In fact, most of us create excuses out of nothing. As a species we’re very good at it.

But imagine if we were to put the same amount of effort for excuse-making into service? Determination? Enthusiasm?

I’m sure we can all come up with a plethora of excuses to fall back on as to why we don’t do something, but that is not the path to happiness.

Don’t judge yourself, yet simply ask what you could have done to get different results. Hold yourself accountable and take action on what you’ve learned.

I also recognized that I’d fallen into a nasty habit of focusing on the obstacles in every situation rather than the opportunities. I’d been looking behind me at what had happened rather than looking in front of me at what could happen.

When I realized that, everything changed.

Because the thing is, what we focus on is what we move toward. It becomes our reality. So when I was only focusing on feeling unworthy and what I hadn’t done, I was creating a life of regret and unhappiness. By changing my focus, by looking forward again and focusing on the next step in life, I instantly saw sunlight bursting through the clouds.

For me this was not about focusing on something and expecting to magically conjure it into existence but simply focusing on the good. By focusing on what I could do next, rather than my self-imposed limitations, I was able to align with the amazing possibilities life had to offer.

So when you’re feeling knocked down, ask yourself, what is my focus right now? Am I focusing on something I want or something I don’t want? Am I seeing the opportunities or only the obstacles? What am I looking at?

The answers to these questions will help you get clarity, create awareness and elevate you to where you need to be.

3. Change how you speak to yourself.

The last thing I realized was that I had to change how I spoke to myself. When I stopped and listened to my inner voice I realized that I was the one who had been dragging me down. Yes, I’d had a few knock backs, but I could choose how I was dealing with the situation, and currently I was choosing to beat myself up over it. That had to stop.

Just like choosing where we place our focus, the language we use is also something we have full control over if we take a moment to connect with this power.

On that day I understood something that I know to be true first hand: We are nothing but the stories that we tell ourselves on a regular basis.

I realized I’d been living under a story that I’d told myself for too long—that my self-worth was connected with my results. And of course, no one wants this pressure, so I had been self-sabotaging this whole time to protect myself, to keep myself small and safe.

Becoming aware of this meant I could begin to step away from an ego-driven focus and begin to enjoy the journey more. I actively stepped away from the result and learned to simply enjoy life, in the moment.

We all live under similar stories that we’ve told ourselves for too long. In fact we’ve told them for such a long time they are completely real to us. I’m not worthy. I can’t be happy. I will never be a dancer.

What’s worse, too, is that most of us do know deep down that these are limiting beliefs, yet we still have trouble overcoming these specific barriers. These stories have become who we are and our subconscious protects who it thinks we are with all its might, no matter how destructive the story.

The minute I made the choice to let go of these beliefs I knew I was going to be okay. I’d turned an important corner toward a happier, more enriching life. This is something available for us all if we take this on-board; we can simply accept what is without resistance and then choose to let go of it. We all have that choice.

When we take responsibility for our lives, shift our focus, and change the way we talk to ourselves we take back control of our experiences.

I know that it’s still an ongoing process for me, but I also know that by using these three steps we can all deal with any situation we find ourselves in. That day I chose to take back control of my life and step into a more powerful, enjoyable role.

It might take a big personal issue to prompt this change, but if you’re feeling knocked down right now then it’s easier than you might think to get back up.

Most people believe they can’t control their emotions, but they can control where they place their focus, the language they use, and whether they choose to take responsibility for their happiness.

This is not about faking it, but understanding what resources you already have then taking small actions to shape the fulfilment and happiness in your life and relationships.

Change takes a second, getting to the point where you’re ready to change is what can take a little longer—but with the right steps it can happen a lot more quickly.

Matt Hattersley is a writer and trainer that helps people Live Life at 100% by removing the limiting beliefs, stress and anxiety that keeps them playing small and not getting what they want. Connect with him here and download the free 7 Minute Reboot Audio that leads to more clarity & confidence.

19 Things to Start Doing for Yourself in the New Year