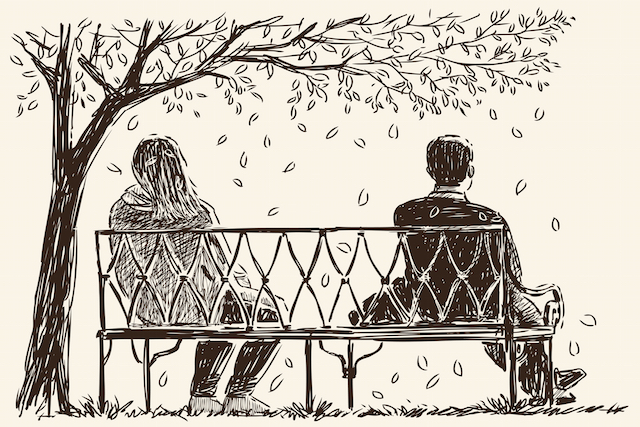 “The heart is like a garden: it can grow compassion or fear, resentment or love. What seeds will you plant there?” ~Jack Kornfield

I was all set to float effortlessly through life on a cloud of peace. I was trained mediator, had a Masters Degree in Peace Education, led workshops on constructively managing conflicts, and had a lifelong interest in creating interpersonal understanding. Yet, here I was, ready to wring his neck.

I’ve found it’s always easier to help others solve their conflicts than it is to deal with your own—there’s none of that pesky “emotional intensity” or “personal baggage” getting in the way.

People sought me out for help with their conflicts, but when I felt attacked or threatened, it was suddenly a whole other ball game.

When we first started dating, I found that there were things that my husband would do or say that left me feeling really upset, and my responses definitely weren’t constructive. Embarrassingly, my go-to was “the silent treatment.” Sigh.

Logically, I knew better. More importantly, I had spent years building the skills to do better. So, why wasn’t I using what I knew?

Simple answer: I didn’t want to. All the skills, knowledge, and tools in the world mean nothing if I lacked the intention to use them.

So, then the next obvious question is: Why didn’t I want to?

In conflict literature, there’s a term called a “retaliatory spiral.” As humans, we have a tendency to retaliate to hostile behavior with an even higher level of hostility, thus escalating the conflict.

Furthermore, even if neither person wants an escalation, each one feels entirely justified in their response, based on how they were treated. It’s the same principle as giving someone “a taste of their own medicine,” and it leads to conflicts that spiral out of control, becoming harder and harder to resolve.

Clearly this kind of behavior is destructive, yet we’ve all done it at some point and have probably felt pretty justified in doing so.

See, some kinds of conflict threaten our sense of self. The fact that another person seems to have the power to hurt us makes us feel weak, unstable, and unsafe.

In order to defend this sense of self and feel stronger, we may attempt demonstrate our own power to hurt them back. Mature? No. Helpful? Definitely not. Kind of understandable? Yes.

Personally, I hated how vulnerable I felt when my husband did something that hurt my feelings. I felt scared that he had the power to make me feel so upset.

Giving him the cold shoulder felt like a way to hide this “weakness” and assert my own power to hurt him. It also was a way to protect my ego, because by not talking things out I could avoid challenging my current belief system, thus maintaining the belief that I was right and he was wrong.

The problem was that by focusing on defending myself, I was basically putting all my energy into avoiding what I didn’t want—pain and suffering—instead of into creating what I actually did want. Deep down, I wanted way more than simply not getting hurt, but I wasn’t working toward it.

What I desired was a relationship of trust, honesty, and openness; one where we each had the courage to share what we were really feeling, and would listen to one another with an intent to understand rather than judge. One where we would have compassion for each other’s failings and work to strengthen one another (even when we were upset) rather than tear each other down.

This was the future I really wanted for us, and I knew that my current responses to our conflicts, while easy and comfortable, weren’t going to get us there.

So I started to shift my intention. Instead of having it be about protecting myself in the moment, my intention became to respond to conflicts in a way that would set a foundation for the kind of beautiful future relationship I envisioned.

It was only then that I was able to start putting all my conflict resolution knowledge and skills to use.

That isn’t to say that it was easy. Actually, it was hard, especially in the beginning.

It required me opening up when I felt most vulnerable. Moving toward, when I wanted to retreat. Taking responsibility for my part, when I wanted to dump the blame on him. Trying to listen with compassion when I felt frustrated or fed up. But, with a clear intention in mind, I did all these things and more.

Now, looking back, I’m so glad I did.

Today, one of the things my husband and I most prize about our relationship is the way we communicate with one another, especially during conflicts. We do all the things I had envisioned when I first set my intention, and I feel a huge sense of accomplishment in knowing that this was no accident, but something we consciously created.

Intentions can be conscious or unconscious, but everything you say or do will be based on an intention.

We all have a lower self that operates mainly from a place of fear, weakness, and limitations; and a higher self, one operating from a place of love, strength, and creativity. Before engaging in a conflict, I recommend setting a clear intention that is aligned with your values and the desires of your higher self.

Here’s some questions I ask myself in order to do this. I call it the “Where, Who, What, How” model.

Where is my focus? Is it short-term or long-term? Is it based in love or fear?

What do I want to create?

How do I want others to perceive or describe me?

What’s helped you work through conflict in your relationships?

Brooke Wichmann is the Associate Director of Conflict Resolution within the Student Resolution Center at Colorado State University. Brooke has seven years of experience working in the conflict resolution field. She is a certified conflict management coach and is licensed to administer the Conflict Dynamics Profile assessment. She attained an M.A. in Peace Education from the United Nations Mandated University for Peace.

Create Peace by Imagining a World Beyond It