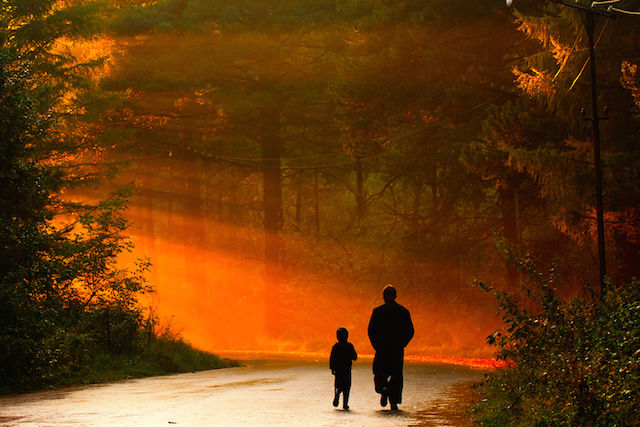 “If you cannot forgive and forget, pick one.” ~Robert Brault

I used to hate my parents.

I despised them. I blamed them for most of my issues.

I couldn’t do what I wanted to do in life because they would disapprove of it. I couldn’t be a cop or firefighter because those professions didn’t make enough money. I could only study a major that would be beneficial in getting me a job and not one that they thought was pointless, such as psychology or sociology.

I hated my dad for never being there when I was a child. I hated him for always getting angry with me and yelling at me and making me go to my room to cry by myself.

For a few years I felt this intense dislike of them and never told them. My anger kept building and building, and you know who had to live with it and deal with it? I did.

I smiled happily toward them and the outside world, but inside I was dying a slow death.

Dwelling in anger and hate is like drinking a poison that slowly destroys your insides and kills you. There’s a reason why the Jedis in Star Wars say that anger and hate lead you to the dark side.

The reason is because it will eventually cause you to lash out and cause damage to the people around you.

And that’s what happened to me. My façade of happiness crashed down upon me after a few rough weeks during my junior year of college. I had a meltdown and attempted suicide.

Most people will not act as extremely as I did, but that doesn’t mean their pain is any less than mine. I see others who carry lifelong anger and hatred toward their parents because of their childhoods.

It’s a burden they carry with them, and they cope with it different ways, whether it’s through addiction, working too much, or something else that slowly erodes their insides because they fail to address the anger and hatred there.

I struggled immensely after my suicide attempt. That first year, though, was when I started to realize something that would change my life for the better.

Anger and hatred mainly affect the person holding them because they are the one who destroys their life and relationship because of it. You don’t forgive for others’ sake; you forgive for your own.

When I realized this, I started on the long journey that is forgiveness.

I wish I could say it is like the movies, but it isn’t, at least not in my experience.

I have found that forgiveness takes a continual effort over weeks, sometimes months. It’s something you have to consciously do every time your anger arises.

Your anger and hatred fade away over time as you consciously reframe your thoughts and feelings to ones of forgiveness.

I started by first writing in my journal about what my parents didn’t give me when I was a child. I don’t mean things; I mean love, affection, and guidance.

I then started to give myself those things.

And then I learned how to see things from my parents’ angle and have compassion toward them.

I realized that their parents didn’t give them all that they needed. I saw that they were just trying their best and they were human like me, which meant that they had flaws and made mistakes.

I saw that they were every bit as lost as most of us are at times, because life has no guidebook.

I saw the little child within them.

I eventually had a semi-movie moment with my father after months of working on myself. I told him that I hated him for the longest time, that I know he was just trying his best, and that I forgave him for his mistakes. I told him I understood that I was an adult now and was responsible for my future and myself.

My relationship with him changed dramatically after that moment.

It isn’t super intimate but it’s better than it ever was. My father has said “I love you” to me without me saying it first. We smile at each other and have made each other laugh.

I have become close with my mother after forgiving her. I trust her and confide in her about the struggles I go through. I am so grateful to have her in my life.

I love them both very deeply and none of this would have happened if I didn’t learn to forgive.

Learn to forgive others if not for their sake, for yours.

I have learned that as I change for the better, so do all of the relationships in my life.

Michael Sosnowski is a freelance web designer, novice photographer, and lover of quotes and self-improvement. You can check out some of his photography work at Free Stock Paradise (link is http://www.freestockparadise.com) and use it for any of your stock photography needs for free.