Relationships That Hurt: When Enough Is Enough
By Lori Deschene 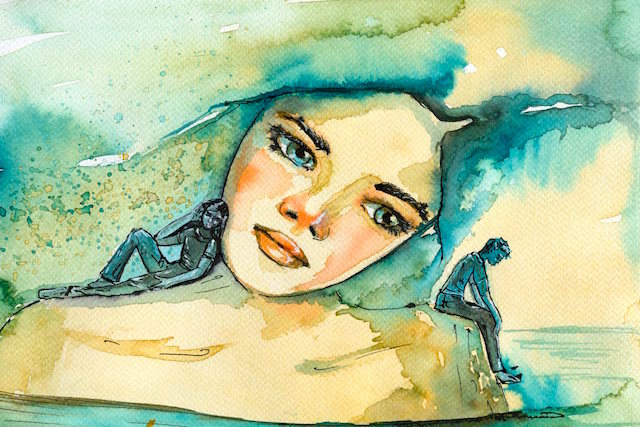 “Relationships are like glass. Sometimes it’s better to leave them broken than hurt yourself trying to put them back together.” ~Unknown

There was a time when I was quite black-and-white with relationships. I either trusted you implicitly, assuming you’d never intentionally hurt me, or believed you wanted to cause me pain and questioned everything you did.

Once you moved yourself into the latter category, there was no going back.

Eventually, I realized I was limiting my relationships by not recognizing the grey area, where people are human, they make mistakes, and they need forgiveness and understanding.

From there I swung the pendulum the other way—I trusted everyone. I refused to consider that someone’s actions might reflect that they didn’t truly care. And I stayed in a lot of unhealthy relationships while making excuses for people.

I wanted them to care. I wanted to believe they valued me—that it only meant I was interpreting incorrectly if their actions seemed to suggest otherwise.

But this is where it gets confusing. On the one hand, we often create a lot of meaning in our heads that isn’t really there. We may feel convinced someone intended to be rude, inconsiderate, or thoughtless when really that wasn’t the case.

On the other hand, sometimes actions speak louder than words, and our interpretations may be accurate.

Sometimes someone is knowingly hurtful or neglectful. We need to be able to recognize that or we’ll end up feeling disempowered, disrespected, and stuck.

After placing myself in this situation more times than I’d like to count, I developed a little three-question guide that’s helped me recognize when enough is enough.

1. Do their actions frequently contradict their words?

Anyone can contradict themselves once or twice. We’re only human, and sometimes we make mistakes. It’s consistent behavior that conveys how someone really feels.

I once dated someone who regularly made no effort. But I wanted to believe he was a good guy going through a hard time, and that we could both be happy if I was there for him.

When he opened his door to greet me on Valentine’s Day wearing pajamas—at 7:00 at night—and then threw my card and chocolate rose in his bedroom, it was obvious that I was deluding myself.

This is a somewhat extreme example, but there were little signs in the months leading up to this—unreturned calls, broken dates, many conversations where he wasn’t really listening.

His actions consistently reinforced that he wasn’t open to the type of relationship I wanted, at least not with me. That didn’t mean he intended to hurt me, or that he was a bad guy. It just meant that he wasn’t available or interested in being there for me in the way I knew I needed.

Or more bluntly put: for whatever reason, he did not care.

Words can be deceiving, because sometimes when we lie to others it’s because we’re also lying to ourselves. Trust actions. That’s where the truth is.

2. Do you frequently make excuses for them, to yourself or others?

If you often find yourself in a position where you need to defend the other person, odds are there’s a consistently unacceptable behavior you’re trying to justify.

An old friend of mine once dated someone who’d get mean and nasty, mostly to her, but also to her friends. She’d explain how he’d had a difficult childhood, and that she wouldn’t walk out on him like everyone else had.

Admirable though that might have sounded, she communicated through her actions that it was okay for him to treat her badly—because of all he’d been through.

You might convince yourself that this person is just misunderstood, and that no one else wants to give them the compassion and support you’re willing to offer.

3. Does this person turn things around on you, as if their actions are your fault?

It can be difficult to recognize those consistently unacceptable actions if you convince yourself you’re somehow responsible for them.

You might tell yourself that they regularly ignore your needs because you’re too needy. Or they belittle you because you’ve made mistakes in the past.

In other words, you might justify their mistreatment because they try to make you feel like you’re the “wrong one” or the “crazy one.”

When someone truly cares, they don’t use your mistakes or imperfections to justify neglect or emotional blackmail.

I formerly found myself in quite a few relationships like this, likely because I was recreating the dynamics of a core relationship from my childhood.

There came a point when I realized that people who truly respected me would encourage me to grow, but they wouldn’t let my weaknesses become an excuse to intimidate or disparage me.

No matter what you’ve done or how you sometimes struggle, you deserve to be in healthy relationships with people who treat you well.

In retrospect, I realize I lied to myself repeatedly because I felt unworthy. It was hard to believe that last part—that I hadn’t somehow brought painful situations on myself.

Considering all the baggage I carried around, I felt fortunate to be in relationships at all.

You may have far greater self-esteem than I did before, but you may still find yourself feeling confused and conflicted in relationships. It can be tough to see things for what they are when we’re emotionally involved and invested.

When in doubt, step back and ask yourself, “What would I tell a friend if s/he were in my shoes?”

Odds are, you’d know the truth, and the wisest thing to do. The question now becomes: Can you treat yourself kindly and walk away from what you know isn’t right?