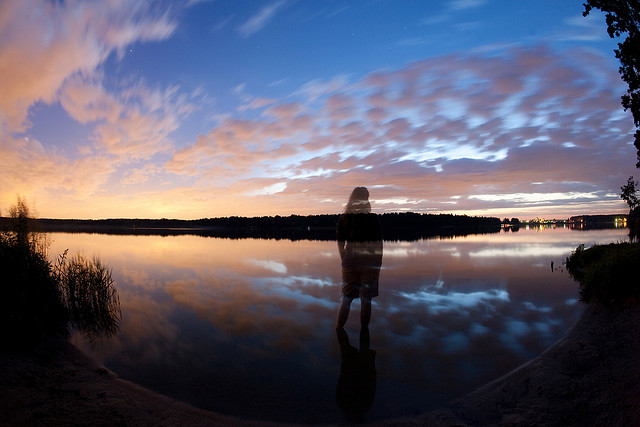 “Nothing ever goes away until it has taught us what we need to know.” ~Pema Chodron

We are currently in the midst of home improvement—what we thought would be a small “touch-up.”  Nothing seemed too threatening on the surface, just a scratch here, a nick there. It would be a simple fix.

But when we began the project and uncovered the areas we were going to address, we saw there was much more than met the eye, as often happens in life. We could no longer ignore what we had sealed over and painted, covered with lovely flowers, and ignored for many years.

Isn’t it funny how often plumbing is a perfect analogy for life? Opening what seemed to be a simple clog revealed 45-year-old crumbling pipes, made from materials long obsolete. All of the unseen clogging and rusting seemed symbolic of the hidden parts deep inside myself.

When I acknowledged a simple issue—my fear of change—it revealed old beliefs that no longer serve me. Beliefs that were behaving just like our pipes by creating major blocks. Beliefs that I had covered so well with personal landscaping that no one (including me) saw them.

The most amazing thing was sharing this with a plumber who really got it and shared my insights.

Who knew—enlightenment through our sewer drains!

So as the project moves on, I want to share five of the truths about home and self improvement that I have discovered thus far:

1. No matter how lovely the surface, what lies beneath will eventually appear.

It does not disappear. In fact, it usually festers and becomes even larger while no one is looking.

Just as our 1967 plumbing no longer served us, and in fact, was hindering our lives, I have discovered emotions and beliefs from about that same time that are certainly even more obsolete than my pipelines.

The issues I had covered for 44 years were still there—my own personal time capsule of high school and young adulthood, filled with fear and insecurity, lying in wait for me to acknowledge its presence.

This time capsule did not magically disappear with age; it just was very dusty from being hidden. When I opened it, I saw the crumbled debris that was quietly affecting my life every day. The fear of being seen, the belief in lack and scarcity, the longing to be loved were all there, as real as in 1967, still clogging my life today.

2. Sometimes there is a need to go much deeper than expected.

The first estimate of the pipe depth was 30 inches—not easy, but not a big project. Then as the excavation began, the backhoe began to go deeper. And then deeper. Everyone stood around shaking heads, wondering how these pipes could be so hidden.

We knew they were there, but no one expected them to be buried so deeply! Finally at seven feet, with only the top of a worker’s head barely visible, the pipe was exposed.

Uncovering some of my old beliefs has taken this much effort. Years of life have piled up and have hidden what I didn’t want to explore. I needed the encouragement to keep digging; to know that eventually I would reach what I thought was unreachable.

3. You may have to break something up to make way for something new.

The new connections could not be made while the driveway was in place. Just like in life, some relationships must be broken as the path is opened for new energy, new beliefs.

I had some relationships that had long served their purpose, just as our 26-year-old driveway had provided entry to our garage for so many years. But it was time to move on. And as I’ve created change, I’ve done just that.

I have been sad to see some relationships end, but they were holding my old patterns in place.  New energy could not flow into my life while I held onto what no longer fit. I didn’t need to make any judgments; it was just a part of the process.

But others did. And they made it so much easier with their help. I didn’t have to handle this overwhelming project on my own. I could ask for expert assistance. Because of this assistance, the job went much faster, and I felt confident in the experienced hands that were helping us.

In my personal life, I have been so fortunate to have those with experience, knowledge, and insight to help me. Yes, perhaps I could have read enough books, journaled enough, meditated enough to unearth the old patterns.

But by accessing the talents and gifts of some of my teachers and some of my friends, the process became much easier. They gave me tools and practices that helped me release what I’d held onto for so long. They supported me with loving energy. I didn’t have to do this alone.

We never have to do it alone.

5. The process is so worth it.

Of course, I now think of how much I wish we had done this many years ago. I look out and see a new driveway, a new lawn, and I know that, deep below, there are state of the art pipes, nice and flexible so the earth can move, clear and sturdy.

An even better feeling is the huge relief that I feel after clearing the beliefs there were hidden so deeply below my surface.

Now there is much more room for fresh new energy. I’ve cleared the pipes so truth can flow through them. It’s such a different feeling. When I was clogged with old belief systems, I had no idea how they were stifling me.

Only now do I see the amazing difference and recognize that yes, this has been a difficult process, but so very worth it!

So I honor the gifts of home improvement and the opportunities they have provided me. I have been able to dig deeply and then to emerge with more freedom, more love, more flow.

I know there may be more surprises and more unexpected work. But now, I am enjoying the gifts of this moment.

Karen Mead is an alchemist, an explorer and a fellow traveler on this journey of life. Visit her blog, The Peaceful Journey , or check out her website, A Peaceful Path .

How to Get All the Benefits of Meditation by Balancing