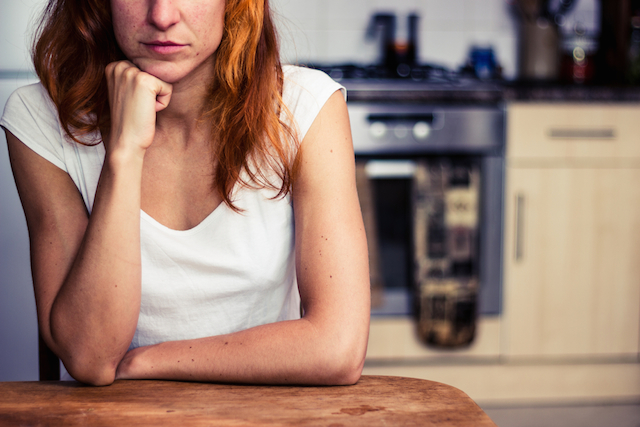 For most of my life, I’ve seen the world in black and white, and I’ve felt constricted and pained as a result.

When I was a young girl, I believed there were good people and bad people, and I believed I was bad.

When I was an adolescent, I believed there was good food and bad food, and because everything tasty fell into the latter category, I channeled the shame from feeling bad into bulimia.

And when I grew into adulthood, I believed there were good decisions and bad decisions, which may sound like a healthy belief system, but this created extreme anxiety about the potential to make the “wrong” choice.

When you see life as a giant chess game, with the possibility of winning or losing, it’s easy to get caught up in your head, analyzing, strategizing, and putting all your energy into coming out victorious.

Back then, I thought for sure that if I made a misstep, I’d end up unhappy and unfulfilled, not to mention unworthy and unlovable—because there was a right path and a wrong path, and it was disgraceful to not know the difference.

One pointed toward success and bliss (which I desperately wanted to follow), and one led to certain doom.

With this in mind, I thought long and hard before moving to Spokane, Washington, at twenty-two. To live with a stranger I’d met on the Internet. And had only known for two months and met in person once.

Okay, so I didn’t really think long and hard. But I felt in my gut, when we first connected, that this was the right choice for me.

In fact, I felt certain, something I rarely felt about anything (except my innate bad-ness).

He told me we were soul mates, which was exactly what I wanted to hear, especially after spending six months bouncing from hospital to hospital, trying find the worth and substance locked somewhere within my cage of bones.

It made sense to me that, if I had a soul mate, he wouldn’t live right next door.

Disney may tell us it’s a small world, but it’s not; and I thought for sure there was something big awaiting me 3,000 miles from my hometown near Boston.

People told me I was making a mistake when I shared the details of my plan.

Some said I was too fragile to move out of my parents’ house, even if I’d planned to move close to home.

Some said I was a fool to think this man was my soul mate, or that I had one at all.

Some said I’d one day regret this choice and that they’d have to say “I told you so.”

But I felt absolutely confident in my decision—until he came to Massachusetts, two weeks before I was scheduled to move, to meet me for the first time.

I knew right then it was wrong, somewhere in my gut. I didn’t feel even the slightest spark, but my “soul mate” and I had already planned a new life together. Before we’d even met.

And I didn’t want to admit I’d made the wrong choice—not to him, who I was sure would be devastated, and not to the others, who I feared would be smug and self-righteous.

So I moved across the country anyway, thinking that maybe I’d feel differently after getting to know him better.

If you’ve ever seen a movie, you know exactly how things didn’t pan out. Since life isn’t a romantic comedy, I didn’t eventually realize he was my soul mate and fall madly in love.

Instead, our individual demons battled with each other, we fought for the better part of six months, and we eventually broke each other’s spirits, broke down, and then broke up.

You could say, after reading this, that I had made the wrong choice—especially knowing that I knew, the day I met him, that he wasn’t the man for me.

You could say I’d chosen a bad path, running away from home in a misguided attempt to outrun who I had been.

These are things I assumed I’d think if I ever decided it was time to leave.

And yet I didn’t think these things at all. In fact, this was the very first time I broadened my vision to see not just shades of grey, but a whole rainbow of vibrant colors.

Yes, I’d made an impulsive choice, largely driven by fear and fantasy. Yes, I’d acted against my instincts. And yet I knew, beyond a shadow of a doubt, that it had not been the “wrong” choice.

Because right then, I realized that, despite things not working out as I planned, I’d learned and grown through the experience, and it had served a purpose, even if not the one I originally envisioned.

Our demons colliding was a blessing, not a curse, because it forced us both to more closely examine how our issues affected our relationships—mine being toxic shame and destructive tendencies, and his being his business, and not for public consumption.

Moving so far away was valuable, not shameful, because it taught me the difference between running away from what I didn’t want and running toward what I did—a lesson I struggled to apply for many more years, but, nonetheless, now understood.

And acting against my instinct was a good thing, not a bad thing, because it taught me to listen to my intuition in the future, even if I might disappoint someone else—a lesson I may never have fully embraced without having had this experience.

That’s the thing about “wrong” choices; they usually teach us things we need to know to make the right choices for ourselves going forward, things we can only learn in this way.

There isn’t one single way that we should live our lives, or else we’ll be unhappy. There isn’t one path that will lead us to success, bliss, and fulfillment.

There isn’t a straight ladder we’re meant to climb, hitting milestone after milestone until we emerge at the top, victorious, with the view to show for it.

There’s just a long, winding road of possibilities, each with lessons contained within it—lessons that can help us heal the broken parts of ourselves and find beautiful pieces we never knew existed. Pieces we couldn’t know existed until we made choices and saw how we felt.

If there’s one thing I’ve learned since that very first move, over a decade ago, it’s that life never offers any guarantees. And it can also be incredibly ironic.

Sometimes the people who seem to make all the right choices are the least happy with the people they’re being and the lives they’re leading.

We could spend our whole lives looking for external validation that we’re following a path that’s “good”—living in a narrow, black-and-white world, feeling terrified of making mistakes.

Or, we could commit to finding something good in every step along the way, knowing that the only real mistake is the choice not to grow.

On this Technicolor journey of unknown destination, I am not good nor bad, not right nor wrong, but most importantly, not restricted. In this world of infinite possibility, at all turns, I am free.