Healing from Depression: It Begins With Asking for Help
By Doug Walsh 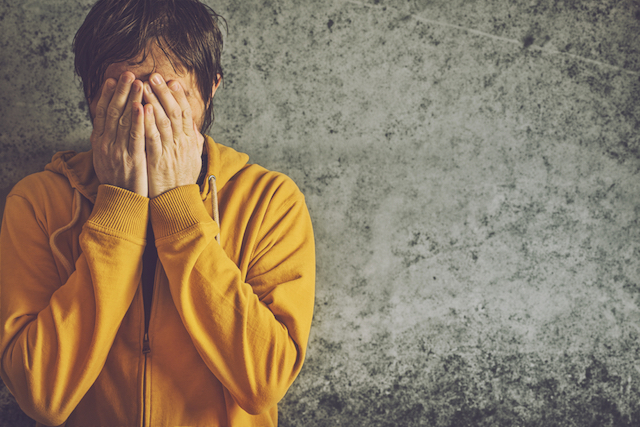 “I speak of a clinical depression that is the background of your entire life, a background of anguish and anxiety, a sense that nothing goes well, that pleasure is unavailable and all your strategies collapse.” ~Leonard Cohen

Right before my eighteenth birthday, when I was about to go to university, I was hit by a car and sustained multiple fractures to my right leg. This led to a couple of operations and the best part of ten months with me unable to walk.

While all of my school friends and peers were having the time of their lives in school, I was silently suffering with depression and anxiety, both of which continued to increase.

Whether it was the weed I smoked, the bottles of whiskey I drank, or the junk food I ate, I could not find comfort or relief from anywhere. Things just got worse, and I felt absorbed and consumed by the victim mentality that I had let penetrate my identity.

I dropped out of university after re-doing my first year. Despite passing, I just couldn’t go back. I was so ashamed to be me. I didn’t even tell my future housemates that I wouldn’t be returning.

About this time I realized there was a problem. In retrospect, it should have been glaringly obvious to me, with the self-medicating that was going on, but of course it’s harder to spot problems in ourselves.

In two years I had gone from one of the most outgoing people I knew, someone who always liked to do things like play sports or party, to a recluse who needed some sort of alternate state of consciousness to function. I started working and going out again on the weekends with some of my old friends and people I had met through work.

Naively I thought the problems were dissipating and I was returning to who I used to be. Now I look back on it and I know that the younger me had no idea who I was. Things leveled out for a few years until one day I had a breakdown on the way to work.

There was now no denying the extent of the problem, but hell, if you are in denial you can dig your heels in pretty firmly, and that’s what I did.

After a few more years of self-medicating, something happened, and to this day I can’t put my finger on the trigger, but something changed that made me realize enough was enough. A good friend recommended a therapist to me, and I was keen to see him and work through the issues that had been building up for seven years.

So I met with Peter and it seemed like an expensive chat with a nice guy for the first five or six sessions. Around this time I also had had a regular meditation practice. One day whilst meditating I felt like I gave myself permission to open up at the next session with Peter, but I have no idea from where or by whom this permission had been granted.

I was finally able to approach the issues with candor and rank honesty. I was able to bare my soul and describe how I had felt.

It’s weird to think that at the age of twenty-five this was perhaps one of the first times I’d done this, but I’d been so suffocated by depression and anxiety, and numbed by my self-medicating, that I had not once looked under the surface to see what things were really like inside.

Therapy began to get in to the nitty gritty of what was causing me to feel how I felt.

I had a fortunate and mostly happy childhood. My parents always did their best for my brothers and me. I could never doubt that. Interestingly, though, there were some wounds from my formative years that may well have contributed to me making some less than ideal choices in my teenage years.

Add to this the massive fear of missing out and jealously of my peers when I began university, and it’s a perfect recipe for some kind of psychological disorder, which in my case manifested as depression and anxiety.

I want to take a moment to describe the feeling of depression and anxiety as I experienced it, because I think too often in many parts of our society they are not described in their full ugliness.

Imagine waking up and feeling sick. Sometimes you throw up, sometimes you don’t. You then have to think about going to work. These thoughts mainly contain a deep sense of dread—not dread of anything in particular, but dread at the overall sense of having to interact with the world.

It’s so hard to describe because I wasn’t scared of interacting with people and I had friends, I just didn’t want anybody to know me.

After the dread comes self-loathing. I wasn’t worth knowing. I wasn’t worthy of any attention or any of the good things in life. How could anybody want to be around me? I didn’t feel deserving of anything really, and I projected this on to my work life, where I never tried anywhere near as hard as I could.

If it were the weekend, I’d do the only thing I knew that would help me: smoke weed or get drunk. It seems ridiculous now, and it probably is, that despite me being anxious and paranoid about going out, I would smoke weed, which only served to exacerbate this reluctance to leave the house. But it was my crutch; it held me up. (It didn’t, it made things worse.)

I’m aware of the futility of describing feelings in explicit terms. Nobody else but me will know exactly how I felt.

It’s like having a weighted vest on your chest that makes doing anything difficult. It’s like having the most negative person you could think of on your shoulder constantly nagging you, deeply instilling a sense of not being good enough and destroying any modicum of self-worth and self-respect that remained.

Despite this being my personal experience, I now know that I was not alone. Nearly a fifth of people in the UK, where I live, suffer with depression or anxiety at some stage in their lives. This I am okay with, it’s natural. Life has its downs, bad stuff happens, and it is our psyche’s way of dealing with it.

What I am not okay with is that it’s estimated that 50-80 percent of people suffering with depression do not receive treatment.

The stigma surrounding mental health issues in functional human beings is astounding. Because of our society’s attitude toward mental health, many people suffer in silence, and suffer much longer than they might need to.

I want people to know that you can talk to people. You can get help. There are support structures in place through healthcare providers that can give you a light at the end of the tunnel.

I was one of the lucky ones who, through a stroke of luck, found a way to ask for the help I needed. I’m still not sure how that happened, but I know I am forever grateful for it.

Through therapy, learning to accept myself, and my meditation practice, I am fortunate enough to say I don’t think I will head down that road again. And I know that the people around me will help me. If not, then I can pay to see qualified professionals who will be able to give me the help I need.

I know we have weeks and campaigns to raise awareness of these issues, but this is something we should always be aware of.

If you are the one who is suffering, know that there are people out there who can help. If you’re suffering in silence and carrying on, then you have already shown you are brave enough to ask for help.

If you know somebody who is suffering, remind them that you are there for them, and that there are people who can help.

With the rate of diagnoses of these types of illnesses increasing over the last half a century or so, it’s more important than ever that we are able to help each other in anyway we can, especially with something as quintessentially human as our feelings.

There are a few links below to free online resources that can provide support in dealing with your feelings. Of course, you can also discuss how you feel with a trusted friend or family member, or a professional. However you do it, know that taking the first step and asking for help is how it starts to get better.

Anxiety Forum – Recommendations and a forum to discuss anxiety

The American Psychological Association – Site includes research on anxiety, getting help, psychology news, and helpful books pertaining to the illness.

Depression Forums – Offers a caring, safe environment for members to talk to their peers about depression, anxiety, mood disorders, medications, therapy, and recovery.

Doug Walsh is a Brit with a passion for meditation. He has recently started www.onestillmind.com, which aims to bring meditators from across the world together to share the wisdom and peace meditation can bring. Check his website for articles, tips, and discussion on meditation.