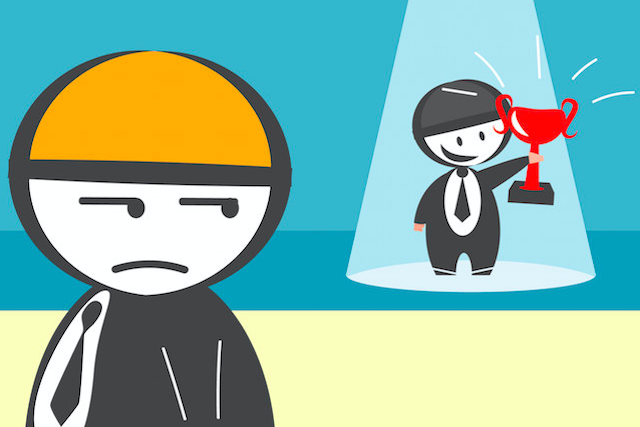 “Stop beating yourself up. You are a work in progress; which means you get there a little at a time, not all at once.” ~Unknown

I got embarrassed at the gym.

I sat down at the bench press, ready to hoist up 135 pounds of iron. My goal was eight reps for the first set.

Before I started my first set, I heard someone huffing to my left. I looked over and saw a young guy benching 315 pounds!

I counted his reps, and he went all the way up to eight. It was the same number of repetitions that I aimed for, only I was lifting 135 pounds, which is one 45-pound weight on each side (compared to his three on each side).

In that moment, I felt like I was wasting my time at the gym.

This young beast was leagues ahead of me in terms of physical strength. For the same number of reps, he could lift 180 pounds more than me. That difference is so much that, despite the point I’m making, my pride told me to omit this story.

Pride isn’t a good thing though, so here’s the story!

Others’ Success Is Not a Threat to Yours

I didn’t leave the gym early from discouragement because I realized two things.

1. I can bench press my bodyweight now (150 pounds), which is something I had wanted to do for a long time.

2. LA Fitness has mirrors for walls. Peering into a mirror, I noticed how much stronger I looked than ever before.

In other words, I had a lot of progress to be happy about, and that’s not all that I noticed. Literally one minute before this happened, I saw a man downstairs; he was walking on the treadmill, and he was obese.

I came full circle and realized that here I was feeling embarrassed for my puny bench press, when someone like the guy downstairs could possibly be jealous of my physical conditioning. It helped me understand why the overweight man, the beast, and I should all ignore each other’s progress.

Detach Your Progress from Everyone Else

Unless you’re having a competition with a friendly wager, your personal progress is 100 percent independent from the world and the people in it.

So what if the guy next to me can bench press a small car? That doesn’t impact me unless I make it my new standard.

So what if the guy on the treadmill is out of shape compared to many others at the gym? That doesn’t change what he’s there to do.

Also, there is a difference between using someone else as a representation of where you want to be and letting their success threaten your sense of satisfaction in the progress you’ve made or are making.

If you need to clarify your goal, you can then say something like, “I want the physique of Hugh Jackman.” That’s useful because it gives you a clear target (visually) of where you want to end up.

What I did in the gym did not start with me—it was from the outside in. I saw the guy in the gym, and I interpreted his strength as a strike against the value of my progress and goals.

I think it’s easy to mix up referencing and enviously comparing, because both involve the desire to improve. One is to clarify an idea while the other is a guilt-ridden, envious focus on who are you not.

I think it’s common to be envious of someone’s progress and want to use that as a motivator. But such “negative motivation” is mentally draining and relatively ineffective (guilt and discontentment are short-minded and inferior ways to move forward in life).

There’s something really important I’ve experienced in the last couple of years: amazing progress doesn’t require emotional pain; it only requires consistent effort. From the story, did you notice what seeing the 315-pound bench presser did to me? It made me hesitate to make progress, which doesn’t make sense.

Seeing him bench that much decreased my motivation to exercise because my efforts seemed futile in comparison. Of course, we’re human and we will always look around to see what others are doing, but when it comes to our progress, it seems we’re better off disregarding what we see.

The Permanent Cure for Envy Is Progress

It’s easier to let go of a disappointing comparison to others when you see and know you’re making progress. Otherwise, a sense of futility and despair can set in (and unfortunately, I know this from experience!) I don’t even expect or care to bench 315 pounds, but I know I can continue to get stronger every week, because I’ve proven it.

I mentioned earlier that I can bench press my body weight (150 pounds). Well, a couple years ago, I had a close call in the gym: I couldn’t get the barbell back up on my fourth rep (without a spotter), and I had to duck my head out from underneath the bar as it crashed into the bench.

How do I know it was close? The rough “grip” part of the bar actually scraped my head on the way down! And it was only 115 pounds. I’ve made a ton of progress since then. But if we’re going to make comparisons, let’s go for the extremes.

Since I started my one push-up a day mini habit two years ago, I’ve gained twenty pounds of mostly muscle because the more progress you make, the more you’ll be willing and able to make.

Who or What Is Your Most Bothersome Comparison?

Try this: Think about your version of the 315-pound bench press guy. Does someone else have the fame, power, money, or respect that you crave? Do you know someone who has your dream job?

Whatever you came up with, admit and internalize that it is irrelevant to your journey and personal progress.

There will always be someone who is further along the path than you are in every area. Instead of seeing that as a threat to your success, see it as irrelevant to your success, because it is! I can’t think of a single time that I changed my life because I thought I compared unfavorably to another person. Can you?

It’s great to have other people in life for support, socializing, and new perspectives, but when it comes to your personal progress, it seems best to leave others out of it, and especially so in the early stages of your growth in an area.

If you’re already world class in running, comparisons to other elite athletes might motivate you to get to the next level (and even in a healthy way). But in that case, you already have the solid foundation to build from. Many people don’t have such a powerful foundation, which is possibly why they want to improve, and so the comparison (to someone well ahead of them) makes them overreact.

In my case, I might try to lift too much weight and hurt myself or else quit going to the gym because it’d seem trivial by comparison. That’d be a mistake, as what seems to be a little bit of progress in the world’s eyes can compound and completely change your life.

The only person you have to measure up to is the person you were yesterday. If you can beat that person, trust me, you’re doing very well.