Staying Friends When You Wanted More
By MK Miller 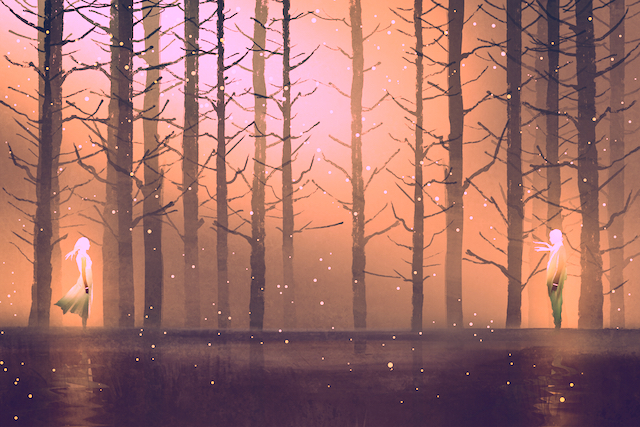 Paul and I had been acquaintances for eight years. When I opened the door to his office one afternoon to offer our usual casual hello, an alchemical change packed a walloping charge through my body.

When had my coworker become a handsome man with whom I suddenly wanted to share more than impersonal cafeteria trays in a crowd?

I’m not sure what flipped the switch for me, but I’d already cheered him when he ran two marathons, listened when his wife left and they divorced, and written while he lived abroad twice serving a medical charity.

We’ve raised money for causes and exchanged myriad e-mails about jobs, travels, and our families—my sister’s marriage, his siblings’ children being born.

While my sudden unspoken desire was to deepen our intimacy, Paul’s signals proved alternately encouraging then confusing.

A promised lunch together that fell through due to sickness; a lingering smile at my door one day turned into distracted “gotta run, department meeting” the next.

Just as I began to understand that he wasn’t interested in me in that way, he’d come back, affectionate and confiding. His long-distance girlfriend had broken up with him or his relative was terminally ill. I’d hug him, nothing further needing to be said.

Nothing further is exactly how our relationship played, while, to my great consternation, we hit a plateau between consolation and water cooler repartee.

Last spring, Paul mentioned a woman he’d met at a conference. Something in his voice gave me the courage to ask if he was dating her. Truthfully, after his honest affirmation, Paul was the last person I wanted to spend more than five minutes with.

Is it possible to make the leap back to platonic good-will? And how?

Seven months later, I’ve discovered I can approach Paul and even enjoy his company for short stretches.

Here are the steps from disappointment to personal growth and healing:

After years of feeling more than I acknowledged, I didn’t take it well when I learned about Paul’s new girlfriend. My roommate found me curled up on the sofa, breaking spontaneously into what I call “the ugly cry.” My appetite swan-dived. Insomnia was my only sleeping companion.

Immediately, I abbreviated contact with Paul.  No more hanging around at the end of the day to chitchat. No e-mail, no notes, no calls. Yes, it was painful, after many years of chatting up Paul whenever I thought of him or wanted to know what was going on in his life, but I also stopped dwelling.

I started volunteering for a children’s charity. I took a hiking trip with friends. I reconnected with family. I read more novels than I thought possible.

I also journaled for the first time in years. For two weeks straight, I woke to write five blessings.

What started out as “I’m so happy I don’t have to face Paul today with puffy eyes and this knot in my heart” turned into observations of my cousin’s laughter, my neighbor’s new puppy’s floppy ears, a test drive of a car I didn’t need to buy, the pearlescent purples of a sunset.

I enjoyed simple pleasures and took time alone to connect with and savor what is. Most of all, I needed to exercise the same compassion and tenderness towards myself that I offer to others.

2. Realize that feelings are fleeting.

My first reaction to Paul’s dating: betrayal. A stream of questions haunted me: What if he marries this woman? They’ll have a baby. They’ll buy a house to remodel together and get a dog. I ran every irrational, worst-case scenario.

Deep breaths and mindful meditation cooled my mind enough to realize that worst-case scenarios serve no one. Disappointment cannot be ignored and yet, like any emotion, it is a passing state, undulating like waves to the shoreline.

We are impermanent beings in flux, and we cannot expect either our relationships or those in our lives to remain static. It was unrealistic of me to believe that Paul would always have time to talk on the phone or share a lunch much less that he would somehow choose to remain single without knowing, forthrightly, my feelings for him.

While I could not rewind time and ask him out directly, I started to see my own irrationalities and inconsistencies as part of what had brought me to this path. My new yearnings, though seemingly powerful, were as fluctuating as those storm-tossed waves.

3. Practice non-attachment: know that one doesn’t own good qualities.

I mourned certain things about Paul during our friendship hiatus: his kindness toward patients, worried families, and all others who crossed his path; his mindfulness of his leadership role; his natural warmth and ability to cheer anyone. Those qualities which attracted me to Paul, I realized, do not solely belong to him.

Six weeks after Paul‘s admission, I met Brian. His humor and insights captivated me. We hiked, we shared long phone conversations, and we offered everyday observations that left us both in stitches. We dated for three months, and while it ultimately didn’t work out after his move for a new job, my time with Brian taught me that my focus had changed from “Life after Paul” to life itself.

I didn’t need to hold fast to Brian to learn from him, just like I don’t need to date Paul to appreciate him and have him in my life, albeit in a new capacity.

As much as I wanted to focus on the sting of rejection and the injustice of Paul not going out with me, the reality is that we’ve all been on the rejecter’s end as well as the rejectee’s.

Paul meant no harm to me. As much as I didn’t want to hear that Paul had chosen to spend his romantic energy on another woman, his intentions had never been to hurt or frustrate me. I have never doubted Paul’s respect for me nor his goodwill towards all sentient beings; as such, he could not lie just to spare my feelings or curb my disappointment.

That respect, though not easy for either of us, is a true surviving gift. Similarly, be respectful and compassionate toward yourself. There are still some days when I see him that I feel attracted. I talk myself through it. I meditate. I call a friend for a walk. I offer forgiveness to myself and practice mindfulness until the feelings pass.

In the past, I’ve cut two exes out of my life. As I reach my mid-thirties, I realize the importance not just of those who are on our “good side” but also acquaintances who teach precious lessons at the precise times we need them.

Paul and I have shared too many years to ignore that we care about each other, still we cannot continue in our old patterns any longer. I’ve also adjusted my expectations—I no longer interpret every smile as a possible pass. Indeed, there’s some relief in this; a smile is just a smile.

Mostly, I consider the value of slowly rebuilding our connection. At first, it was painful to look into his eyes while offering a brief good morning. Just like a child who has fallen off a bike after the training wheels are taken off, it can be daunting to climb back on, balance, and pedal away; but that’s how it’s happened.

We’ve pushed through awkwardness and eased into safe and friendly topics—music, sports, even family—and exercised new boundaries, too.

I don’t talk about his girlfriend, and he no longer hints about my love life. I respect that he has a lady love so I won’t be e-mailing him flirty texts at midnight, and he won’t be asking me if I’d like to go see the new action film with him. It’s an adjustment, but not an impossible one.

Whatever the future holds for Paul, and for me, we have the present company and compassionate understanding that comes from knowing each other for a decade. I need not worry about tomorrow or a perceived lost past. Right now is a listening ear, a nod, a moment shared between reconnected friends—and that is enough to meet this day.

MK Miller has two degrees and limitless curiosity. She has written about a wide array of topics– including the cultural significance of go-go boots. She rides her bike almost daily, pays bills monthly, and collects books and shoes perennially.

Book Giveaway – Random Acts of Kindness: Then and Now