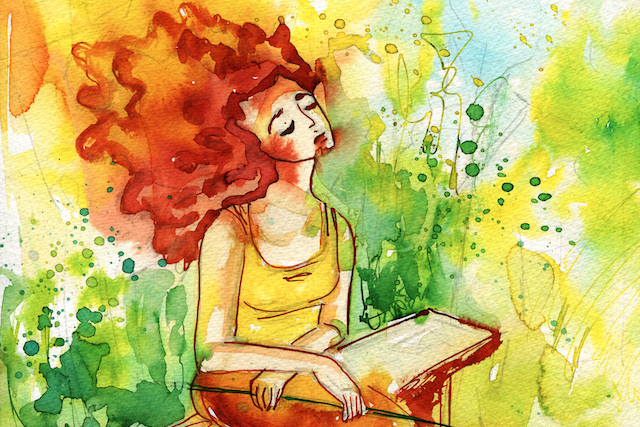 Four years ago I spent the better part of a year being silent.

A friend had told me that in silence, the bits of you that need healing heal themselves. He was talking about the bits of me that had pushed me until I was sick and depressed, too anxious to answer the door.

I call it my year of silence, but it was more like a year of “doing nothing” because I wasn’t silently reading a book or silently reorganizing my cutlery drawer; I was just sitting. The not doing was the really challenging part.

Much of what I learned from that year was different to what I’d expected. Five things that surprised me the most were:

My brief going in was “The less you do, the better.” Things I’d considered useful and productive—reading, writing, talking, cooking, and even cleaning—were now distractions. “Let your thoughts run,” my friend said. “Notice them if you want to, but leave them to themselves.”

After five days I called and said, “I feel like I used to when I meditated.”

I didn’t get it. Meditation is when you focus on one thing; I was letting my mind leap about. But when you sit without distractions you start to see your thoughts for what they are, just thoughts, and as you do, you reconnect with the you beneath your thoughts.

I saw a poster recently that said, “I missed meditation today, which makes seven years in a row.” That’s pretty much how I used to feel too.

Now I know that every time I just sit, without distraction, even if it’s for half an hour, it’s meditation.

2. The din of silence

It’s like pulling up a chair with your harshest, most foul-mouthed critic and saying, “Okay, tell me what you really think?”

And while there were some “I’m connected to all things” times, there were also the “I want to stab myself” times. (I’m only half kidding.)

Think of your mind as a spoiled child indulged with toys and shiny objects its whole life— books to read, things to watch, goals to work toward, scrabble.

When you do nothing, there are no toys.

Here’s a poem I wrote in one of my sneaky, writing moments.

Having a Knees Up
The only place my
head wants to be, is
under the covers
close to my knees.

There is no uplifting message to this point; just wanted to say, it can get gnarly.

3. A year of minutes

Your mind is a doing things junkie. It almost doesn’t care what you do.

It’s like a heroin addict. No heroin? I’ll take crack. Finished the last episode of Walking Dead; I’ll take the video of the cat in a shark suit.

I began this not doing lark for just one day, but I carried on because, for the first time in a long time, it felt right. My mind, however, thought I was a loser. It said things like:

“How are you going to get anywhere like this?!”
“Let’s start a blog and write about this.”
“Elizabeth Gilbert went to India. You should go to India.”
“Oh, learn Māori. You’ve always wanted to do that.”

The urge to do was gargantuan. It was also epic. Mighty. And colossal. Thank you thesaurus, I think we’ve made our point.

And it was made worse by all the cool ideas I was having. Silence does that. And a few of them were actually cool.

My mind was relentless.

Early on I realized the challenge wasn’t doing this for a year, but hanging-in until lunchtime.

The only way through was minute by minute. Not in thinking how awesomely silent I’d been the day before—nice thought—or thinking about what lay ahead, but by being present in the moment.

As time went on it got easier. My mind got tired of being ignored and stopped talking so much.

4. The wrong guy for the job

There is nothing like watching your mind to really get to know it.

I hadn’t realized how bossy it was. How much it worried. Or that it’s so terrified of change it’ll do anything to maintain the status quo, even when the status quo is you being too anxious to answer the door, or whatever hole/habit you might be stuck in.

I began to understand my mind’s basic nature. And how the most important thing to the mind is to be alert for danger.

I realized that the problem wasn’t my mind—it was me. I’d given it the wrong job. I’d mistakenly put it in charge of my life.

When I had an idea to do something, my mind said, “But no one else does it like that.” And so I didn’t either.

I constantly allowed my mind to overrule deeper wisdom and natural desire. I didn’t allow the rhythm and energy of life to flow through me; I tried to control it.

Letting your mind rule your life is like asking your inner eight year old to organize the next presidential campaign; she doesn’t know how and spends most of her time trying to look good in front of her friends.

Silence comes in different shapes. Silence is meditation. Silence is doing nothing. Silence can be standing in line without checking your phone.

But I also learned something far deeper and even more important; the cat inside the shark suit…

Human beings try hard. At everything. For instance, at one stage I tried so hard at doing nothing that I became phobic. (Yep.) And you might be thinking, if I were silent for a year I could be as calm and relaxed as Lisa is.

Firstly, ha ha about me feeling calm all the time. Secondly, that’s your mind talking.

The key to feeling self-assured and peaceful doesn’t come from some arduous journey, like being silent for a year, but in living life day to day.

People often ask me, but how do I feel calm and “positive” all the time? The answer: you don’t. Stop trying to. And when you do, gradually the moments that feel good start to expand and the ones that don’t start to recede.

Practicing acceptance is the master key.

The Power of Silence: How to Free Yourself from Painful Thoughts