How to Stop Fearing Disapproval: 3 Lessons from Accepting Judgment
By Lori Deschene 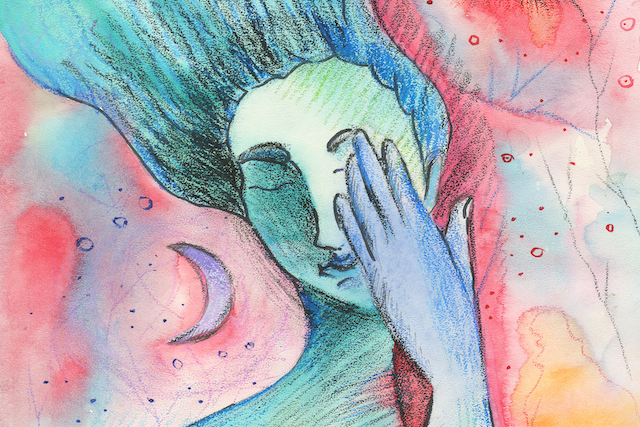 “Lean too much on the approval of people, and it becomes a bed of thorns.” ~Tehyi Hsieh

I remember reading somewhere that the best way to face a fear is through repeated exposure.

In the case of my lifelong need for approval, I have found this to be true.

For as long as I can remember, I have wanted, needed everyone to like me. And not just like me, but agree with and sanction my every choice through obvious signs of validation.

I remember auditioning for a community theater production of Annie when I was twelve.

My older sister, Tara—thinner, more popular, and, by my estimation, more talented—sang before me, and seemed to knock it out of the park.

With a bold, Ethel Merman-like voice and a petite, 5’1” frame, you might have expected to see a hefty female ventriloquist offstage, throwing her voice while Tara lip-synced.

But that was, in fact, her voice. It was larger than life, like her—and decidedly unlike me. I may have seemed like a quiet, shrinking violet type, but you’d likely have concluded otherwise if you heard the boisterous noise in my head.

I believed everyone was constantly judging me, and I was terrified of those thoughts I couldn’t hear.

By the time Tara belted out “You’re only a day away,” I had nearly collapsed into a hysterical ball of panic within a corner of my mind.

I dreaded following her, both because I knew she was superior in every way possible and I hated being critiqued.

Within five seconds of starting my song, I felt a quiver in my voice that seemed like it might have been a ripple effect of the trembling in my knees. Except it wasn’t. It was just sheer terror.

Everyone was watching me—which people do when you’re on stage. And a part of me craved that, needed that. I desperately wanted them to like me, to cheer for me, to believe in me and want me there.

That’s not what I felt was happening right then. I was sure that everyone would laugh at me behind my back because I plain and simply wasn’t good enough.

It felt all but certain in the next instant, when I attempted a belting, vibrato-like note and instead cracked loudly and obviously.

Right then—that’s the moment when I decided that a woman named Sandy, soon to be cast as Miss Hannigan, hated me. And why?

She hated me, I concluded, because she gave me “a look.” Crack + look = repulsion and revulsion, at least to my twelve-year-old mind.

Never mind that I couldn’t be certain that she did, in fact, look any different than usual. And forget for a minute the perhaps obvious alternative—that if she did look different, it may have actually been compassion.

To me, her facial features melted together into an expression of absolute condemnation, and it was the physical representation of what I imagined everyone else was thinking, too: I was a pathetic joke.

Flash forward many years later, and I’d learned to stuff down my insecurity with a long list of self-destructive behaviors, from bulimic rituals to occasional acts of self-harm.

I frequently tortured and punished myself for reasons varied enough to fill more than a decade of therapy, but I think it was mostly an attempt to beat other people to it.

It plain and simply hurts less to be rejected if you’ve already rejected yourself, and you’re already hurting.

I was always hurting.

Over the years, I was less often rejected, primarily because I minimized opportunities. It was a tactic I learned when dealing with intense bullying in school—it’s a lot safer to just not show up.

I remember many times sitting in my room, looking at my window and imagining it was a TV screen. That’s what life outside it felt like—something to watch, not join.

I’ve written quite a bit about the time between deciding to be part of the world and now, but in case you haven’t read any of it, here’s a haiku that sums up those experiences:

By the time I started my first blog, I’d come a long way, but I was more “feeling the fear and doing it anyway” than experiencing relief from the fears.

The first time I published a blog post, I watched the comments like the proverbial not-yet-boiling kettle—hoping for a little sizzle but afraid of getting burned.

When the comments started coming in, it was feast or famine. I felt either a rush of acceptance-and-approval-triggered endorphins or the overwhelming anxiety of not being able to fight or flee in the face of judgment and criticism.

It was magic or misery, the experience of writing online—instant gratification or self-recrimination.

And that’s how I knew I needed to keep at it, to share my struggles, successes, and lessons even though I was far from perfect; perhaps I could be good for others and in doing so be good for me.

On some level, I craved the joy of knowing I’d created something others liked. But somewhere inside, I also craved the criticism.

No, I’m not a total masochist. I craved it because I knew that each time I confronted it, I could get better at dealing with it.

As I look back on the past several years, and the almost two-decade journey of insecurity and growth before it, I am amazed to realize I have. I have gotten better at dealing with it.

I’m by no means impervious to feelings of self-doubt, but as a consequence of putting myself out there in varied ways over and over again, out there feels a lot less scary. And here is why that is…

1. I’ve learned that the “looks” are sometimes in our head—and when they’re not, we often have no idea what’s really behind them.

Since we can’t know what’s on someone else’s mind unless they tell us, we can either offer a compassionate look back in case they need it, or take a curious look within to explore our own reaction.

Anything else is a waste of energy—and over something we likely won’t remember for long.

2. I’ve learned that people will sometimes vocalize their opinions harshly and insensitively.

Conventional wisdom may suggest ignoring them—not letting “the haters” get us down.

More often than not, it won’t be about hate. It will be about pain—theirs.

We can feed off that and add to our own, or we can hear them out, look for seeds of truth, and leave behind whatever won’t help us grow.

We all “crack” every now and then, in one way or another. Outsiders may poke those shattered parts, right when we’re most vulnerable.

But those fissures don’t have to mean anything about us, regardless of what others conclude. If anything, they can mean we have an opportunity to learn, grow, and prosper. As Leonard Cohen wrote, “There’s a crack in everything. That’s how the light gets in.”

Equally important, that’s how the light gets out.

Perhaps that’s the greatest gift of this whole repeated exposure thing, the cyclical nature of it all—we’re all on both sides of this coin, showing up and being shown up for, seeing and being seen.

We’re all powerful and fragile, breakable and strong. We each have the potential to hurt and to heal. Sometimes, oftentimes, it all blends together.

And that’s something I’ve learned to like more than knowing you like me: the inevitability of all of us helping each other, whether we intend to or not.

So here’s to showing up, repeatedly. Here’s to being seen. And here’s to forgiving ourselves when we hide so we can let it go and then show up again.

We don’t always need to stand center stage. We just need to know we gain more than we lose when we’re open to the light.