Stop Running from Your Life and Start Living It
By Mima 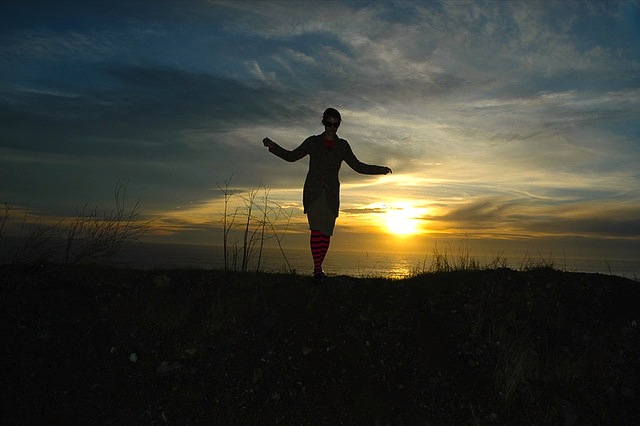 I spent most of my life running. I ran from people, commitments, physical locations, and most of all, myself. And if I wasn’t running, I was definitely thinking about it.

I always had great excuses. I wasn’t happy, didn’t fit in, wasn’t comfortable—the excuses were never ending. I was rarely content. So in late 2010, I decided that the best solution was to sell everything, uproot, and move across country.

The problem with always running is that eventually you grow exhausted.

Alone in an unfamiliar city, I first thought my depression was due to the vast changes in my life. Not only had I left a relatively small city for one of the largest in Canada, I was jobless, friendless, and scared out of my mind. That’s when things started to fall apart.

Little by little, everything began to crumble. My self-esteem, confidence, and self-assurance were evaporating, and I didn’t understand what was going on. I had never stopped long enough to take a good look at my life, so I didn’t even know myself.

I didn’t want to know myself.

By 2012, I lost interest in most activities that once fulfilled my life. I went through cycles of depression, hopelessness, and panic. I was certain that the world moved ahead and I had fallen behind everyone else.

I was completely broken and, unlike the other times when I’d struggled, I didn’t think I could be repaired.

I attempted counseling but it didn’t help. It just seemed like the layers of my issues weren’t only psychological, but also spiritual. Sure, everything had a logical solution, but it didn’t necessarily give me any comfort.

Talking to friends wasn’t helpful either. In fact, in some cases it seemed to make me feel worse.

I sought books and blogs to find the help I needed. The miraculous thing is that once I started to look for solutions, one by one, I found the exact reading material I needed at that very moment. One little molecule at a time, I felt like I was being rebuilt.

Then everything took an abrupt turn.

It was the first weekend in September and I was sitting outside on a beautiful day, feeling a deep sense of peace and relaxation. Maybe, I decided, things were starting to look up. Maybe everything was finally coming together.

That night I had an intense dream where I was in a mad rush to find a specific person in order to finish a task. I finally found him and he held up a baby for me to see. The child kissed her tiny fingers, then touched my face and in an adult voice said, “I love you.”

Immediately, I thought that one of my close friends back home, who was a spiritual person, would understand the intensity I felt over such a dream. We often discussed our personal struggles and successes, encouraging and helping each other in our journey. She was a big believer in synchronicity and would be elated to learn that I had this positive sign.

Before I had a chance to contact her, I found out the terrible news: She had been killed in a car accident the previous day.

Once I got over the shock and disbelief, I felt that the dream was a message from her. We always talked about “signs,” and since she loved children (and was actually a teacher), it made sense that she would communicate with me through a child.

I felt a great deal of grief over her death, but the dream left me with an unexpected sense of hope.

I thought about the kind of person she was; she was adventurous, always tried to see the good in others, and lived in the moment. I also thought about how she admired my fiery, direct, and honest attitude. That’s when I realized it was time to bring that person back.

Although I continued to struggle for the upcoming months, I was feeling a tinge of hope that I hadn’t felt in a long time.

In late 2012, I was shocked to learn that two more of my friends had died—both were young and had a short bout with cancer.

It was yet another reminder that we are only given so many days, so much time, and we should use it on things and people that matter to us.

I ended a friendship that was draining and hurtful. I also put a lot less focus on those who didn’t bring something positive to the table, instead focusing on those who made me laugh and were a joy to be around.

But even then, I didn’t feel completely fulfilled and often found myself falling into my old, negative thought patterns, usually coinciding with the end of the week.

Then I took a friend’s advice and picked up a book by Louise Hay. It changed my life.

In one of her books, she outlines an exercise that requires the reader to visualize themselves as a child of five or six. You have to envision yourself looking into your own eyes as a child. I did so and the first thought that ran through my head was, “I’m sorry that I ruined your life.”

I immediately broke down. I never cried with such intensity before. Until that moment, I had never realized that this was my central thought for so long.

No wonder I felt so miserable and defeated. Telling anyone that they ruined your life is a pretty broad statement—and yet, I was telling this to myself everyday.

Things didn’t become perfect after that day, but I saw some immediate changes. I felt lighter and slept better than I had before. I was calmer and centered in a way I had never experienced in my life; it was a new normal for me.

I had spent so many years racing away from my thoughts, feelings, fears, and insecurities because the idea of dealing with them was overwhelming. But it had to happen.

I no longer run away because I know it doesn’t bring you true happiness. I face each situation with courage, but mostly, I follow my instincts and do what feels right. It hasn’t steered me wrong yet.

I’m not suggesting that every day is magical, wonderful, and full of pink unicorns. (I wish!) But I’ve learned that the key is to accept yourself with the same love and compassion as you would for the most important person in your life.

Really, it should be one in the same.