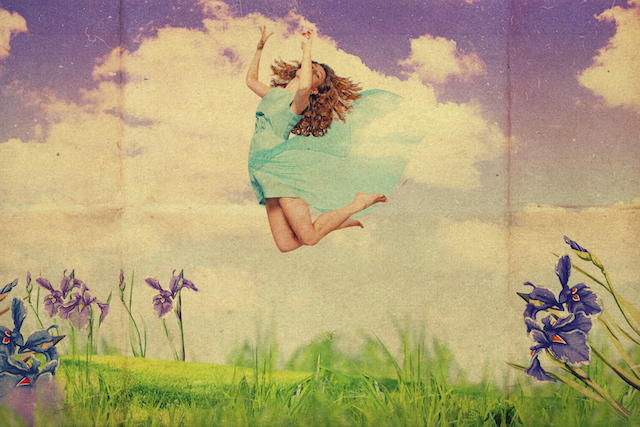 I’ve struggled with it.

It’s not that I haven’t tried. Believe me, I’ve tried really hard. I’ve written goodbye letters, mentally cut the energetic cords, and fiercely gone back into the pain to free myself fully from it. I’ve cried my eyes out, talked about it, and brought it to my meditation pillow.

What I’ve tried has helped to some extent, but not completely. So, instead of moving on I’ve felt stuck between my past and my future. You know, like in limbo. And that’s not the place to set up camp; both you and I know that.

It’s frustrating because I’m fully aware of the importance of letting go and moving on. I know that attachment is the reason we suffer. I know that past pain, anger, and resentment holds us back. I know that holding on to the unwanted blocks the wanted from coming in.

Letting go is essential. But, it’s not always easy to apply theory to practice. If you’ve also struggled with it, here’s another approach that has helped me to truly let go and move on.

Why Letting Go is Hard

First of all, everything is energy. Our thoughts and feelings emit a vibration, and what we send out to the world is what we receive back. This isn’t some woo-woo thing—it’s quantum physics (source).

Mother Theresa knew about this. She said, “I was once asked why I don’t participate in anti-war demonstrations. I said that I will never do that, but as soon as you have a pro-peace rally, I’ll be there.”

An anti-war demonstration focuses on war, which triggers feelings such as frustration, anger, and hopelessness. A pro-peace rally, on the other hand, focuses on peace.

The same goes for letting go. Unless you’re able to truly let it go—meaning that you withdraw your attention completely from it—you’re more likely to focus on the unwanted and thus draw more of that into your life.

You cannot reject or push against the unwanted. You cannot focus on a problem and find the solution. Because the solution is never where the problem is. So, you need to shift focus.

You shift focus by first accepting what is. If you want to let go of shame, start by first accepting that you’re feeling shameful. Don’t argue with your thoughts and feelings. Don’t resist them. Don’t try to push them away. Instead, give them permission to exist.

As Eckhart Tolle said, “Whatever the present moment contains, accept it as if you had chosen it. Always work with it, not against it.” To reach complete acceptance, spiritual teacher Bentinho Massaro suggests a technique where you agree with your limiting and hurtful thoughts.

This doesn’t mean that what you’re saying is true. Instead, it’s a tool to control negative thoughts and emotions so they don’t control you. By agreeing with them, the battle between you and them ends. When there’s nothing more to argue about, they lose their power over you. Touché.

Step 2: Let in instead of letting go.

Once you’ve reached a place of complete acceptance, you can move on to the second step.

This is about inviting the new.

Letting go can easily trigger fear. When you leave something behind and don’t know what to replace it with, you leave space for the unknown. Change is always scary, especially when you don’t know what’s coming next. That’s why you might find yourself clinging to the unwanted because that’s what’s familiar and known to you.

To make sure that doesn’t happen, consciously decide what’s coming next. Let in instead of letting go. Rather than pushing away the unwanted, invite the wanted.

When I left my corporate job in search of a higher calling, I battled with shame. Shame for stepping off the beaten path, for making a controversial choice, and for not having a clear path in front of me.

It was when I finally stopped fighting shame that I was able to see clearly. That’s when I could invite curiosity to join me instead. Curiosity did the exact opposite of shame; it helped me see the opportunities, not pitfalls, of the unknown and taking the road less traveled.

This can be done step by step. For example, let’s say that you want to move on from an ex-love. Maybe your focus isn’t on attracting a new partner directly, but rather on inviting a happier, healthier, and more loving version of yourself. Then once you feel ready, you can invite in the relationship you long for.

Focus On What You Desire

Instead of trying harder to let go, accept fully where you are. Embrace it completely. Say yes to all worry, shame, and guilt. Confirm all the negative thoughts and feelings so that you can release yourself from their grip. Simply, give up the battle.

Then, invite what you desire. Imagine, visualize, and fantasize what you’d love to have instead in your life. Tony Robbins said, “Where focus grows, energy flows.” Focus on the wanted, not the unwanted.

Maria Stenvinkel is on a mission to help you move from fear to fearless—and to unleash your confidence, greater potential, and true self-love. Download her free and powerful worksheet: "The Secret to Boosting Your Self-Confidence [Easy Worksheet]."