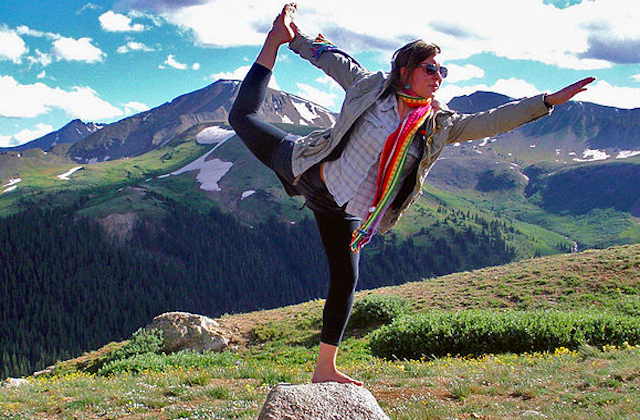 “Your body is precious. It is our vehicle for awakening. Treat it with care.” ~Buddha

Our bodies are not indestructible, and there is only so far we can push them before they start to fail. I should know.

Roughly three years have passed since my body became unwell, for whatever reasons. Despite suffering from extreme exhaustion and constant joint and muscle pains, like those you get when you have the flu, I’ve only just started to listen.

I guess the reason it’s taken me so long to do this is because I’m still holding onto the life I had before my usual activities began putting me in bed for days at a time. (I finished my degree at university and then went on to another part-time course for two years, while holding down two part-time jobs and running a student newspaper.)

After a year, I swapped being an editor for being a teacher and took up my teaching qualification. Amidst all of that, I moved onto a wreck of a boat, was without a bedroom for around four months, suffered a bereavement, and struggled to skim the edges of a mental breakdown as my depression reached critical mass.

My mental health has always been open to interpretation and discussion, but in my many years of happy insanity, my physical health has never suffered like it does now.

I’ve spent nearly a year improving my mental health by changing my attitudes, being more mindful, and practicing compassion and happiness. These things are ongoing, but I’ve given very little time to my body in the process.

I have to admit that I’m not a huge fan of this one because physical activity actually compounds the problems I experience with my body. But occasionally, when my joints aren’t screaming, I make sure that I keep my limbs limber by going for a gentle walk.

I’m slowly working my way towards practicing some basic yoga, too, but I’m having to take my time with that ambition.

This is the point of exercising your body–only do what your body can manage if you’re struggling, as there’s no point in making things harder. Even a little activity can have a huge impact.

If you’re tired, even if you feel that you need to get more done, give yourself permission to sleep. I ignored this simple notion for nearly a year when I first started feeling unwell. Now that I embrace it, my body thanks me for it. (You can read 9 tips to get better sleep here).

Admittedly, my condition keeps rest and sleep from being as refreshing as they might be for other people, but it still makes a difference. It stops me from doing further damage.

We’re encouraged to be increasingly mindful of what we eat nowadays, and for good reason considering the state of the food we consume. I’d like to encourage you, however, to turn your attention inward for a moment and think about eating as more than a bland necessity or ethical conundrum. Food is fuel, and we need it to function optimally

Eating well means feeding your body what it needs, in the most natural way you can manage and afford. Changing how you eat doesn’t need to be an all-or-nothing thing. Maybe you could add just an extra bit of fruit a day or swap a cup of coffee for a glass of water instead.

Relish the food you eat too, and take your time. Paying attention to flavors, textures, and smells, even the mechanical act of eating can soothe our bodies and reawaken us to the sensations of being alive. How long has it been since you’ve recognized your body like this?

When something hurts, something somewhere has gone wrong, and your body is trying to tell you that. We often pay no attention to pain unless it becomes unbearable: that tooth ache isn’t so bad, it can wait for a while; the sharp tugging in my shoulder is a result of repetitive strain but it usually goes by the time I’m home, so no need to worry.

These things, no matter how small, shouldn’t be brushed aside because they represent damage to our bodies. Ignore them and they could come back to haunt you later.

Because I’m still clinging on to the self that existed before I was feeling so rubbish, I tend to think I’m untouchable. I end up taking on way too much and then running around like a maniac. I can probably manage about two days of this sort of activity before I collapse and end up in bed.

If you’re likely to do the same as me, then I won’t be surprised if you scoff at the suggestion that you slow down. We all have so much to do and so little time to do it in and you want me to slow down? Who has time for that?

Rephrase the question: who doesn’t have time for that? The answer: our bodies.

If we squeeze every second out of our day at record speed, our flesh, bones, muscles, organs—the whole lot—will eventually suffer.

Since accepting my physical condition, I’ve become a slow life advocate. I have to live slowly for the sake of my body, and you know what? I quite like it!

I like that I only ever sit and write for two, maybe three hours tops, for a day. I like that I take whole days off to give my body time to recover.

Our bodies are precious, so why do we neglect them on such basic levels so often? A serene mind really is nothing without a healthy body to carry it. So take an hour—yes an hour!—out of your day a few times a week to care for it. Sleep, eat, rest, get a massage. Wind things down. Pay attention.

Show your body the same compassion that you endeavor to show everyone. It needs it just as much.