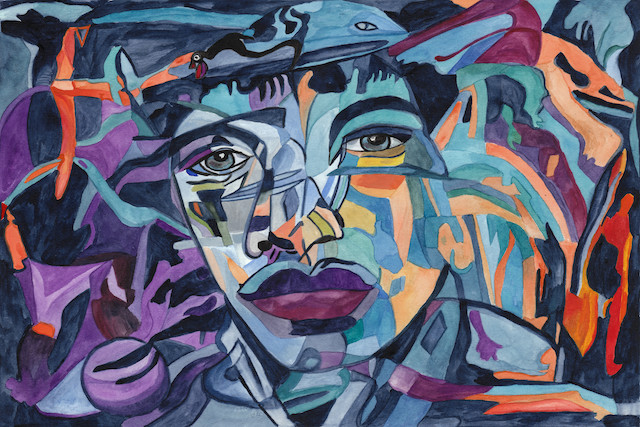 “I used to dislike being sensitive. I thought it made me weak. But take away that single trait, and you take away the very essence of who I am. You take away my conscience, my ability to empathize, my intuition, my creativity, my deep appreciation of the little things, my vivid inner life, my keen awareness of others pain and my passion for it all.” ~Caitlin Jap

Unsurprisingly, given my sensitivity, I struggled to fit in when I was growing up in the loud and vibrant 1970s, a decade not known for its subtlety.

I was unbearably sensitive and relentlessly teased for crying or overreacting to things.

If I didn’t understand something the teacher was trying to tell me, I would start to cry. If friends didn’t want to play with me, I would cry some more. I would obsess over every single thing anyone said to me. Hardly surprising then that I was a lonely and friendless child as everybody must have felt they had to walk on eggshells around me.

There were countless anxious school lunchtimes when I clutched my plastic blue tray and agonized about whether or not anyone would sit with me. They rarely did.

PE sessions were another torture as, of course, the team leaders picked everyone but me for their team. I don’t blame them. I didn’t have the competitive and confident streak needed to win. My lessons were mostly spent sitting on a table alone, and break times were largely spent hiding from my exuberant peers.

I lived life through the lens of my heart. I couldn’t separate myself from anyone or anything. Lacking the ability to set boundaries, I didn’t know where I ended and other people began.

This theme of not fitting in continued into my adult life. If only I had understood earlier that I needed to stop trying to fit in. I needed to educate myself about what it really means to be a sensitive soul. Someone who notices things, reflects deeply, and cares about others and how they are feeling.

Dig deep enough and there are stacks of research out there to show being sensitive, feeling your way through life, is a strength. You understand that your empathy and intuition have healing and transformative powers and are a source of connection and creativity.

If you think being sensitive means being a shy ‘cry baby’ you have seriously got this wrong (though, yes, many sensitive people cry a lot). It’s just one of several common and frustrating misconceptions about sensitivity:

1. Sensitive people are all shy and introverted.

There are sensitive extroverts, too—about 30 percent of sensitives are extroverts. Sensitive people tend to need alone time to recharge after being in overstimulating environments, much like introverts, but they may still get energy from being around other people. Which means they need to find the right balance between social time and downtime so that they feel connected but not drained.

Many defining characteristics of sensitive people, such as their empathy, passion, and creativity, make them exceptional business leaders or influencers on the world stage, for example, Walt Disney, Jacinda Arden, John Lennon, and Princess Diana to name but a few.

3. Sensitive people are pushovers who have no firm convictions of their own.

Empathy is a defining characteristic of sensitives, but it is not an endorsement of another person’s viewpoint; rather it’s simply respecting and listening to that viewpoint. You can validate and respect someone’s perspective and still choose to live by your own principles.

5. Sensitivity is a women’s issue.

Up to 50 percent of sensitives are men. Boys and men are often taught to suppress their emotions to appear tough, strong, and masculine, but this often causes depression, anxiety, and low self-esteem—because no one can choose not to be sensitive. They feel ashamed of their sensitivity but need to understand that real men do cry.

6. Gay men are prone to being sensitive.

This is a social stereotype that equates being gay with being more feminine and, as stated above, sensitivity is not a feminine issue.

7. Highly sensitive people are prone to depression and anxiety.

There may be an increased risk of anxiety, but depression is a medical condition that needs treatment and many factors contribute to the likelihood of experiencing it. Lack of self-awareness and acceptance, whether a person is sensitive or not, can also increase the risk of depression.

8. There is a strong link between hypersensitivity and autism.

Those with autism may well have sensory issues, for example, finding things like bright lights or loud noises overwhelming, but this does not mean that everyone with sensory issues has autism. There are major differences between high sensitivity and autism, but chiefly autism comes with ‘social deficits’ (less response in brain areas associated with empathy) and high sensitivity does not.

9. Sensitive people are too weak and self-doubting to become effective leaders, stand up to narcissists, or succeed in a harsh and critical world.

Not so. Once they are armed with self-awareness and the tools and techniques to turn their gentleness into a strength, sensitive people are an unbeatable force.

10. All empaths are sensitive.

Sensitive people are empaths because they feel what others feel. But not all empaths are sensitive, i.e. they soak up emotions but not all the other stimuli from an environment as sensitives tend to do.

11. Sensitive people need to ‘toughen up.’

They can’t, because being sensitive is who they are. They are born that way.

I used to buy into all these negative associations, especially the notion that a sensitive person needs to ‘toughen up.’ They simply can’t. It’s like telling someone who is taller than average that they should be shorter. Just as being tall is not a flaw, being sensitive is not a flaw. It is not an illness, or a choice people make, either. It is how they are born.

According to experts, it is an innate trait with research indicating that at least three sets of genes may contribute to it. Some highly sensitive people may have all or some of these ‘sensitive’ genes, and intriguingly all three impact the brain and nervous system in some way.

Sensitive people are born to be gentle and to experience life on high alert through the lens of their feelings and senses. They are not better or worse than anyone else, just different.

Although they may have traits in common, they are not all the same. Every sensitive person is unique, just as every person who is taller than average is unique.

Indeed, the fact that the genetic coding for sensitivity continues to survive natural selection suggests that for evolutionary reasons, for the survival of the human race, it is beneficial that some people can see, feel, and sense things others cannot. It offers an evolutionary advantage and exists, and will continue to exist, because it is the one true force that drives humanity toward greater connection.

Empathy, intuition, creativity, gentleness, and compassion are personality traits that unite rather than divide, and they are all defining traits of the highly sensitive individual.

In a nutshell, we are all born with a unique genetic code. The key to a fulfilling life is not to repress, deny, or try to hide our uniqueness but to make the most of what life has given us. If you are sensitive, it is essential that you understand this is not a weakness. Rather, it is a strength, and a potentially healing gift both for yourself and for the human race.

Theresa Cheung is a Sunday Times bestselling author. She has a Master’s degree in Theology and English from King’s College Cambridge. Her work has been featured in the Daily Mail, Daily Express, The Guardian and she has appeared on ITV, GMTV, BBC radio and Russell Brand’s Under the Skin podcast. Most recently, Theresa has set up her own podcast, White Shores, interviewing some of the world’s greatest minds and sharing inspiration on personal growth. More about Theresa here: www.theresacheung.com

Your Emotions Will Not Drown You; They Will Save You

30 Reminders for Sensitive People Who Feel Drained, Ashamed, or Judged