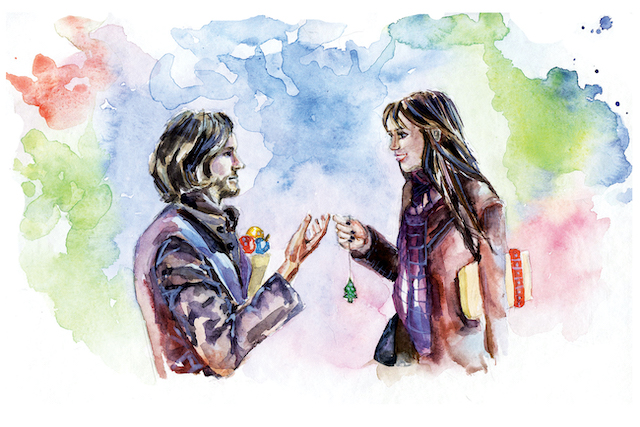 Ever since elementary school, I have had a built-in network of friends, family, and colleagues who make up my rock solid foundation of support.

But recently, I’ve been struggling with being alone and desperate for human interaction—more specifically conversation and affirmation; and conversation that includes affirmation of my creative choices would be the holy grail of friendship.

Two months ago I moved to a new city where I knew exactly two people; one was my cousin who I hadn’t seen in over fifteen years and the other was an old co-worker’s sister (which, come to think of it, doesn’t really count as knowing someone, does it?)

Both have become wonderful companions, who I see every other week or so and share many commonalities with. But I wanted a deeper friendship, someone to tell me that, yes, I had gained a little weight and tomorrow we’d go the gym.

Normally I shied away from strangers, skeptical of their intentions, but if I kept that up I’d meet no one. So, in a bit of a social experiment (forged by pure desperation), I decided to strike up a conversation with someone new every day.

So far, about 90 percent of the conversations end with a simple thank you and us parting ways, never to meet again. But the other 10 percent of my attempts have been eye-opening.

Today, for instance, while at the gym, I met this stunning woman, whose legs were reason enough for me to hate her. But I smiled sweetly and asked her how she was doing. Ten minutes later I had learned that she ate extremely healthy and worked out every day (hence the amazing figure), but also that she was the mother of a five-year-old girl.

I told her I was a writer, working on my first novel, and her eyes lit up as she said, “I was at the park the other day and I thought to myself, I should bring my daughter out here to color or paint or something. Just to get her creative juices flowing.” She loved the idea of seeing her little girl as an artist.

As someone who’s walked the creative path, I know that I wouldn’t be here without the people who love me having made some sacrifices on my behalf. And I saw reflected in this stranger, with a permanent furrowed brow of worry, the willingness to be that sacrifice.

We’re taught as kids that we should dream big and follow our dreams regardless of the number of obstacles put in front of us. Yet, when we grow into adults the world seems to shift and the dreams we once had get lost in logistics and practicality.

So the legacy is passed on to our children until luck reaches a generation whose dreams really do come true.

Because of my age, (I’m twenty-six) I often meet people who are in transition or just plain lost. Two days ago, I asked the guy sitting next to me at a bus stop what he did for a living, and he sheepishly looked to floor before telling me that had just passed the bar in Chicago, which, as he put it, “makes me an unemployed lawyer.”

I smiled sympathetically because what else could I do? But when we both simultaneously stood up to exit the bus at 8th St., I blurted, “Let me buy you a drink.”

He accepted because the role reversal was interesting, but argued that it felt strange to let me. There were no romantic feelings, just a stranger lending an ear. Twenty minutes later, he thanked me for giving him a break from himself, and we parted ways without so much as an exchange of names.

Complex lives are what make us three-dimensional, and no two people that I have met share the same story, but everyone has problems.

Maybe it says something about our society that happiness is always fleeting. But in my exchange with the lawyer I got to be one of those moments.

A few years ago, a lady in her mid forties brushed past me in the grocery store knocking the basket I was carrying over and causing its contents to spill about. I was livid, as I too was having a particularly bad day, so I let out an exasperated profanity (or two) and bent over to start picking things up. “I’m sorry,” she said, “I’m just having the worst day.”

I looked up ready to rip her a new one, but my anger was diffused almost immediately when I saw the look on her face. I’d seen it in my own reflection so many times—pure defeat.

Making light of the situation, I said, “It’s okay; I’ll just tell them the eggs were already broken.” She laughed, offered to pay for my groceries (including the broken eggs, which the manager was not amused about), and we had coffee at the little Coffee Bean inside the store.

She had just been diagnosed with stage-4 breast cancer—something I would’ve never known had I stormed off in anger.

“You have my full permission to knock over anyone you want coming through that door,” I said, and she smiled.

I regret not asking for her information, but that one incident is the reason I no longer get angry when someone bumps into me, or cuts me off in traffic, and it’s also probably why I am so intrigued by strangers.

No one carries a sign around on their back advertising their problems. So I can’t ever know what someone’s life is like unless they tell me.

But if an act of kindness has the ability to shift someone’s bad day into a better one, then why not try to be that change?

Often I have wondered why a compliment from a stranger causes an instant eruption of smiles; yet, when my friends tell me how talented I am, the response is always, “Do you really think?” or “I hope so.” And now I know.

It’s because people I don’t know have no reason to go out of their way to tell me something they didn’t believe was true.

I started out being nice as a means to build friendships, but found a gratifying connection in my everyday interactions with strangers instead.

Everyone has a battle that they’re fighting, and as people who occupy the same traveling spaces we should try to treat each other like neighbors, because for that moment while we’re standing next to each other, that’s exactly what we are.

11 Ways to Turn Strangers into Friends