The Difference Between Letting Go and Running Away
By Emily Gregory 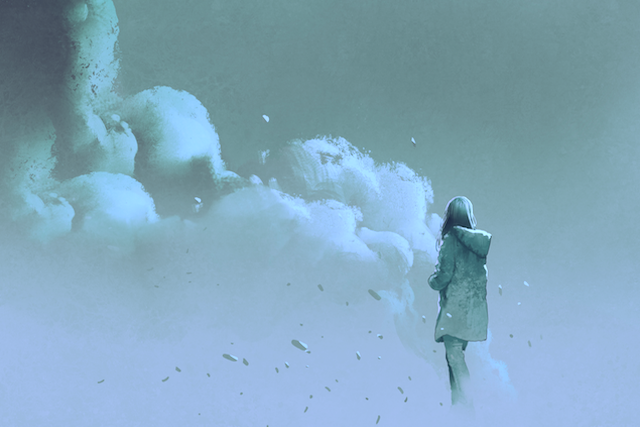 “It’s about our ability to leave our death on the battlefield of life. Or having the strength and courage to give them our love and to bring them back.” ~Edward Frenkel

It took me almost twenty years to realize that running away from ourselves isn’t the same as letting go. That realization, as with so many others, came at a time when I was at one of my lowest points.

The day everything changed began as one of the worst of my life.

I was struggling with the breakup of a long-term relationship. We’d been due to move in together when I discovered he’d betrayed my trust so badly that remaining in a relationship was impossible.

I was working long hours in a job I’d grown to hate and I was exhausted. I was barely sleeping, and when I did it was the kind of nightmare-filled, fitful sleep that took forever to return from.

I’d wake up each morning feeling as though I’d been in a battle as I slept. My fatigue was so overwhelming that I could barely manage to keep my house clean and parent my son.

I was beat, emotionally, physically, and spiritually.

My son was staying with his grandmother for the weekend, and once I no longer had to hold it together for him the floodgates opened. It was more than the loss of the man I’d believed I would spend the rest of my life with; it was the knowledge that my life had become passionless across the board.

I wanted to live a creative life, to sustain myself and my son via spiritual and creative expression. But I felt blocked at every turn and I could no longer hold in my grief and desolation.

I spent hours wandering from room to room in my silent house. Every now and then I would curl up on the floor and howl uncontrollably. Eventually, I couldn’t cry any longer and I wrapped myself in my duvet and put videos on autoplay, hoping to distract myself into numbness.

That’s when it happened. I was half-listening to a talk by the mathematician Edward Frenkel. I’d heard it before and enjoyed it, but this time something he said utterly gut-punched me.

“Do you leave your deaths on the battlefield of life, or do you have the strength and courage to give them your love and bring them back?”

And that was when I knew Edward Frenkel and I had something in common. We both knew something about dying.

Frenkel described a time in his life he had only recently begun to understand. It was a moment when he was sixteen and he was refused a place at university in Russia because of his Jewish heritage.

Despite going on to become wildly successful in his field, he spent years disconnected to the sixteen-year-old adolescent inside of him. To the pain of that moment when his dreams were crushed.

I’d spent years training as a contemporary dancer. I won scholarships and top roles in performances as well as competitions in choreography. I was young, talented, passionate, and obsessed.

One dance school called me more than others and I dreamed of finishing my training there. The day of the audition, on my seventeenth birthday, I traveled to that dance school, floating on a wave of excitement, nerves, and a sense of ‘rightness.’ Of knowing this was exactly where I needed to be.

The process was emotionally brutal. Only five people out of a cohort of over forty were called to the next stage after doing group classes and individual solos. The rest were told to go home, as they’d been unsuccessful.

I was one of the five. I waited in the corridor for my physical exam and interview. The instructor told us to relax, we’d passed the dance part of the audition and now it was just wrapping up the formalities. We talked about what it would be like in September when we started.

I went home and slept in a kind of peaceful joy, knowing my dreams were coming true.

Three days passed and the letter arrived. I began to tear it open, barely registering that it didn’t look quite right.

It wasn’t a thick envelope, stuffed full of information about course equipment and places to live; this envelope was small and thin. Inside was a letter that simply said they regretted to inform me I had been unsuccessful.

And that was the day a part of me died. She stayed dead for a very long time.

I wasn’t as strong as Edward Frenkel, who continued with Math. I know nothing about his home life, but mine at the time was awful.

Layers of trauma from a close relative’s mental health issues were taking their toll. I’d witnessed multiple suicide attempts and holding it together for my mother, who was struggling to cope, had torn into my psyche.

Dance had been my refuge from all that. The one thing that had never let me down. The one thing I trusted, believed in, and knew with everything I had I would do with my life.

The shock of the rejection floored me. I didn’t know what to do. I cried, once.

I wasn’t strong enough to pick myself up and audition again the next year. Instead, I ran away. I ran to an older, abusive boyfriend. I ran to university instead of dance school. I ran to drugs. I ran to self-harm that lasted right up until the day I became a mother.

That day almost twenty years later, as I listened to Edward Frenkel’s words I realized that at aged thirty-six I was still running. Part of me had died that day; the part of me that was filled with creative passion and obsession. The part of me that felt a spiritual flow and call so deep there were no words for it.

I’d spent years putting a band-aid on the pain. I busied myself with little creative projects, even danced a bit as a hobby. I’d told myself it was okay and I had to let her go. Let go of the passion I’d once felt, the sense of rightness and surety.

That day my head began spinning. Could I go back for her? For that girl I’d left dead on the battlefield of my life? How could I, after so many years of rejecting her?

I paced my room for a few more minutes and then slowly something shifted. I picked up the phone and I called a good friend. That night we drove to the beach.

I’ve always had an affinity for the sea. It’s where I feel the most alive and peaceful. The stars were out in the clear night sky and pools of water on the sand held the moon’s reflection. I walked alone to the water’s edge and quietly I began to talk to that girl.

She was angry. Hurt. I’d rejected her and denied her existence for so many years. But slowly, she began to listen.

There were a few moments of silence and then I felt her. She was inside me, still. And I realized that all those years I’d been trying to forget her, to ‘let go’ of her, to surrender her passions, when what I really needed to do was embrace her.

In order to let go of the pain, I had to accept it, allow it, and integrate it and my past self into who I was now.

Killing her had done nothing for me. It was only by having the strength and courage to give her my love and bring her back to me that I could stop letting the shattered dreams of the past rule my dreams in the present.

That night I slept properly for the first time in weeks and when I woke up I knew what to do.

For so many years I’d played at the edges of a creative career. I’d told myself it was “unrealistic” or I’d get round to it “one day.” But I was lying to myself.

The truth was I’d been so afraid to feel the rejection of my passion again that I sidelined every opportunity that came my way.

This is what happens when we cut ourselves off from our passions in an attempt to protect ourselves from pain. Because we’ve been hurt, we try to stay safe by remaining wherever feels comfortable, even if that comfort is actually preventing us from accessing potential joy. But without risking pain, we prevent ourselves from growing, and the irony is that by holding ourselves down to ensure we don’t fall we actually create far more pain in the long run.

When we go outside of our comfort zones and risk falling it opens up a whole new world of purpose, excitement, and engagement.

Realizing this was difficult but liberating.

A year after that morning I’d quit the job I hated and was making a living from writing, my other great creative passion. It wasn’t easy. Facing down every objection my mind could throw up about why I should just go back to what was familiar was challenging and sometimes exhausting. Sometimes it hurt like hell. To date, I’ve had my writing rejected more times than I can count.

But with each rejection, she’s there. I hold her close. I tell her I love her.

Together we dance. Then we begin again.

Emily Gregory worked for over a decade in mental health and brain injury support. She has a degree in West Asian Archaeology and combines research on ancient history with modern theories on spirituality and the mind. Emily believes that the best way to a fulfilling life is accepting your passions and discovering the courage to follow them.