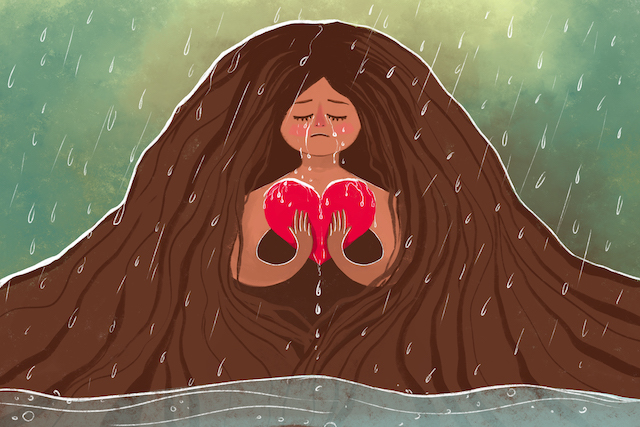 “I will not say: do not weep; for not all tears are an evil.” ~J.R.R. Tolkien, The Return of the King

Grief creeps up on you when you least expect it. It reminds you of the person you have lost when you’re out for coffee with friends, watching people hug their loved ones goodbye at the airport, and when you’re at home thinking about people you should call to check-in on.

Even when you think that enough time has passed for you to be over it, grief pulls at your heartstrings. You think about all the ways that life has changed, and your heart longs to have one last conversation with the person you have lost, one last hug, and one last shared memory.

A wise person once told me that when you love someone the hurt never really goes away. It grows as we do and changes over time becoming a little bit easier to live with each year.

Grief is not something we can run from. I know this now from trying to run, hoping I would never have to feel the pain I was carrying deep within my heart.

In November of 2020 I lost my godfather, a person I loved and cared for deeply. I also learned about my estranged father’s death when I googled his name. The reality that my estranged family had not had to decency to tell me of his death stung. I also lost people I had known and were connected to in my community.

The news of these deaths hit me with an initial shock—they did not seem real. For a day after discovering the news of each loss I found myself walking around in a blur, unable to eat or sleep. The next day I was able to force myself to function again. It was as if the people I had lost were not really gone.

When friends and family learned of the losses I had faced they reached out to me and offered support. I assured them that although I was sad, I was fine. Growing up in an unsupportive family I did not know how to accept their support, as it felt foreign to me. So, to avoid talking about my feelings and facing my pain, I turned the conversation back to them and asked about their work and/or their children. Slowly, people stopped asking how I was doing or how I was feeling because on the surface I seemed more than fine.

I was functional in my professional roles, writing articles, engaging in research, mentoring students, collaborating with colleagues, and making progress in my PhD program. I appeared like myself during online work and social events. I continued to support my friends and neighbors as if nothing had changed. Silently, I was fighting a battle that even I knew nothing about.

Each day I would force myself out of bed and tackle a lengthy to-do list comprised of personal and professional work and obligations. In the evenings I would force myself to work or engage in physical activity so that I did not have time to feel. In the initial darkest moments, I convinced myself that if I kept going, kept moving forward, I would not have to feel the pain I carried in my heart.

I became more productive than normal. I wrote more academic and non-academic articles, I volunteered and provided support to online communities, and I readily volunteered to edit colleagues’ work. In the few moments of downtime I gave myself each day I would either sit blankly staring at my computer or find myself crying. I couldn’t feel sad, I did not have time to feel sad, I needed to keep going I told myself.

The pandemic made it easier to live in denial about my losses and pain because normal rituals associated with death, like funeral services, had either been postponed or restricted to a select number of individuals. Perhaps if these rituals had been in place, I would have been forced to address my grief in a healthier manner.

I continued to run from my pain by adding accolades to my resume and taking on as many projects as I could find. Spring blurred into summer, and I found myself becoming irritated by the slightest annoyance. Sleepless nights and reoccurring nightmares became normal. I had less patience for my students, and I struggled to be there for the people who needed me.

I found my mind becoming slower, and by the end of June I was struggling to function. Yet, because I knew what was expected of me and did not want my friends or family to worry, I hid it.

As pandemic restrictions began to ease, and other people’s lives began to return to normal, I became painfully aware that my life could not. I saw my friends hugging their fathers in pictures on social media. Friends recounted seeing family for the first time in over a year and shared pictures of them hugging their loved ones. People in my life began to look forward to the future with a sense of hopeful anticipation. Work began to talk of resuming in-person activities.

I could no longer use the pandemic to hide from my grief, and I became paralyzed by it. I had to feel the pain. I had no choice. I couldn’t function, I couldn’t sleep, and I could barely feel anything except for the lump in my throat and the ominous weight in my chest.

My godfather, my biggest cheerleader and the person who made me feel safe, was gone. It felt as though anything I did or accomplished didn’t matter the same way anymore. I longed for conversations with him I would never be able to have. The passing of time made me aware of the changes that had taken place in my life and how much I had changed without him.

Throughout July I found myself crying constantly, but I was compassionate with myself. I no longer felt I had to propel myself forward with a sense of rigid productivity. Instead, I focused on slowing down and feeling everything. I asked work for extensions on projects, which I had previously felt ashamed to do. Other obligations I either postponed or cancelled.

I found myself questioning my own life’s purpose. Had I truly been focusing on the things that mattered? What mattered to me now that the people I cared about most were gone? How could I create a fulfilling life for myself?

There were days I didn’t get out of bed from the weight of my grief. Yet there were also days when I began to feel again—feelings of sadness, peace, joy, and even happiness that I had been repressing for months.

I allowed myself to cry when I needed to or excuse myself from a social event when I was feeling triggered. When feelings of longing washed over me, I accepted them and acknowledged that a part of me would always miss the people I had lost. Within the intense moments of pain and loss I found comfort in the happy memories, the conversations, and the life we had shared.

Slowly, the nightmares disappeared, and I began to sleep better again. Although I was sad, I also began to experience moments of happiness and feel hopeful again.

The grief I had tried so desperately to run from became a strange source of comfort. Grief reminded me that the people I had lost had loved me, and the fabric of their lives had intertwined with mine in order to allow me to be the person I am today.

The questions that plagued me, about what mattered to me, gradually evolved into answers that became action plans toward a more fulfilling life. In running toward grief and embracing it I made myself whole again and discovered a life I never would have otherwise known.

We instinctively want to avoid our grief because the pain can feel unbearable, but our grief is a sign we’ve loved and been loved, and a reminder to use the limited time we have to become all that we can be.

Jen Hinkkala is PhD student, researcher, and teacher of arts education in Canada. She strives to understand what factors and experiences lead to higher levels of wellness, resiliency, and self-care among arts educators and students. Jen is also a life coach and specializes in self-care, well-being, time management, performance anxiety, estrangement, overcoming abuse, career paths, and anxiety. Jen runs a support group for estranged adults and a group to support personal development. Follow her here: Twitter / Blog.