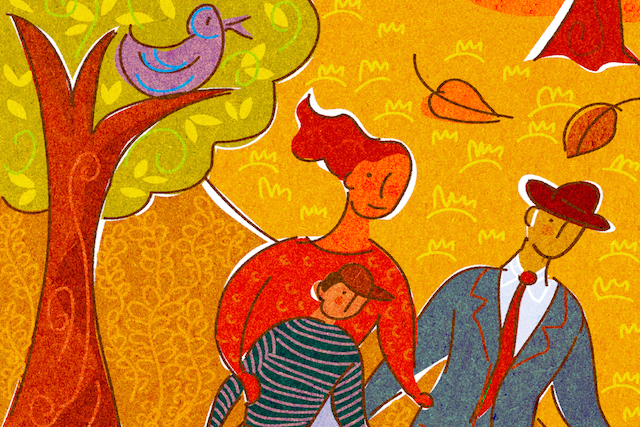 “It isn’t the mountains ahead to climb that wear you out; it’s the pebble in your shoe.” ~Muhammad Ali

I followed a little boy in Walmart today. He didn’t look like my son and yet I trailed him and his mother all over the store. I curled my fingers around the shopping cart so I wouldn’t be tempted to reach out and touch him.

He didn’t walk with Brendan’s bounce or jerk his head back, trying to slide his glasses back onto his nose. He didn’t have his sarcastic smile or those tiny freckles scattered across his cheeks.

But he had the same cowlick sprouting from the back of his head. I wheeled my cart around and followed this little boy who looked nothing like my son. I itched to brush this boy’s hair, just like I did before Brendan grew too old and wiggled away.

I used to smooth his spikes down and then laugh when they sprang back up, no matter how much gel I used. By the time he became a teenager, he gave up trying to tame them and left it messy and wild.

And now, I’ll never get a chance to touch his hair again. My son died in an accident a week before his first day of high school.

I followed this little boy through the aisles, zigzagging across the store. He spent a long time debating which Lego set to buy. I knew the perfect one, the Star Wars battleship, but I said nothing.

A few minutes later, he and his mother walked out of the store while I stood there, that hollow feeling gnawing me from the inside. I’d learned to steel myself when I saw Brendan’s friends at the high school or celebrated his cousin’s sixteenth birthday, but I didn’t expect something so small as a wisp of hair to make me stumble.

That boy’s hair was my pebble.

You’re never sure what tiny thing will make you stumble. A few months after Brendan died, my husband went to a funeral. It was for his friend’s grandmother, a sad passing, but not tragic like losing a fifteen year old son.

We both feared it would be too much for him. He prepared himself to see the coffin, to hear the sobs, to smell the roses and carnations in the room.

“None of that bothered me,” he told me later. “I was fine. But then I went into the bathroom.”

He stopped and shook his head. “I dried my hands on the air dryer and all I could see was that first time Brendan used one of them. I think he was four and he loved it. Again, he said, over and over. He kept washing his hands just so he could dry them again.”

It wasn’t the tears of the mourners or the wooden casket covered in flowers that made him break down. It was the memory of Brendan laughing while watching the skin on his hand bubble and dance. Michael had steeled himself against the mountain, but it was the pebble that brought him down.

A tiny pebble will forever make us stumble.

And yet, it’s that same pebble that fills us with the sound of Brendan’s laughter. There will be days when I follow a little boy and his hair, limping in pain. But there will also be days when I’ll smile, my fingers warm with the memory of smoothing down Brendan’s wild and messy hair.

Life is made up of these moments. Joy and heartache are woven into a tapestry of love. There are day when I want to pull on the threads of pain, but I know I risk unraveling it all.

After Brendan’s accident, icy shock seeped inside me and froze my memories. I couldn’t remember his favorite foods or the nickname he called our dog. I couldn’t even say what we’d had for dinner on our last night together.

But my daughter Lizzie remembered the special nachos he’d made after dinner that night. “He called them victory nachos,” she said and I smiled, picturing him slicing salami into perfect strips. He’d sprinkled them on top and dove into the pile, eating only one chip at a time.

And Zack remembered the way he and his brother would lie on their backs on the trampoline, waiting until the sky grew dark. They’d search for the first star to twinkle in the sky and then close their eyes and wish that pigs could fly.

We shared our memories in a notebook we left on the kitchen counter. The pages filled up, but not with big highlights like our vacation to Disney World. We wrote about the ordinary moments that are so easy to take for granted.

Like the marathon Monopoly games in our basement and how Brendan always tried to get Park Avenue, even if he bankrupted himself. And the hours Brendan and Michael spent sitting by the firepit they’d built out of bricks. Or the coupon he made me when he was fourteen, inviting me on a bookstore date.

I still have the slip of paper with his messy words scrawled on it, but what I cherish more is the memory of him hovering by my side, his eyes watching mine as I read his invitation. He’d seen me cry that morning and was desperate to make me smile again.

This is how love endures. We gather tiny moments and string them together, like beads in a never-ending necklace. And yet, it took the loss of my son to make me realize the little things in life are the ones that matter the most.

Our family life was a whirlwind of track meets and baseball practice and business meetings. In the chaos, it was far too easy to let those moments slip away. We carved out time for big vacations, but forgot to treasure the tickle fights late at night.

Don’t wait for a loss to make you realize what you’re missing right now. Push away the distractions that will always be there and hold onto your loved ones and the everyday memories you make together.

I still keep a notebook on my counter. I write down the piano song Zack played on my birthday or the way my daughter giggles when I touch her knee.

And I pick up pebbles on my walks. I slip them into my pocket, its gentle weight a reminder to cherish the smallest moments in life.

Linda Broder is a meditative musician who believes that joy and wonder can be found in the midst of unimaginable grief. After losing her teenage son, she discovered creative expression as a pathway to hope and healing. In her book, And Still the Bird Sings, Linda shares her story of hope, resilience, and everyday miracles. Sign up for her free 30 Days of Hope program at lindabroder.com/hope.

Honoring Lost Loved Ones: How I Carry My Son’s Memory into the Future