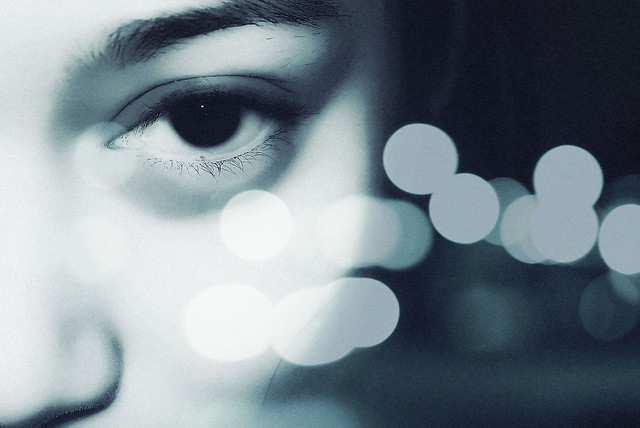 I lay huddled in a ball, my arms tightly around my knees, screaming at the top of my lungs. “Stop!” I wailed.

Earlier that night I was on my computer mindlessly clicking, with the usual soundtrack in the background, my mother and stepfather screaming at each other—until I heard a shattering smash. For minutes the house lay silent.

I crept out of my room, down the hallway to see my stepfather throwing my mother’s broken glasses back at her face. I saw the glass coffee table shattered.

“Go through to your room Toni!” my mother yelled. I refused and stubbornly watched.

My stepfather and mother continued to yell. Next the television hit the floor, and that’s when I found myself in the ball, screaming for it all to stop.

After that night we moved into a women’s shelter for the abused and homeless. In a haze of Valium, depression, and nightmares I watched women pass me by. Their children’s eyes spoke of horrors.

I spent the next five years of my life in a chaotic darkness within my head. I blamed myself for what had happened that night and despised what I was.

During that time, my mother and I flew to the other side of the planet and back many times over, chasing fleeting moments and running away from ourselves.

Eventually, my mother went back to my stepfather. Things quickly escalated and we again moved to another country, then to another state.

After that night, a huge resentment boiled inside of me, particularly for my stepfather. Still, I would go up to visit him every now and then after we moved back to Sydney.

These visits became poisonous for me, as I blamed him for everything—for moving me to Australia when I was seven, for the dark detours my life took seemingly because of him, and for what I felt and saw.

With every drop of alcohol that passed his lips, his smug face became more and more arrogant; his sickening grin was like nails to a chalkboard.

As years flew by I turned 17, moved out of our home, stopped talking to my mother, and cut everyone I knew off.

My stepfather was a constant presence inside my mind. I replayed the scenes over and over, drowning in tides of painful memories.

I felt deep down that my time with him was not over; there was unfinished business.

After turning 18, I made some peace with myself, my family, and where I was in terms of geography. A sense of direction and meaning slowly crept into my life. Yet, like a concrete wall, there lay the past and my stepfather.

The path of forgiveness was never going to be easy. Although I knew I needed to take that path, inside I was conflicted and confused.

One night, clicking mindlessly through Facebook, I saw a friend request from my stepfather. Sirens wailed in my head; was I ready for this? Over the next month we talked. In the daze of confusion I felt grief, compassion, and empathy.

He was a lost boy, a child inside, so badly hurt by life and other people that he felt comfort in unleashing on others. Were his actions right? No.

But understanding his pain and past helped me come to terms with mine.

Next month, on December 1, 2012 I will be 19. Unlike the previous years, when I spent the preceding months mourning what could have been, I feel comfort.

Slowly, I am making peace with my past and my stepfather; I forgive him for his actions and want for him nothing but happiness and fulfillment. The thought of his loneliness pains me, yet I feel it is through his loneliness and struggles he may manage to forgive himself and find peace with his past.

At times down the path of forgiveness, I heard a voice inside saying that I was letting him off easy, but a wiser one told me different. What good was to come of holding onto this ball of poisonous energy? It was a ticking time bomb waiting to explode within.

I now feel thankful for my stepfather’s influence and presence in my life. He has been one of my greatest teachers; he just doesn’t realize it.

That’s often the case with the people who’ve hurt us. When we can see what we’ve gained from having them in our lives, it’s so much easier to forgive.

From seeing the sunset across Europe and vast deserts blanket the Middle East, Toni-Yvonne has racked up impressive air miles and a love for airports. A blending pot of cultures and experiences, she writes about everything that crosses her mind at www.trancescript.wordpress.com, and her latest food blogging project www.unocappuccino.com.