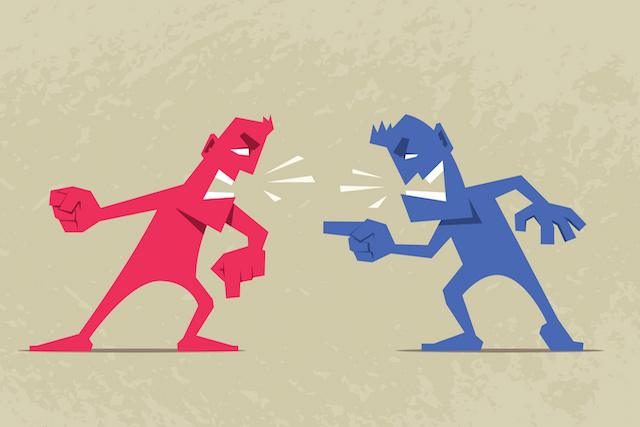 “Often those that criticize others reveal what he himself lacks.” ~Shannon L. Adler

I answer the phone.

And then the yelling starts. The woman on the other end lets fly a barrage of abuse.

She’s angry and upset and she’s taking it out on me. Because I haven’t sent her a text message for two days.

I don’t understand. I thought I was giving her space during a difficult time. I was also dealing with events in my own life.

I’ve known her for five years, during which time she’s shown herself to be a powerful ally, a fierce supporter, and a generous friend.

But her power has a flip side, as she’s also difficult and draining.

Forceful and forthright, she’s an expert in getting people to do her bidding.

This power had caused cracks in our friendship some time ago, and recently those cracks had become chasms.

I knew she had a string of broken friendships that had erupted dramatically when she perceived a slight.

And now it was my turn because I didn’t respond to her SMS.

Normally I hate conflict. I turn to jelly, stutter and stumble over my words, and feel guilty as all hell. I take on more blame than I should—say it’s all my fault. I just want the conflict to stop.

Actually, I want to run and hide until it all blows over.

But there’s no hiding from this call. No running away from this angry torrent of questions and blame.

And somehow I don’t turn to jelly this time. I find I have a strong inner core. A firm resolve that I can call on.

I’m not quite sure how, but I managed that conflict effectively. Even elegantly.

I didn’t necessarily manage it in the way that the other person wanted me to, but I managed it in such a way that I am proud of myself.

I managed to draw on all the conflict resolution skills I read about, but never used.

Here’s what I did.

One of the best things you can do to deflate a conflict is to empathize and agree with the other person, particularly if they’re really angry and emotional.

By agreeing with at least some aspect of their argument, they have nothing to fight about.

The goal isn’t just to placate them. You may find that by empathizing you recognize some truth in what they’re saying. When someone is emotional, it’s hard to recognize when they have valid points, but at times they do.

If you simply can’t see eye to eye, you don’t have to agree with their whole argument, just agree with something. You can start by saying, “You have every right to feel that way.”

What I said during that call was “I’m sorry you’re upset.” Because I was genuinely sorry that she was so distressed. Saying this allowed me to empathize with her, but not give away my own power or accept blame for the situation.

Remember Groundhog Day—when Bill Murray had to do the same thing over and over? Well, it’s often good to pretend it’s Groundhog Day when someone is angry.

You see, when someone is really emotional and upset or angry it’s a little like they’re drunk. Adrenaline is coursing through their body. This sets off a series of events that triggers the release of hormones.

In fact, some people use the term “adrenaline drunk” because when we’re in this state our ability to behave appropriately, listen to reason, and even control ourselves is vastly diminished.

That old expression “I’m so angry I can’t see straight” is fairly accurate.

So repeating your message is necessary. I kept repeating, “I’m sorry you’re upset, but I haven’t done anything wrong.”

If you keep your voice calm and soothing, it has a relaxing effect on both of you.

Nothing gets Eeyore riled or cranky. And he’s also empathetic, so channeling Eeyore can be really helpful when you’re caught in the crossfire of someone’s fury.

During this call I managed to distance myself and remain calm. I didn’t raise my voice or get emotional. Everything I said was spoken in low tones, and I forced myself to speak slowly.

It wasn’t easy, but I held it together until the end of the call. Using a soothing voice calmed me as much as it calmed her.

Get clear on who owns the problems or issues that come up. I know this is easier said than done, but doing this helps to separate the person from the problems.

It also allows you to work on solutions, and to be clear on your own attachment to both the problem and the solution.

If you can do this, you retain your personal power. This technique allows you to stay in control, and ensure that you don’t become involved in an emotional slanging match.

During this call I listened to what the real problems were. It turned out that my friend had a lot of unwritten rules for our relationship.

These were rules I didn’t know or understand, and rules she felt I’d disobeyed. She was upset that I’d violated these unspoken rules.

I also realized that I wasn’t interested in keeping a friendship that was so complex and difficult. For me, the cost of this relationship suddenly looked far too high.

Above all else, make sure you take care of yourself.

Sometimes you can’t reach a win-win solution, or even a win-lose solution. In my case, I had to agree to disagree because the underlying issues weren’t resolvable.

One of the ways I looked after myself was to know that I’d done everything in my control to resolve the situation in a reasonable way. I tried my hardest but we couldn’t make it work.

I was sad the friendship was over. But I was comfortable that I had stayed true to myself.

I also knew that I had taken part in the conversation as an equal party. I had made a conscious decision not to apologize or ask forgiveness.

I could easily have given in, accepted all the blame, and done whatever it took to patch things up. I could have let all her yelling and anger bully me into apologizing.

But I put myself first, and that made a huge difference. Normally I focus on the hurt that the other person is feeling. This time I focused on myself.

Here’s the key takeaway I have for you: Respect is everything.

Conflict is part of life, whether we like it or not. And the real key to any conflict is respect.

It’s important to show respect for the other person’s thoughts and feelings, and you can do that by agreeing with some part of their argument.

Because showing respect for other people’s thoughts and feelings is only half the story. Your feelings and thoughts are just as important as anyone else’s.

You deserve to be heard and understood too.

Your opinions and beliefs are valuable.

Your message is just as valid as anyone else’s.

You don’t have to shout from the rooftops. You just need to look after yourself.

So the next time you find yourself involved in a conflict, keep yourself calm by speaking calmly.

It’s there, just waiting for you.

Editor’s Note: This post has been expanded for clarification, and the title has been changed to better reflect the story and messages shared.

Cate Scolnik is on a mission to help parents stop yelling and create families that listen to each other. She does this while imperfectly parenting two boisterous girls of her own, and occasionally hanging out on Facebook. Download her free Cheat Sheet to Get Your Kids from "No" to "Yes" in Three Simple Steps and reduce your yelling today.