The Power of Literal Listening: Take the Stress Out of Communication
By Christine Marion-Jolicoeur 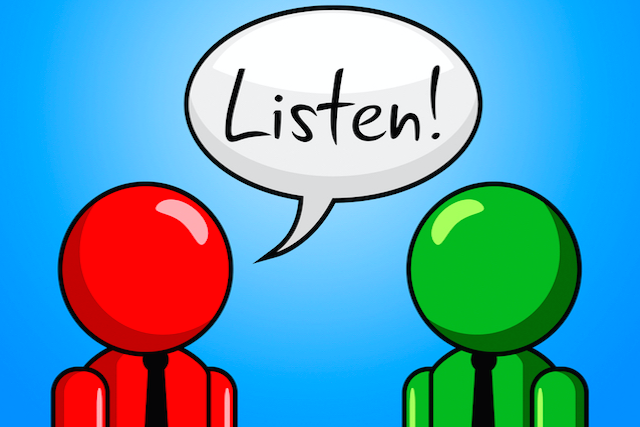 If I’m honest, I don’t think I listened to another person until I was in my thirties. I wasn’t really listening, not completely. It’s not that I’m super selfish or vain; I was just so busy doing the mental gymnastics that I thought I had to do to keep up in conversations that I missed what was actually being said to me.

I grew up in a family where it felt like nearly everything that was said had another, unspoken meaning. I remember feeling really confused as a child, not sure why the things that were said to other people were so different from what I’d heard in private and why what was said was not always what ultimately happened.

There was definitely an element of “do as I say and no as I do” in there, but it was more than that too. It was like there was a hint of secrecy underneath those conversations. Even though I couldn’t articulate it or understand it at the time, I certainly remember that I felt it, and that it had a big impact on me.

I often felt like there was something else that wasn’t being said, and that if I could just figure out what that something was, all the pieces would fit together and everything would finally make sense.

This created so much uncertainty for me: Why wasn’t I good enough and trustworthy enough to be told? Why did they think I wasn’t I strong enough to handle it? Why wasn’t I smart enough to figure this out?

In the end, I never could make all those pieces fit, even after years and years of trying. Now, looking back on those experiences and those messages I got while I was growing up, I can see what happened instead was that I developed some very unhealthy habits and beliefs about people and the world.

I learned to be hypersensitive to other people and their emotions, and perfectionism took over all areas of my life. I was just a kid, but I was trying so hard to read other people’s minds, interpret and analyze their words, and to prepare myself (mostly through endless worrying) for the other shoe to drop, so to speak.

Let’s skip a few of the messy middle bits where I failed miserably at perfectionism and mind reading (and I’m so grateful that I did!) Fast forward to me as a grown up, having kids of my own, to me loving them so fiercely and wanting to always be able to communicate with them, no matter what.

So I did what anyone in my situation would do—I searched desperately for someone to tell me what to do; I googled, I read self-help books, and did coaching and counselling. All that helped bit by bit, but it wasn’t quite enough.

It wasn’t quite the right fit for me and I needed to figure out a way to make it my own. Thankfully, kids start out as babies, so I had a bit of time to try out a bunch of different things and put my own unique spin on what I’d been learning about before my kids started having bigger, more complicated emotions and asking me Why? all the time.

I’ve done all kinds of self-development work around mindfulness, forgiveness, and gratitude, which has given me a new appreciation for my family, for those skills I learned in childhood, and for my own sensitivity. After all, they’re part of what makes me really good at helping people and at being an amazing parent, wife, and friend.

Even though I was able to change a lot of my old beliefs, the way I was communicating, and the way I was parenting my own kids, it still took me a really long time and a lot of practice to learn to trust that what people say is what they mean.

It turns out that this practice is an actual practice. It’s called “literal listening,” which may sound all fancy, but it’s really quite simple and you don’t need anything special to do it—just another person who is talking and some patience.

Basically, when you’re having a conversation, you focus on the actual words that the other person is saying and respond to them from a place of sincere belief that this is what they actually mean.

Definitely try this out with your partner, if you have one, and your kids! It might feel a bit strange or difficult at first, but it’s a much simpler way of relating to other people and it’s totally worth putting in the effort to learn.

Just listen. Listen to the words that are being said to you. And ask yourself, What is the literal meaning of these words? If I believed these words are true, how would I respond?

The caveat: People don’t always know how they feel, what they need, or what to say. Sometimes, for any number of reasons, they choose to be extra careful or extra vague with their words. And sometimes, no matter how sincere your efforts at literal listening are, there are other unspoken things going on underneath their words.

The truth is, listening and understanding will never be exact; language is messy and words are shaped by individual experiences. But it can get so much better, and this is the way!

So, if you find yourself stuck, or if you’re having trouble following the other person’s literal meaning, just ask. Ask for clarification, ask for more information, or ask them to repeat what they’ve said. The other person will be so happy you cared enough to ask, and then you can practice your literal listening skills on whatever they say next.

When I first started doing this with my husband and kids, I had to explain that I needed more concrete responses from them (it’s really hard to work with grunts, maybes, and I don’t knows!) and sometimes even ask them to explain things to me again, using different words.

I also have a few things I started saying to them over and over: I trust that what you say is what you mean (because I really do!), I don’t know anything you don’t tell me (because I really don’t and guessing gets us nowhere!) and I’m not upset, I just need more information from you (because asking for an explanation can sometimes leave the other person feeling like you’re trying to start an argument).

With practice, you’ll realize you no longer have to try to read between the lines, guess at the other person’s ulterior motives, or mind read. And that you can let go of trying to squeeze that one conversation or one sentence into the context of an entire relationship, let go of holding on to the past, and let go of all that judging, second guessing, and over analyzing.

There’s an extra added bonus too: You’ll also start to notice that you trust yourself more, because you’ll learn to say what you actually mean too. You’ll start to communicate more clearly and confidently, and other people will notice (and probably thank you for not expecting them to read your mind like everyone else does!)

Just think about how much time and mental energy you could save by using literal listening—not to mention how much more honest and trustworthy the other person will feel and how much more safe and certain you will feel.

Let’s be real here, I’m not saying literal listening is going to fix every communication problem you’ve ever had and that you’ll never be upset or disappointed by someone else again. You are, after all, a human being talking to other human beings and we’re all beautifully complicated and sometimes changeable.

What I’m saying is, we all have hundreds of little exchanges and conversations every day, so give literal listening a try. Try it today with the next person you talk to. You have nothing to lose, no one will ever know you’re doing it, and it will absolutely change your relationships for the better.

Are You Really Listening? 4 Ways to Understand and Connect with People