The Truth About Failure: How Hitting Hurdles Makes You Successful
By Nigel Cook 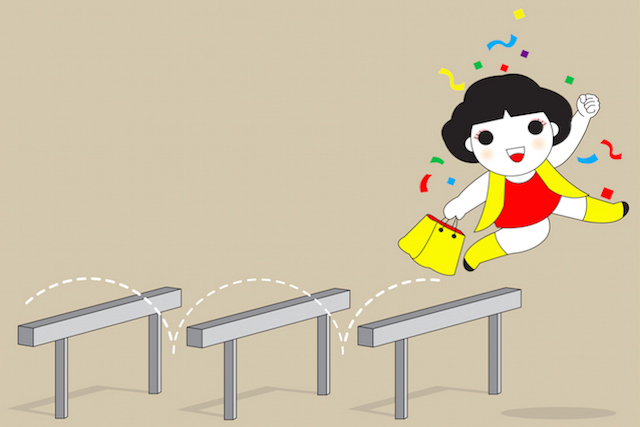 “There are no failures. Just experiences and your reactions to them.” ~Tom Krause

I had spent years training for this race. This was the big one. If I won and made the qualifying time, I would go on to compete in the Canadian National Track and Field Championships.

I was burning to win. Only the winner of this race would qualify. Second place wouldn’t cut it.

Competing at the national level could lead to all kinds of opportunities: sponsorship, athletic scholarships, and a career in athletics.

My favorite form of self-torture was the 110-meter hurdles. I lived and breathed sprinting and hurdles. Track and field was my life in my last year at high school. In fact, track was probably the only reason I even showed up at class.

I was good at it too. I had run the fastest time in my event that season and I was on target to win the Provincial Championships.

I trained four to five days a week on the track, plus I hit the gym two to three times a week. I was in peak form and ready to destroy my competition.

I was laser-focused on the day of the event in Vancouver, Canada, at the Provincial Track and Field Championships. In my races, I was usually the first one out of the blocks and this race was no different. I exploded out of the starting blocks and was the first one to reach the first hurdle.

The hurdles for my age category were thirty-nine inches tall (three inches lower than Olympic height), made of thick wood, and were weighted with a metal base. When you hit them, they resist and they don’t move much.

Best if you don’t hit them.

I felt powerful in this race. By the third hurdle, I was already taking the race. At no time was anyone in front of me.

Then, I started hitting hurdles. A lot of them. Each time you hit a hurdle, it dramatically slows you down.

Some hurdles I smashed into with my knee, while others I hooked with my foot. Painful every time.

And I didn’t just graze the hurdles. I really clobbered most of them. At times, it almost brought me to a complete stop.

I hit five hurdles that day. There are ten hurdles in total. It was the worst race I had that season.

Despite hitting so many hurdles, I still came in second place. I could have touched the winner with my arm, it was that close.

If I had run a clean race like I usually did, I would have shattered my previous fastest time. I would have easily run the fastest time that year in the province and I would have qualified for the Canadian National Track & Field Championships.

I was devastated after that race. All my training for nothing. I wasn’t going to get a chance to compete nationally. Game over. Done. I felt like all the life had drained out of me.

That was the last time I ever jumped over a hurdle.

I spent the rest of the summer partying and hanging out with friends. I became a bit directionless and I no longer had much interest in going to university (the only reason I was thinking about going was so that I could compete in athletics).

At the end of summer, I started working full-time in a supermarket and saved up cash. By spring of the following year, I was on a four-month trip around Europe with one of my best friends.

After that trip, the demands of life took over. I got stuck in low-paying jobs for a few years.

I had an unhealthy diet and I would sometimes get drunk on the weekends. I barely had time or energy to even go for a short jog once a week.

That race is still my biggest failure in life. Seems silly but there it is.

Over the years, I occasionally thought back to my track and field days.

The concept of failure is very pervasive in most modern cultures. It’s also responsible for a lot stress, poor health and well…basically crazy, unbalanced behavior.

In our culture, the attitude of “Second place is the first loser” is prevalent. You’re either a winner or you’re a loser. Not much in between.

We equate “winning” and success with achieving certain milestones such as having high salaries, being in a relationship, or having high-status roles in life. For many of us, not achieving these external successes means we’re failures.

Additionally, “mistakes” are often not tolerated at work or in relationships with people. There is usually a background, gnawing pressure to always say and do the right thing.

Failing can feel like an imminently dangerous threat that we must avoid at all costs, and cover it up when it does happen.

But it doesn’t have to be this way. If we just shift our focus, we can use failure to propel us towards our goals.

You Must Fail to Have Success

Quite often, when learning something new, we think that we have to nail it right off the bat. Who wants to look like a rookie, right? A clueless beginner?

Everyone wants to avoid mistakes and failure. But it is precisely through the path of making mistakes and “failing” that we learn.

You will hit hurdles in your life. You’ve been hitting them. What matters is what you do after you hit one.

In my case, I focused on my failure. I focused on hopelessness and I identified myself as being a failure just because I had a bad race.

I didn’t value coming in second. I ignored what was good and I was dismissive of anything positive that I had achieved.

I even gave up doing something I really loved doing.

You can see how dangerous having a “win or lose mindset” is, right? It shuts down our learning, closes off options and causes us to suffer emotionally.

We need to focus on our little successes, on what we did right and on how to keep learning and improving.

Let’s get comfortable with the idea that we’re going to make “mistakes” and that we might not always run perfect races.

If you take on the challenge of cultivating an improvement-oriented mindset, this will help you in all areas of your life.

You’ll become curious about your mistakes, observing yourself kind of like a scientist might: How can I do this better? What could I do differently so that I can avoid making that same mistake?

Winners and No More Losers

I still cringe sometimes when I say or do the “wrong” thing, but I usually catch myself and resolve to do something different the next time.

If I feel ashamed about making a mistake (or bombing big time), I try to move on as quickly as possible.

I recognize that my mind is my greatest ally; I’m the one who defines my own version of success, and I re-frame my experiences in a healthy, positive way, whenever I can.

Everyone deserves to “win” in life, and everyone is capable of reaching their goals in a way that is emotionally and physically healthy.

Can everyone really be a winner in life?

Yes, definitely…and you don’t need to come in first place or be the “best” to be a winner. When you love what you’re doing and when you’re focused on learning and making small improvements, anything is possible.

Nigel runs Holding Your Feet to the Fire where he helps clients reach their goals by providing them with step-by-step action plans, supportive accountability and solution-oriented feedback. Check out the blog for articles on how to achieve your goals, master your habits and take action. Be sure to grab a free copy of The Quick Guide to Reaching Your Goals Faster.

Get Started on Your Dream: Clear the 5 Most Daunting Hurdles

Life Is Not a Race: Why We’ll Never Find Happiness in the Future