Want to Change Your Life? Draw the “You” You Want to Be
By Elizabeth Ross Hubbell 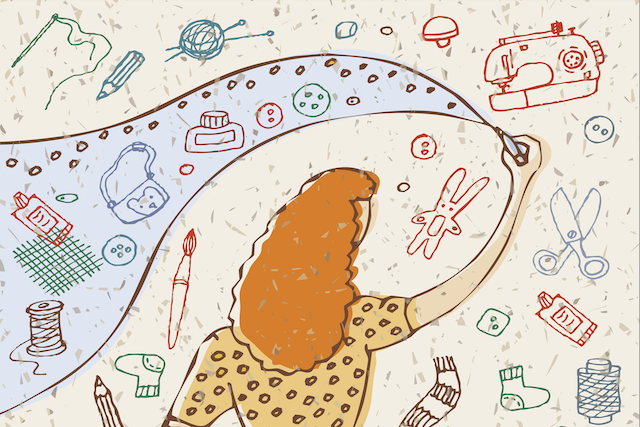 “You are not too old and it is not too late.” ~Unknown

In less than a month, I’ll be hitting a major “milestone” birthday. I quit my full-time job six months ago, ending a twenty-plus year career in education, and have spent time thinking about what I want the next chapter of my life to look like. I found myself thinking back to a drawing exercise I did a few years ago that has made such an impact on my being willing to make major changes in my life.

Entering my mid-forties, I had come to a point where something just felt “off.” I wasn’t sleeping well, often waking at 3am with anxiety about real or imagined catastrophes. I was often stressed and short-tempered. I was gaining weight and my health wasn’t in the top-notch condition the way it had always been. I felt directionless and unmotivated, but wasn’t sure what I would rather be doing.

I recalled a TED talk I had seen in which Patti Dobrowolski discussed the power of “drawing your future.” While the concept seemed a little silly to me at first, I decided to give it a go one evening while journaling.

The end result is a poorly drawn stick figure of myself in lotus position (which I can’t actually do) and a few notes in the margins. My goal was to draw and describe myself nine years in the future. What kind of “older woman” did I want to be? What were my activities? Had I conquered anything that currently plagued me?

The stick figure I drew has salt-and-pepper hair, as she no longer feels any need to waste her time and money trying to look younger. She instead proudly wears her silvers as a testament to her experience.

She is a vegetarian…maybe even vegan. She practices yoga and meditation daily…possibly is a yoga instructor. She rarely, if ever, drinks alcohol. She owns her own business, makes a six-figure salary, and has a healthy nest egg for retirement.

Most importantly, she is completely at peace with herself and her place in the world.

That fifty-five-year-old stick figure was so far removed from the forty-six-year-old me who drew her.

I was still spending exorbitant amounts of money every eight weeks coloring my hair. I was an omnivore though eating meat disgusted me more than I cared to admit. I practiced yoga every now and then, but not seriously, and I never meditated. While I never identified as an “alcoholic,” my drinking went far beyond the recommended single four-ounce glass of wine per day. I did not own my own business, but rather was in a job that wasn’t going anywhere.

Here’s what I found amazing. Within weeks of drawing that picture, I stopped eating meat. Within just a few months, I had cut out dairy and eggs as well. Six months later, I dyed my hair for the last time. I do at least a few sun salutations every morning. Most recently, I stopped drinking alcohol and said “good-bye” to that dead-end job.

The biggest change was the confidence to make all of these decisions and to realize there is a thrilling and fulfilling future awaiting me.

I still haven’t accomplished everything that stick figure has. My nest egg is growing, but I still have a way to go before I consider myself comfortably “financially independent.” I don’t yet own my own business, and I’m still working on trying to meditate more regularly. But having this vision of the future has helped me to set manageable goals about what’s important to me.

None of this has been done easily. It has required vast amounts of reading, educating myself, learning new recipes, and discovering that kombucha or a shrub in a fancy glass makes me just as happy (actually more so) than a glass of champagne.

I’m blown away by how inspiring that little stick figure has been and how the simple exercise of drawing my future helped me to get clarity about what I want out of life.

Research shows that the odds of anyone making a change in their life are nine to one. If you want to beat those odds, according to Dobrowolski, you need to see your ideal future, believe it’s possible, and then ask and train your brain to help you bring it to life.

That’s why a picture can be so powerful. When we draw, we utilize our creativity and imagination. This gets us away from our inner critic which often runs the show and tries to keep us safe from harm.

Once we have our picture, we’re able to close our eyes and connect the dots from the present to the future, factoring in all our life experiences and imagining the steps that would help us get from A to B.

If you’re struggling to picture your next steps in life, consider watching Dobrowolski’s video. She encourages you to first draw your current state—with complete honesty— and your desired new reality. Add color to the new vision to make it pop. Make it something that draws you in and gets you excited. Then outline steps to take that will make your new reality possible. You may be surprised at the clarity that transpires! Draw the “you” you want to be.

Elizabeth Ross Hubbell has served as an instructional designer, writer, teacher, and K12 consultant. She is co-editor of "Thriving as a Woman in Leadership in Higher Ed" (2021) and co-author of "Instructional Models: How to Choose One, How to Use One" (2019). She now does freelance writing on topics of health, nutrition, and fitness.