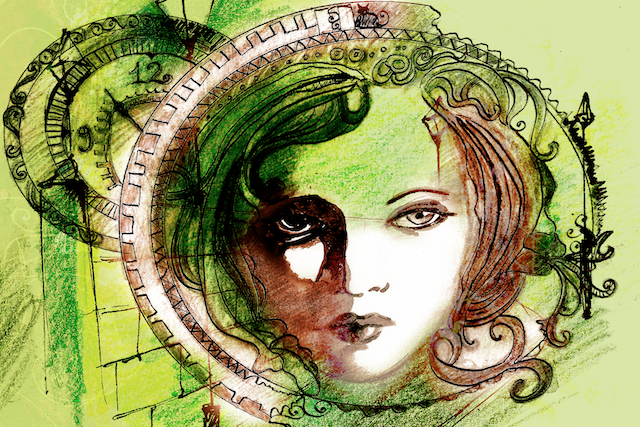 “I’ve come to trust not that events will always unfold exactly as I want, but that I will be fine either way. The challenges we face in life are always lessons that serve our soul’s growth.” ~ Marianne Williamson

At the age of nine, I was sitting in a doctor’s office at Baylor University with both of my parents when we were all told I wouldn’t live to see twenty-three. The doctor casually told us my dad would probably never get to walk me down the aisle and I’d likely never make my mom a grandmother, but there was great chicken pot pie in the cafeteria on the first floor.

Enjoy the rest of your day.

Eight months later, on my tenth birthday, the possibility of my dad walking me down the aisle was permanently taken away when he died suddenly of an aortic and thoracic aneurysm. He had the same genetic abnormality I have, which caused the aneurysm, so by my logic, confirmed by the doctors, my demise was not far behind.

I had no idea the day I turned ten, the day I lost my dad, my misguided and broken heart gifted me a license to be entitled and reckless until the day I died. Which, according to the medical community, wasn’t that far away.

Let me back the medical drama bus up back to the day in Texas at the hospital just for a quick, minor detail to note.

That day my dad and I were simultaneously diagnosed with a genetic disorder called Marfan Syndrome.

In a very tiny nutshell, it’s a connective tissue disorder found on the fibrillin one gene. It essentially weakens all connective tissue in the body. The result is a body whose heart, lungs, eyes, and spine are severely impacted. A prominent and common feature with this condition is “abnormal” height. People affected are relatively tall (I’m 6’2”, my dad was 6’9”).

For precautionary purposes, we both stopped participating in any activities that raise the heartbeat, to decrease the risk of having an aneurysm or potentially causing damage to the face due to dislocation of the lens in the eye.

No contact sports, no exercising, no gym at school. I was basically told I could walk, bowl, or golf. I hated sports anyway, so I was excited to not have to dress for gym.

This consequently led to a lifetime of comments like “You don’t play basketball or volleyball?! That’s a shame!” or “Omg, you’re so tall!” As if I wasn’t already painfully aware, but I digress…

Point being, I was told from a very young age on a fairly regular basis, “You can’t.” So I learned to habitually answer, “I can’t” every time someone asked me to do pretty much anything.

What possible negative effects could this have?

I couldn’t see it at the time, but this led to a lifetime of constantly assessing every situation based on whether it was going to speed up my untimely death or not.

I didn’t learn how to question whether or not I liked things but whether or not it was something that was going to kill me sooner or later. In turn, I missed a million opportunities to get to know who I was as a young woman.

All I knew and all I was told were all the things I couldn’t do all the time.

This short-term life span turned my life into a short-term life plan. Soon enough the emotional pains of being a teenager and the new kid in high school, along with unresolved daddy issues, kicked into high gear, and I had no idea how to deal with any of it.

The rest of high school and most of college was a blur. I got married at twenty-three because, well, time was running out for me. And then, when I was twenty-four, doctors told me my life expectancy had suddenly increased to forty.

(If there’s one emoji to express how I felt it would be the face with the wide eyes and red cheeks that looks like he would say “Oh sh*t!” if he could talk.)

I panicked and started trying to speed up the clock. Living wasn’t for me. I wasn’t raised to live; I was raised to die. Live all the places, have a baby, buy the stuff, laugh all the laughs, and then die.

This is where my excessive drinking turned into full-blown alcoholism and prescription drug addiction.

I was either going to OD or make my heart explode, but I wasn’t going to stick around. I must note that none of this was planned, intentional, or a suicide mission. In my mind at the time, I literally didn’t know what else to do, not even how to ask for help.

So, someone asked for help for me. Rehab is a whole other blog.

When one of my coaches asks me to journal about how I want my life to look in five years or where I want my business to be long term, I still don’t know how to answer that.

I don’t understand long term. And for the longest time, I always thought that to be a nightmarish curse. Until now.

My inability to see life long-term seems to be all the rage these days. There’s Eckhart Tolle, Wayne Dyer, and Deepak Chopra all preaching about being present, being here now, and being there with the spirit of love, and I’m over here wondering how long the two-week wait to hear if this gets published is going to feel or if I’ll be around to see it go live.

When you think about it, we’re all terminal. No one gets out of here alive. Yet we all run around like we’re going to cheat death.

We run out of joy staying married to jobs, people, and places we are no longer passionate about. We’ve forgotten how to be happy because we’ve made it so elusive.

In designing my life by listening to my heart, I discovered a few things along the way.

I learned that we habitually state we are human beings, but we spend too much time doing. We get stuck in the how and what next instead of being right where our feet are in that moment. I learned to create space and presence for life to happen organically instead of allowing my mind to race with perceived fears.

I’ve learned to take the time to figure out what the voice of my heart sounds like instead of the blazing of doubt in my mind. This finally allowed me to see what felt light and right in my life and allowed everything that feels heavy to fall to the way side.

This journey was started by a seed that was planted three decades ago. The seed called “I can’t” grew into a self-fulfilling prophecy filled with destruction, heartbreak, sorrow, and the urge to run from everything.

When I stopped running (drinking, using, blaming, complaining) and learned to be still with myself and all that had encompassed my life, an entirely new life was born.

In designing my life and healing my soul, I have found that happiness can be found in big moments like reuniting with my soulmate, winning a competition, or leaping into a new career. It can also be found in the smaller moments like watching my child choose a book instead of watching television, receiving flowers just because, or just being grateful for the sunshine.

But I have found I am the happiest and most content when I am meditating, creating a safe space for others, and playing. Playing like a child on a daily basis is where it’s at. Whether I’m writing, coaching, baking, or gluing rhinestones on anything I can get my hands on, that’s where I’m at complete peace.

And that (happiness) seems to be the individual goal of most people I meet, but it doesn’t seem to translate into the collective thinking. That’s where I’ve found the hiccup. The getting tied up in what we see everyone else doing, where everyone else is succeeding, and then wondering why we don’t have that perfect slice of peace pie that everyone else seems to have.

The hardest thing I’ve learned is there is no special sauce, no magical happiness-to-sadness ratio, and no one-size-fits-all solution. We each have to define happiness for ourselves.

For me, this means doing the work. It looks like me getting brutally honest with my past, mending my mistakes, giving love to every person I meet, and telling those who are close to me what’s really going on every day.

This connects me to you and you to me, and this is ultimately the biggest lesson I learned.

We all want to be seen. We all want to be heard. We all want permission to be ourselves. I’ve experienced what that feels like, and now I’m living a life that I was told would never happen. I stopped believing other people’s opinions of me, my life, and where they think it should be when I realized those opinions and thoughts are about what’s missing from their life, not mine.

There is no slice of peace pie waiting for you or for me. We each have our own pie to flavor, bake, and share. I guess that would be called Purpose Pie. I sit in gratitude every day I have found my pie and am able to share with all who are hungry.

All of this because they told me I was going to die and the hospital chicken pot pie was nice.

Lindsay is a life and mentor coach walking clients through emotional recovery and into self-discovery from significant emotional events including death of a parent, rape, addiction, medical challenges, infertility, and divorce. Lindsay is a single mother to an eight-year-old superhero in Nashville, TN and is on a mission to get rid of the phrase “good enough.” Visit her at lindsaywilsoncoaching.com.

How to Rise Above Difficult Circumstances and Be Happy

You Never Know What Someone Is Going Through, So Be Kind