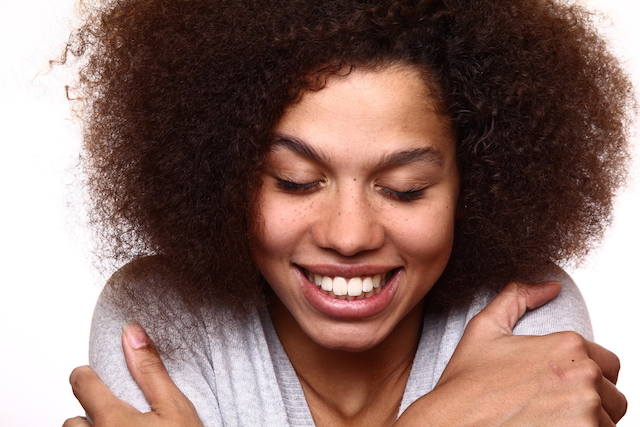 “Love yourself first and everything else falls into line. You really have to love yourself to get anything done in this world.” ~Lucille Ball

A few weeks ago I was at a party, and the discussion at one point turned to fitness.

I ventured the opinion that lifting weights was a vital activity for anyone who wants to take care of their health, to which a badly overweight man I didn’t know angrily replied, “Hell no! Lifting weights is just for shallow, insecure bros who can’t feel good about themselves unless they look buff.”

He added, “I don’t work out, because I love myself for who I am and have nothing to prove!” He looked at me quite pointedly as he said this last part. The irony, as you might imagine, was lost on him.

The thing is, I used to be like him. Until my early twenties, I was extremely thin and a chronic under-eater, which can be just as bad as being obese.

I looked like a starving refugee, was frequently sick, and always low on energy. I steadfastly refused to lift weights, eat more than I wanted to, or really do anything to get into shape, on the grounds that being confident and authentic about my own identity required me to refuse to change.

I tried to convince myself that I was really happy.

My attitude changed when I started meeting people who were really into fitness—people who played sports, lifted weights, and had given up fast food and donuts in the pursuit of better health.

What struck me about them was their obvious positivity; they loved themselves and they loved their lives, even as they pursued goals that would dramatically reshape their bodies. That, in turn, inspired me to start taking fitness seriously, and to do so from a place of self-respect and confidence.

The body-positive movement had presented me with a false dichotomy: that either you love yourself and feel no desire to change, or you hate yourself and that motivates you to want to become better.

What I realized was that this wasn’t how successful change works. The people who succeed in any kind of self-improvement, much like my new acquaintance, love themselves right from the start.

Shortly after I started seriously dieting and exercising, I realized that I had made the same mistake in other areas of my life. I wasn’t taking school seriously because I had always been a slacker, and figured I just had to accept that about myself. I was shy and awkward, but I refused to improve my social skills because that’s just who I am, man.

Imagine how you would react if your son or daughter got an F in math class. You wouldn’t mock them for their failure, but neither would you just accept that they’ll never be good at math. Instead, you would sternly push them to do better, and offer to tutor them, and you would do it because you love them and you want only the best for them.

Treat yourself the way you would treat your own child: push yourself to be the best you can, because you love yourself and believe you deserve a great life.

Books and movies tend to all follow the same narrative: protagonist is unhappy, then succeeds at everything, and then lives happily ever after. And yet, if you’ve read the autobiographies of highly successful people, you can see that while they often started out unhappy, they became happy long before they “made it.”

Arnold Schwarzenegger was ecstatic when he won competitions, and he chastised himself when he didn’t meet his own standards. And yet, he was one of the happiest people on Earth from the day he started bodybuilding, long before he was a champion.

We need to always have goals. Once we meet the goals we have, we need to set new ones. And that means we can’t withhold happiness from ourselves as a way of motivating ourselves towards those goals.

Happiness and self-love are not rewards for completing our goals. They are necessary foundations for pursuing our goals.

So remember: love yourself, and choose to be happy. Set high goals for yourself, in all areas of life. Pursue those goals, because you love yourself and believe you deserve an amazing life.

Woman hugging herself image via Shutterstock

John Fawkes was told he would have been voted “most changed” at his high school reunion if he hadn’t shown up late. He is a fitness expert who writes about healthy habits, sleep, body hacks, and conquering psychological barriers at JohnFawkes.com.