What Would Your Future Look Like If You Took a Leap of Faith?
By Victoria Cox 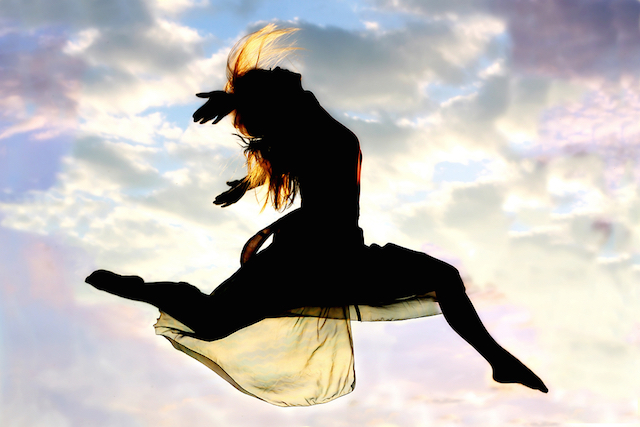 “In the end, we only regret the chances we didn’t take, relationships we were afraid to have, and the decisions we waited too long to make. ” ~Unknown

Have you ever thought about making a big change in your life?

Chances are, just that very idea produces a mild sense of anxiety and discomfort. But what if you were to actually go ahead and make that change? What would that look like, what would that feel like?

A rhetorical question, I realize. You only know if you go through with it. If you don’t, you will never know. It’s a really tough place to be—one that I have been grappling with for many months.

Recently I took my own leap of faith and resigned from my job of almost ten years. This was a long time coming; I invested much time and energy on what would be the ideal outcome and when I should take action.

Wracked with indecision, I thought through every aspect of my decision, and then mulled it over some more.

One thing that I learned from this approach is that intellect can be a useful and logical tool to work through certain issues, but it’s also very easy to over think a problem into oblivion.

Granted, while it’s possible to think a problem through to its logical end, this approach leaves you with a bigger problem. How can you be sure?

The term leap of faith proves to be an apt metaphor. There are no guarantees in life. X doesn’t always equal Y.

You choose to take the leap despite the uncertainty. That’s the trick.

It’s a brave move but so often in life, our life rewards increase exponentially with the risks that we choose to take. In taking the leap, you are making a very bold statement to the Universe. You are effectively saying, “I trust in you.”

While I was mulling, tweaking, and generally controlling every aspect of making this decision, the Universe had other ideas in store for me.

The work stress, which was previously tolerable, was turned up several degrees to a rolling boil.

Business colleagues who I previously had easy working relationships with were replaced with aggressive Wall St. Finance Guy. Time passed, stress levels rocketed skyward, tempers frayed. Something had to give. That something was me.

Knowing it would take an Indiana Jones boulder rolling toward me before I actually quit my job, the Universe finally got its message across. I was the proverbial frog, boiling away in a pot of my own making.

My work environment was so toxic it was starting to make me physically ill. Sunday nights were a hotbed of anxiety-driven insomnia, while the Monday morning elevator ride was akin to riding to the top of a rollercoaster, excruciatingly slowly.

Finally, I took control of the situation, and under the influence of a heady cocktail of anxiety with a splash of dry mouth, I handed in my notice.

I had imagined this moment for quite some time. I fantasized about the sense of euphoria I would feel in the aftermath.

In my deluded version of events, the soundtrack from Rocky would begin to pump out of invisible speakers as I made a couple of victory laps around the office, hands raised aloft.

Alas, the only thing that was raised aloft was my blood pressure.

The euphoria that I had imagined went MIA and its evil stepbrother, Fear, came strolling gleefully into its place. I certainly wasn’t expecting that.

What people don’t tell you about making these types of decisions is that there will be a period, usually immediately afterward, whereupon you stop and ask yourself, “What the F did I just do?”

When recollecting these typically momentous times in our lives, people tend to skip over this part of the story. Time passes, things work out, and so the focus leans on the following premise: I took a leap; it was scary but in hindsight it was the best thing I ever did.

Let’s focus on that scary bit for a second. I’m not advocating not following through with your dreams, but I feel that its important to know that there will be a period of time where a torrent of emotion pours forth. Good, bad, or indifferent.

In my experience, the post-leap process ranged wildly from the spectrum of buttock clenching anxiety through to “Sorry I didn’t mean that; can I take it back?”

When you make and follow through with a huge decision, know that you are effectively taking that little comfort zone you painstakingly created for yourself and burning it to the ground. Expect to feel uncomfortable and probably a little vulnerable.

I made the mistake of believing that the absence of this euphoric feeling was because I had made the wrong decision. I didn’t. It’s totally normal to spend this time with your old friends, Regret, Worry, and Anxiety.

They’ll come over for coffee, stay for dinner, and probably spend the night. Remember, they are just paying a visit to check in and ask you again, and probably again over your morning coffee, “Are you sure you made the right decision?”

What helped me get through this difficult time was a combination of self-care, talking with positive-minded friends, and most importantly, imagining what my life would look like if I didn’t go ahead with my decision.

I recently heard about the “Rule of Ten,” which I found very useful when faced with a big decision.

It’s been a while since I took the leap. My emotional houseguests have finally left, and today was the first day where I woke up and felt something. Was that Hope I heard ferreting around at the bottom of the bed? Oh and look, Excitement is knocking at the door.

Making a change can produce some of life’s most rewarding moment. This doesn’t necessarily have to be experienced through a dramatic gesture such as quitting your job. A small life tweak such as breaking a bad habit can oftentimes be equally as rewarding.

Changing what no longer works for us, whatever that might be, is an act of bravery. To stand up for oneself and say “I don’t want to do this anymore” shows us that we are capable of doing more and being more.

But it’s also important to know that there will be growing pains. After all, if it were easy for people to change up their lives, the whole population would be in constant flux.

Yet, ultimately change really is the only constant in life. It’s how we adapt to it that matters.

So, when you find yourself on the precipice of a cliff, teetering on the edge of a big decision, ask yourself what your life would look like if you made a change, and if you didn’t. This just might help you follow your heart and take your own leap of faith.

Victoria Cox currently resides in NYC. She has written for The Conversation, Tiny Buddha, Elephant Journal, The Lady Project, Dumb Little Man & LifeHack. You can connect with her on Instagram @vcox23.

Having Faith: Why Do We Expect the Worst in Tomorrow?

Believing in Our Goodness: Do You Have Faith in Humanity?