Calmness Is Contagious, Even If You’re Faking It
By Jeff Urmston 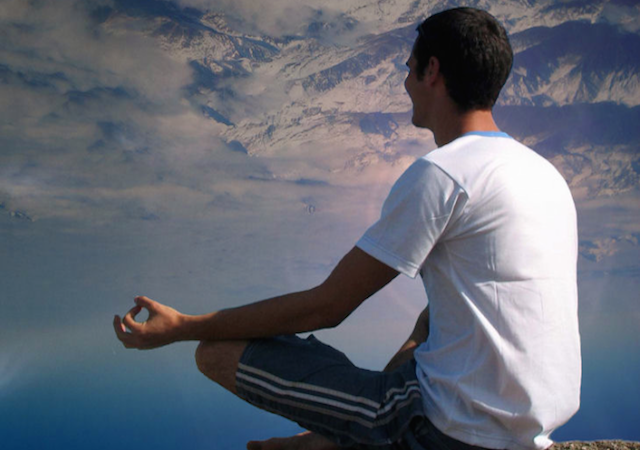 “Peace of mind is not the absence of conflict from life, but the ability to cope with it.” ~Unknown

We had just reached cruising altitude, and my friend and I were settling in for the eight-hour flight from Tokyo to Honolulu. Exhausted after spending the day in the airport, we were excited to finally be in the air with beaches awaiting us at our destination.

Jered and I were on an adventure around the world flying with standby tickets to any destination that had open seats. Even though we had been trying to get a seat to Bangkok, then Sydney, then Seoul, then Frankfurt, and then Paris, all with no luck, we decided to take the only available seats on the last plane of the day.

After getting comfortable we decided to pass the time by racing each other in solving our Rubik’s cubes (what can I say; this is what we did for fun). It turns out this odd hobby was about to help me on the road to improving my inner calmness.

“BANG!” We hit sudden, unexpected turbulence from a winter storm. I only remember two things: my stomach squishing into my throat as we hit an air pocket and a little girl in the aisle flying to the ceiling.

Thankfully, there was a nearby flight attendant who heroically jumped, caught the girl, and curled up on the floor before she got hurt.

The plane was jerking violently in all directions. People were screaming. The pilot was on the intercom saying something, but no one could hear it over the chaos.

Throughout the maelstrom my friend and I stayed focused on our cubes, continuing to spin their sides as we attempted to solve them before the other could. While my exterior seemed calm and focused, in my mind I was screaming.

My hands were clammy and it became harder to keep my hold on the plastic toy in my hands. I was afraid I was going to die.

The worst of it was over in twenty or so minutes, but the flight was still rough for several hours. As the sun started to rise and the flight had been calm for a couple hours, passengers slowly started to liven up again, chatting with the people around them about the experience.

Having spent the time focused on the cube in front of me, I was surprised when the guy sitting next to me said, “Man, I was freaking out. I was about to lose it, but then I looked over and saw you two just playing with those things. You two were so calm that it helped me calm down too.”

This struck me as odd since I felt the same way he did, just internally. But soon other passengers sitting around us around us started chiming in, sharing the same experience. It seems a wave of collective calm slowly rolled over the back of the plane helping to ease some of the tension.

Without being aware of it, I projected calmness to the people around me. They in turn became calmer. And ultimately my internal fear started to fade away as well.

It was a surreal experience, but it became clear to me that calmness was contagious, even if I was only faking it.

In many meditative traditions a calm, clear mind is often said to be like a still pond under a full moon. The smooth surface is transparent, allowing the moonlight to clearly illuminate the bottom of the pond. It is also like a mirror, reflecting back in perfect detail the moon and the night sky.

Unfortunately, however, our minds are not always clear. The surface is full of ripples that make it hard to see the bottom and distort the image of the moon. While these ripples are sometimes created by the wind or the environment, most of them are caused by rocks dropped into the pond; rocks created in our minds.

These rocks are emotions like anger, hatred, or fear. Often without realizing it we are constantly throwing these stones into our ponds, never letting it return to stillness.

Returning to a calm mind is simple. Just stop throwing rocks and let the waves calm down on their own. Despite this, we often try to calm our minds by throwing more rocks into to pond.

Sometimes when I can tell my wife is upset with me, but tells me nothing is wrong, I start to provoke her, “What’s wrong? I know something is wrong! Why won’t you tell me what’s wrong!?”

I genuinely want to calm things down but, as you can imagine, I end up making her feel worse because I continue to throw rocks instead of letting things calm down on their own.

When we do stop throwing rocks, though, the effect can be powerful and lasting. As we are interconnected with others, the stillness of our mind, the refusal to throw rocks, can help others find the same peace.

When people see that your mind is clear it helps them realize that they too can let go.

I still think about that flight from time to time, but mostly when I’m flying. I used to be a fearless flyer, but even today I feel pangs of panic, that squirt of adrenaline down the back of my neck, every time a plane bumps or shakes.

However, as I’ve increased my awareness of my own emotions, I can sense when I’m holding a rock and then I set it down.

Here’s an exercise to try. Next time there’s something or someone causing you distress: stop talking. Pause and take a moment to take a few deep breaths. Begin to watch your thoughts and note the upsetting ones. Don’t ignore them, just notice them. These are your rocks.

As you notice anger or hatred forming in your mind, imagine it as a rock. See yourself holding that rock, poised to toss it into your mind. But instead of throwing it, picture yourself gently setting it down beside you. Take a deep breath. Let it go.

Practice this when you can. Not only does cultivating calmness have tremendous effects on your personal state of mind, you never know how big an effect you may have on the others around you.

Jeff is a designer, philosopher, and blogger that writes about growing your mind through meditation, mindfulness, and helping others.  You can connect with Jeff on Twitter via @jeffurmston or on at www.livegrowchange.com.

The Secret to Replacing Agitation with Calmness

Accepting Things for What They Are Instead of Resisting Change

Are You Stressed, Rushed, and Aggravated?