When We Hold onto Relationships That Hurt Us
By Evie Drake 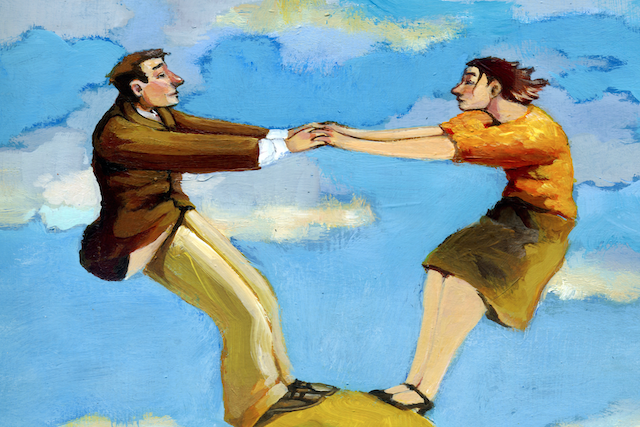 “Relationships are like glass. Sometimes it’s better to leave them broken than hurt yourself trying to put it back together.” ~Unknown

Human beings are genetically programmed to desire love. Embraces are as important to us as food and water.

Perhaps that’s why when we find someone—the wrong someone—we’re often too blind to see it.

We feel it and yet we hide it away, write it off as an odd case of commitment phobia or just a hiccup in our new relationship, oblivious to the fact that were heading into a future of sleepless nights, constant worrying, and consistent phone checking.

Even when every hidden fiber within us tells us to walk away, we stay.

I recently experienced something similar. We first met back in high school, different people from completely different worlds. He was the guy that had all the friends; I was shy and quiet.

Fast forward five years and we meet again. This time he’s in pre-law and I’m a writer trying to figure out her calling.

We meet for drinks, coffee, a movie here and there, and before you know it we’re walking hand in hand. I’ve met his friends, his parents, even his grandparents. To someone on the outside, this looks like something every healthy couple would do, except we weren’t healthy—far from it.

He always had his phone, and yet my texts remained unanswered. He only wanted to hang out on occasional evenings, routinely made plans without following through on them, was never where he said he was, yet still referred to me as his girlfriend when we met someone he knew.

He was a guy that sucked at communicating, and I was the girl that needed it.

He was physical, I emotional. He wanted convenience; I wanted something that swept me off my feet.

It was a relationship doomed from the start; I was just too stubborn to see it.

I would find myself constantly asking for advice, yet always heard the same thing over and over. Get out of there. Leave. My excuses remained the same. He works all day. He’s busy. I just wasn’t ready to admit the truth to myself. Ignorance at its finest.

Even when I had the courage to bring up the things that bothered me, somehow he’d challenge all my worries. “I’m just not a texter,” he’d say. “I prefer conversations face to face.” Of course, there’s nothing wrong with that response. It was the dishonesty I felt behind it.

I didn’t feel like I was in a relationship, yet he’d confirm that we were. He seemed to know exactly what to say to get me to stay.

I couldn’t see that I was the only one putting in the effort. I made sure I was always there for him when he needed me, listened to him, even surprised him at work with coffee, putting myself out there, hoping that he would one day reciprocate.

He only talked about himself during our conversations, and when it came time for me to share, he seemed distant and uninterested in what came out of my mouth.

He was bound to a different city in the fall, and with his lack of communicating there was a deep nagging feeling that it was only a short time before I had my heart broken again.

I had wanted a relationship to work out so bad that I had chosen to ignore all the warning signs that this one wasn’t right.

Even when he left for a month and I suspected he’d cheat on me, I still stayed. Why? I could only draw one conclusion: I had been treated like that so many times before, I expected it. And I believed it was all I had to look forward to.

Though I tried to explain to myself that I deserved so much better, I wasn’t willing to hear it.

But one day I surprised myself. I became more independent. I began to pull away from him. His texts would go unanswered for hours; my obedience to go to him whenever he called began to wane.

I stopped initiating conversations and instead sat back and began to enjoy all the things I had ignored. I made a list of things I had always wanted to do and did them. It kept my mind off things and opened my eyes to the truth.

As the time passed, I would like to think, he became the one that needed me; he had just realized it too late.

I questioned whether or not he had treated me that way because he knew I would always be there for him; then, when I no longer was, he wanted that same caring person back. Had I been nothing but a convenience for him the entire time? I couldn’t wrap my head around it.

When it came time for me to explain, my answer was simple: My gut knew it wasn’t going to work from day one, but falling head over heels for him at first, I chose to ignore it.

I guess I just wanted so badly for things to work out I didn’t bother to think about how unhappy I was; I chose to mask all hurt with a small smile and laughter.

Life can be confusing and cruel sometimes, but a fantasy can’t hide the truth, no matter how badly you want it to.

No one deserves to be pushed to sidelines, to feel like second best. If there’s something telling you to stay away, if even the smallest of your radars begin to go off, walk away.

Leave knowing that you dodged a barrage of emotional bullets instead of realizing you had to fight to keep your head afloat to keep from drowning.

If someone wants to be in your life, you shouldn’t have to change anything about yourself to keep them.

If they are willing to get to know you, they will. Period. All the wrong people may step into your life, and each one will no doubt leave their own emotional scars, but when the right one comes? You’ll know. You’ll feel it.

I was lucky enough to have a best friend who stuck by me even when I chose to ignore all her warnings. When I finally realized my mistake, she simply smiled and asked if I wanted to watch the newest horror movie.

Friends like that are so important to have in your life. Coming from a hopeless romantic who prefers books and writing to real people, this was hard to admit.

I can only say that when another man comes around I’ll be taking it slow.

For all the friends out there, even if you don’t agree, just be with them for every upsetting phone call and annoyed text. Your non-judgmental support might just be the reason they realize they could have something better.

We all need to learn for ourselves in order to truly grow. Even as much as we would like to save someone from the heartache they will no doubt experience, we need to take a step back, wait, and console them when they need it.

To the boys and or girls reading, realize what you have while you have it, because there’s nothing worse than finding out when it’s too late.