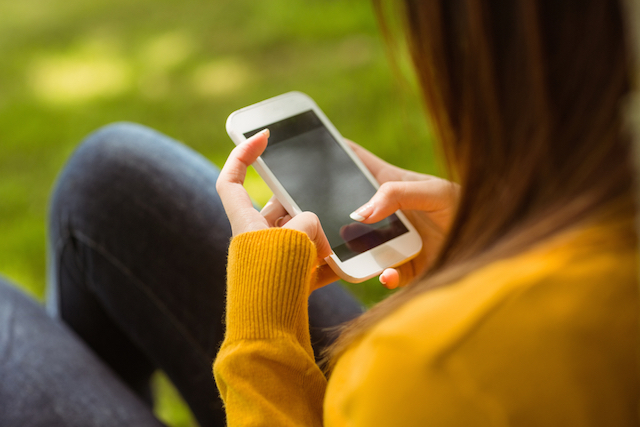 “If it is important to you, you will find a way. If not, you’ll find an excuse.” ~Unknown

How many times have you made plans with friends, only to receive the dreaded, “Sorry, need to reschedule” text just minutes before you were meant to meet?

Is it any wonder that you get tired of trying, that you struggle to feel secure in relationships?

But before we get carried away castigating others, let’s take a look at ourselves. We hate it when other people bail at the last minute, but do we do it too?

As humans, we have an astonishing capacity for denial. People I love and respect tell me how much they despise it when other people text and drive. Then five minutes later, what are they doing? Texting and driving.

Many of us use our phones and social media accounts to flake out on our people, and it’s messing with our heads.

That’s why every major world religion emphasizes a version of the Golden Rule: Do unto others as you would have them do unto you. When left to our own devices (pun intended), we are really bad at it.

Much as I dislike when other people flake out, I’ve done it. I did it to my friend Jozzy a few weeks ago. I’d verbally expressed interest in attending a book group he led, speaking as though I’d be there. In fact, I even put it on my calendar. But when the day arrived, I was feeling exhausted.

So I messaged Jozzy and told him the truth: I didn’t have the energy. He was gracious and forgiving. It would have been easy to forget about the incident, but I took a closer look. What had happened?

First, I didn’t take a pause before committing. Instead of realistically assessing my week, I let my enthusiasm take the reigns. You might say, “You couldn’t have known that you’d be exhausted!” But a cursory glance at my calendar told me otherwise.

Next, I took my own words too lightly. Before messaging Jozzy, I’d spent a few minutes pretending that I hadn’t ‘really promised’ anything. This made it easier for me to go back on my word.

You could argue, “You just made a casual agreement; it’s no big deal!”

I understand the lure of this reasoning, but I don’t bite. If we can’t rely on one another to mean what we say, then we don’t have much of a relationship.

Technology also gets us into trouble by making it easier to renege on our commitments. And if we don’t resist that tendency, it can erode the fabric of our friendships.

Years ago, if you wanted to cancel an engagement you’d need to speak to the person you were letting down. Now, you can tap a text or change your status with the swipe of a finger.

As psychologist and author Andrea Bonoir writes in There’s A Modern Affliction Ruining Our Friendships – And We’re All Guilty Of It, “Technology makes it so much easier to flake out … It’s infinitely easier and less awkward than having to talk to someone by phone or, worse, tell them in person.”

Yes, technology makes it more convenient to flake out and lie. But that doesn’t make it right. So the first and most important thing for us to do is walk the walk.

As Alex Cornell jokes in Cellphones Are Making People Flaky as #%@*, most people fall into three categories: latecomers, no-shows, and optimizers (that is, people who won’t commit to your plan until they’ve scoped out every other possibility first).

Cornell says, “… There is potential for a fourth category—those that show up on time, but … this is unlikely.” In other words, people who do what they say they will are rare.

Be that unlikely person. People will respect you for it.

But what do you do when you’re on the receiving end of repeated flake-outs? Martha Beck’s paraphrase of the Golden Rule is helpful here: “Never let others do to you what you would never do to others.”

The next time a friend bails on you yet again, don’t swallow your anger and pretend that it didn’t affect you. Your time and trust matter; when they’re trampled upon, it hurts.

Emergencies happen, and everyone makes mistakes. I’m not talking about such isolated instances here, but rather a pattern of getting left in the lurch. If that’s what you’re dealing with, say something.

People only get away with flake-outs because we are too scared to call them out and set the necessary boundaries:

I care about our friendship, and it’s not okay that you are consistently late. If it happens again, I will leave after [X] minutes. I need to respect my own time.

I love you, and I find it so frustrating when you cancel our plans at the last minute. Please either show up when you say you will, or don’t make plans with me at all.

You are allowed to value your own time. And when you begin to respect this most precious currency, you’ll teach others to do the same.

Caroline McGraw is the creator of A Wish Come Clear, a personal development blog that gives you carte blanche to change your life. Visit and receive free copies of her three digital books, designed to support you as you make mistakes, fall down, and dare to rise again. You can also follow her on Facebook and Twitter.

Why We All Need Time Unplugged

7 Tips to Keep Technology from Taking Over Your Life (from Wisdom 2.0)