When YOU Disappear Your Masterpiece Appears
By Kapil Gupta M.D. 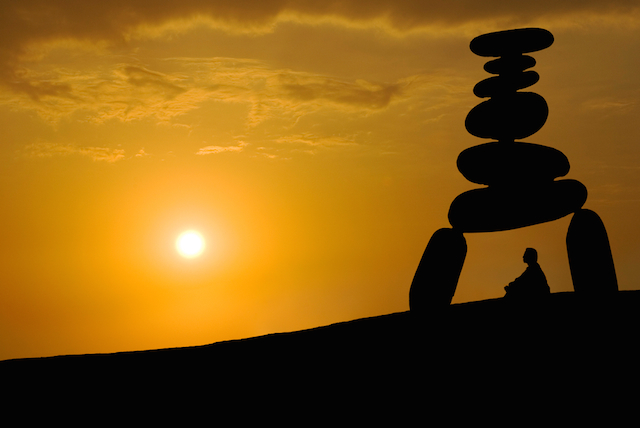 During my years in university, there was a cook that I remember to this day. He worked in the university grill. He was well known amongst the students and staff. For his happiness.

Whether it was 6AM or 6PM, whether it was weekday or weekend, sunshine or hail, he greeted everyone with a boisterous “Good morning. How are you this morning?”

There might have been forty people in the breakfast line and he would greet every single one the same way. Many, including myself, would often wonder how it was that a man could be so joyful. Regardless of the time or the day.

While this was the quality he was most known for, I found another which was even more impressive.

I once snuck into the kitchen to watch him cook. I wanted to see this man in his natural state. What was he like behind the scenes?

As he would make a grilled cheese sandwich, he would place the bread onto the grill as if it were made of glass. He placed two pieces of cheese onto the bread and he took his spatula and he pressed down evenly and gently.

His left hand poured a small bit of oil onto the pan, while his right handled the spatula. He placed the sandwich onto a plate. Precisely in the center. He took a knife and pressed his left palm upon the top of the blade and pressed down, and then after it was cut he flicked his left hand into the air as if it were a show.

But there was no one there to watch. No one that he knew of, that is.

Suddenly one of the servers dropped a plate which fell and shattered about thirty feet from him. He didn’t so much as flinch. His focus remained on the sandwich. On his ultimate creation. All the while, his lips remained pursed in concentration. His sleeves hung loose at the wrist. The entire affair was done with such rhythm, such grace. It was a ballet.

I remain convinced to this day that he did not even hear the plate fall.

I have spent years giving myself to my endeavors. It was difficult in the beginning. Distractions were the order of the day. And the mind was difficult to settle.

But it is much easier now. In fact, I have used this approach not only with work but with my daily existence. And things happen of their own accord. Whether it is playing the piano or writing a discourse, the fingers seem to find their own way. The instincts and the motions come to me rather than from me. And I sit watching the beautiful dance unfold.

This, my friends, is what I have discovered is the secret of making a masterpiece of your craft.

Superiors judge the individual for how well they follow the methodology. How good the result is. And whether every direction is adhered to. The type of individuals that are created in this manner are not leaders but followers. What is being taught is not creativity, but mimicry.

The world is addicted to the “how to.” And there is no shortage of individuals to indulge them.

If you examine an event or a time in your life when you created something valuable, a masterpiece of your creation, you will find that time disappeared. During those minutes or hours in which you worked, nothing else in the world existed. You were the only person in the world. And your task was the most important thing in the world.

And most glorious of all, there was no YOU.

Your hands worked of their own accord. Dancing to a rhythm all their own. Neuronal impulses traveled directly from brain to fingertips, bypassing YOU altogether.

There was no thought of what it might look like. There was no hope of anyone liking it. There was no fear of it being ridiculed. The entire affair was thoughtless, mindless, and egoless. This is how masterpieces are created.

In the end, it is YOU that stands between you and your masterpiece.

When you become lost in what you are doing . . .

Through his research on the human mind, Dr. Gupta has discovered the manner by which to transcend the mind. He travels the globe teaching audiences to transcend the mind in order to transform their life into a true living. And their work into a masterpiece. Dr. Gupta and his work can be found at KapilGuptaMD.com.