When You Keep Learning Instead of Taking Action
By Alexander Heyne 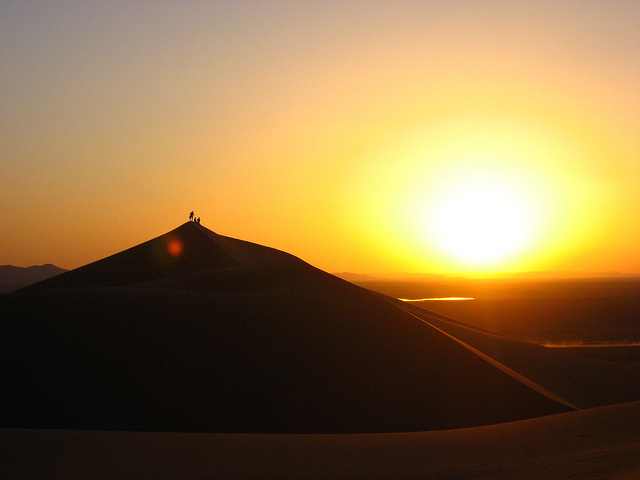 “Begin, be bold, and venture to be wise.” ~Horace

It was day five without food, meditating in a cave in the Sahara desert.

In 2009, I skipped out on two weeks of my senior year of college to go to the desert.

Ever since I was a young I had been into exploring the boundaries of the self. I had always wanted a period of time when I could totally be alone for days—not a word spoken to me, where I could go deeper into my mind than ever before until I simply evaporated.

So there I was.

Just the desert sands, the sky, and me.

And I was bored.

The mind-bending impenetrable boredom was the first thing that hit me. Hard.

And I’m not one of those people who is constantly multitasking. You can put me in a room for 3 hours and tell me to do something quietly and I’ll come out fine, sanity-intact.

However, there was something so stubborn about this boredom. I was wondering if perhaps I should’ve just gone back to my daily meditation routine instead of flying all the way into the Sahara desert.

The days eventually passed, the sun rose and set like it should, and every once in a while I had little visitors stop by.

I thought that was a little weird, since I knew dragonflies don’t go far from water.

A cloud of dragonflies flying in formation. That was pretty bizarre, I thought.

As the days wore on, I started experiencing the subtle effects of hunger. Pain and nausea wore off after day 1—and afterwards I just experienced weakness from the lack of food.

Dreams were much more frequent and incredibly vivid; I sometimes had more than 10 per night.

But as the days wore on I became curious as to why I was there, doing what I was doing at that moment.

Around day five when I was hanging in there, I had a feeling of someone sitting next to me who said, “Often times, to know God is to know oneself.”

It was similar to the inscription found at Delphi, “Know thyself.”

And I thought: well that was slightly creepy, although intriguing.

And incredibly vague, what does knowing oneself mean anyway?

As the afternoon sun set, I meditated into the night on that statement, and I thought about my past history:

I was notorious for “knowing” everything because of how much I read, but in reality I truly “knew” very little of the knowledge that comes via application.

It’s like in the Matrix where Morpheus tells Neo, “There’s a difference between knowing the path, and walking the path.”

All that book knowledge I had accumulated was essentially useless, because I hadn’t done anything with it.

I had merely put my brain into nice little jars, which sat on shelves to collect dust.

I was containing it, absorbing it, and hoarding it. And I pondered that for a while.

I realized that reading gave me the false impression that I was actually “doing” something.

I had deceived myself for many years into thinking I was somehow getting work done, when in reality, I was merely using my brain as a changing station where new information constantly came and went.

Think of it like this: If you are working on a business, or working on a diet, or implanting good habits, “reading and researching” means 5% of your 100% toward success.

That 95%, that hardest part, that facet that distinguishes the accomplished from the not-yet-accomplished, is simply the doing.

And reading gives you the false sense of accomplishment associated with knowing rather knowing by application.

If you are like me, my recommendation to you is this: stop reading so much.

Stop the constant “once I have everything together I’ll get started” type business plan.

One of the greatest gifts I’ve been given is the reminder that success comes first and foremost from doing—because ultimately the fruit only comes from sowing the seeds, not thinking about them, planning the garden, reading the farmer’s almanac, or talking to other farmers.

So whenever it is that you get back to work, or head to the gym, or work on your blog, remember to spend your life wisely in application, not only in thought, speculation, or research.

What good is the smartest scientist if he doesn’t share his findings with others?

What good is the most effective diet plan if you don’t try it?

What good are 400 more strategies for blogging for your business if you aren’t already trying any?

The utility of knowledge rests only in its application.

It is the keystone of success, and even the tiniest steps are worth their weight in gold.

Action is the greatest gift that only you can give to yourself, so get started.

Life Lessons from a Wanderer: From Lost Boy, to Carnie, to U.S. Marine

How 5 Simple Habits Made Me Love My Life More