When You’ve Fallen for Someone Who Isn’t Right for You Right Now
By M. J. Ross 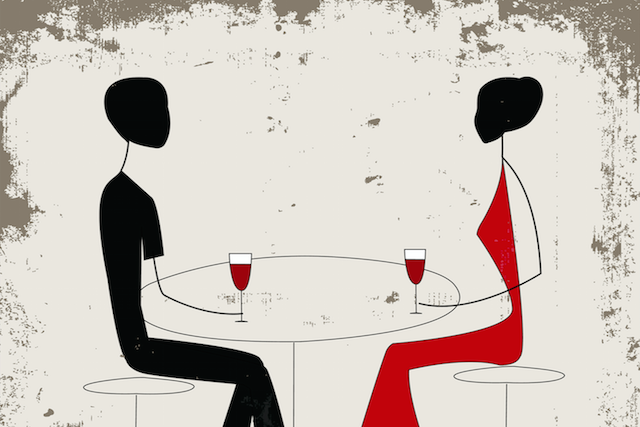 “You have to learn to get up from the table when love is not being served.” ~Nina Simone

I completely fell for someone.

It was one of those instantaneous connections, the kind that movies are made of. That’s how it was in my head, at least.

But it didn’t matter, as I was moving to another city, traveling, and exploring by this point. There was no way anything was going to happen, because there was no space in either of our lives for it.

Almost a year later, we found our way back to each other. It was fireworks. Long conversations, physical connection, honesty. We carved out places for ourselves. I found that I didn’t have to play games, that I could be completely open with him.

I decided to make space for him in my life, no matter what.

There came a point when I asked him whether we were working toward anything more substantial, and though he admitted to feelings for me, he said that he didn’t have the capacity for anything serious.

It stung, yet how could I let go of someone who made me feel this way? The highs were so high.

We tiptoed around a relationship that stemmed from something real, yet became based on addiction and longing. It was a dangerous cycle of feeling broken when he left and high when he re-entered my life.

I knew he was working through his demons, too, and though I believe he cared for me on some level, he didn’t have the ability or desire to give me what I needed—his consistent presence, and the foundation for something healthy and meaningful outside of the honeymoon and infatuation stages.

I was taking what was offered to me, even though it wasn’t enough.

Whenever he’d come back into my life, I’d cling to him emotionally and our connection would be as strong as ever, yet I’d return home in tears, knowing that it would be a long time between ‘hits.’

I felt myself shatter and became prickly toward him when we saw each other, unwilling to properly communicate my discontent, since it came at the risk of one of us finally walking away.

We could both see I was getting hurt and that he felt stifled by expectation, yet neither of us had the capacity to shift our desires or leave, so we’d find our way back to each other again.

It was the perfect storm. Eventually, we had to hit a wall.

When we ended, it was not because I’d stopped caring, but because we were unwilling to shift what we wanted or could offer one another.

There was no drama of hurtful words—he had not lied to me or cheated, and I hadn’t been anything but upfront about how I felt or what I wanted. We just weren’t on the same page.

Even though the split felt counter-intuitive, we were in an uncomfortable stalemate. The only option was to walk away. I learned some important lessons, however.

Remember what you are willing to accept, and be honest with yourself about it.

At first, I merely wanted to know he had space for me in his life. I thought I could accept our off/on dynamic because I was in a place in my life where I was focusing on what I wanted to achieve outside of intimate relationships. But the more I was around him, the more I wanted something meaningful.

I began to strongly believe that we could be in a healthy and functional relationship; however, my belief didn’t change the present reality, which was only hurting me.

While it’s good to see how things unfold, if someone doesn’t treat you the way you want to be treated and the whole situation is bringing you down, you are doing a disservice to yourself by staying.

You need to take care of yourself before you allow anyone else in your life. No one is there to ‘fix’ you.

Because we had such an intense connection, I lit up around him. I felt like I was the best version of myself. Though he was someone I genuinely cared about, he inadvertently became an easy way for me to feel better and worthwhile, and I came to rely on that validation.

We were on shaky ground already, and my dependence on his fluctuating presence made the way I perceived myself even more tumultuous.

It’s difficult to have a healthy relationship if someone is filling a void instead of just adding to the great person that you are. The first step, however, is to believe you’re worthy outside of that connection.

I needed to learn to be happy with myself and my decisions without someone reassuring me. For me, that occurred by exploring the things I craved to my core: writing, traveling, reading, and meeting new people.

I committed myself to nourishing experiences, recognizing my own thoughts and habits, and behaving in a way that was kind to myself.

You can’t pry someone’s heart open, nor might you be enough to change them.

If someone doesn’t want to be with you, or doesn’t have the capacity to be with you, then there is nothing left for you to do but respect that decision and try to reassemble your life without them.

Both people need to be willing to make an effort and come to the table with open hearts and open minds. You can’t fight for something if it’s not on offer.

If it’s meant to be, it’ll happen. But if it can’t now, you have to move forward.

There is a time to fight and sometimes, a time when you need to walk away. Instead of frantically searching for a resolution, sometimes we just need to get off the emotional roller coaster.

Whether that means taking time apart or splitting for good, there is opportunity in learning to live your life as best you can outside of your relationship. You never know what might happen down the line, but unless a shift occurs for the both of you, it is impractical to entertain the possibility of a reunion.

I’d love to say that my feelings have subsided completely, that I don’t feel a sting in my chest when I think of him, but that isn’t the case. However, I have enough self-awareness to know that we couldn’t continue that cycle, that I needed someone to be on the same page as me, and that I needed to grow and heal before I could be in a relationship—with him or anyone else.

Everything in our life is a reflection of the choices we have made, and once we’ve exhausted all possibilities, we need to start making new decisions.

Though it can feel counterintuitive, letting go of a love that isn’t good for you right now is an act of kindness to yourself.

M. J. has a background in psychology and a keen interest in mindfulness therapy. She finds comfort in the universal familiarity of interesting conversation, Earl Grey tea, and good playlists. A strong believer in a well-rounded approach to well-being, she also develops platonic crushes on inspiring people and enjoys exploring new places in the world.

If You Want a Healthy Relationship, Value Yourself