Who Are You Protecting? Why Telling Your Story Is Powerful
By Shona Keachie 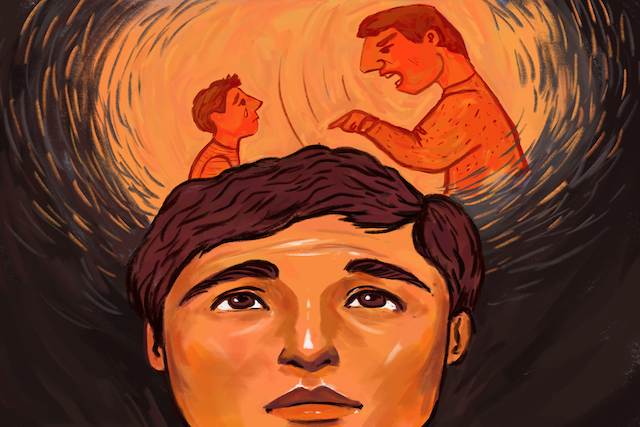 “There is no greater agony than bearing an untold story inside you.” ~Maya Angelou

Throughout my childhood experiences I did what every child does and rejected parts of myself. It makes sense because kids depend on adults for survival, so I was in no position to reject my parents. But as an adult I feel it is now my job to reclaim those parts of myself.

While I had two parents that loved me and what I’d describe as a normal childhood, nonetheless I became hyper-attuned to others, over-sensitive to criticism, and a perfectionist, particularly under stress. It led to all sorts of pain within relationships and, upon becoming parent, I could see I needed to address some things. I had little sense of self and had to learn about having and holding healthy boundaries.

I have been fortunate not to have been directly subjected to any of the more readily recognized trauma (sometimes known as big-T trauma), like addiction, violence, or sexual abuse. But my childhood was dominated by the kind of trauma that descends from the big stuff.

The aspects of my dysfunctional persona I mention above come under the heading of developmental trauma. I think it’s important to expose these aspects of who we become in the world as they have been getting perpetuated subtly throughout families all over the world for generations and they prohibit our collective growth.

Yet, for all the personal experiences I have shared, one I have never spoken of until recently is probably the one that shaped me more than anything else. Simply put, I had a mother who did not cope well when looking after us kids on her own. I learned to think ten steps ahead and project into the future in order to avoid any major meltdown. It drove perfectionist behavior in me, and I learned to choose my words carefully.

Why have I never spoken about it? I suspect this is multifaceted and ranges from things like not wanting to air dirty laundry, so to speak, to knowing that both my parents (like most parents) did the best they could with what they knew and the resources they had available to them at the time. Yet these were my experiences, for better or worse they shaped me, and if I tell my story it might help someone else.

To be more specific, mum used to often drop into this hyper tense state when she was alone with my brother and me; something I now readily recognize as a trauma state. She would say she was “up to high doh” (an old Scots expression) with our behavior, then snap at us, scream and yell, and chunter on afterward for a period of time somewhere else in the house.

When she would yell at me or chunter afterward, I now know it was most likely a deflection of her own pain. As my bedroom was above the kitchen I could hear the aggressive slights about me “being a bitch” or a “slut” or “a selfish cow” even though I was only a child.

When my father got home she would immediately approach him using a baby voice, another thing I could hear from my bedroom, conveying just how stressed she was (we kids usually being at fault). In the evenings Mum would then sit in front of the TV sucking her thumb, which I suspect were signs that she was likely regressing into her child self.

Watching this cycle, at the time, made me feel disgust and anger on top of the fear I already felt in being under her watch each day. My nervous system was under constant alert not knowing what aspect of her would show up.

Everything was our fault because we had broken the rules. With hindsight, and far more knowledge of children’s development, I now know we were just going through the normal growth and development cycles that kids go through rather than being bad kids.

Because it was probably a dissociative state that emerged when my mother was in flight-or-fight mode, it is possible (especially since Mum never did any meditation or therapy around this) that she had no clear memory of acting like that, or the frequency with which it occurred. I expect she was too identified with the thoughts of how bad we were and how bad it made her feel.

Dr. Gabor Maté’s words ring true: “It is often not our children’s behavior, but our inability to tolerate their negative responses that creates difficulties. The only thing the parent needs to gain control over is our own anxiety and lack of self-control.”

My mother was not able to do that, and nor are most people to be fair. It is far easier to blame people or circumstances than take a good hard look at ourselves and have a willingness to explore the hidden depths that we are held hostage to.

All this was unspoken with my mum. It is like it never happened, as if my brother and I somehow lived in a parallel universe.

Likely looking after young kids on her own was overwhelming and activated the trauma stored within her, perhaps in response to her own father’s violence and/or possibly the disgust at my grandmother’s passivity about it, or her own guilt in not doing something more (even although she was incredibly young at the time and couldn’t possibly have intervened).

However, when she was diagnosed with cancer my mum did say, “You know how I like to stick my head in the ground” when I tried to share with her the metaphysical possibilities related to the disease. Since my mother was most often too open with her opinions and usually gave us direct answers to questions we asked, sticking her head in the proverbial sand wasn’t something I immediately associated with her.

But now in retrospect I wonder whether, on some level, she may have been acknowledging her dissociative behavior when bringing us up, and the effects it may have had on us kids. Certainly it wasn’t something she ever directly acknowledged.

Though she did not readily share details during her life, she was simply what I would have called very dark on her father and her eldest brother. Just before she died I discovered her father was an abusive alcoholic. I also knew her eldest brother, a half sibling, abandoned the family as his father before him had abandoned him.

My mum, like a lot of people, never saw any value in revisiting those childhood experiences; she couldn’t fathom why anyone would partake in coaching never mind counseling, perhaps because she felt herself adequate enough and externalized her feelings. She certainly did not believe she was in any way held hostage to her experiences, which is what most of us would like to believe I expect.

As a result, I felt very alone and invalidated. My parents had each other, whereas my brother and I were left to deal with our emotions alone. Certainly it often felt our needs were not important (which was the predominant theme of the “do as I say and do not argue/we know best” approach to childrearing that had gone on for centuries).

While, like anyone, I could express many more things in my childhood that have stuck with me, experiencing my mother’s own trauma when we were alone with her, which was for significant amounts of our early life, elicited a feeling of constantly being on edge.

As I grew I spoke up more, unwilling to accept the emotional load being put on me, which resulted in a lot of raging arguments in my teenage years.

No one except my brother would have much of an appreciation for this, because around others my mother was quite different. In fact, around others, especially my father, she would have felt safer and, therefore, calmer. This Jekyll and Hyde behavior obviously made it very difficult for me to bond with a mum who, for all that I knew loved me, because my internal shields were well and truly up.

While I did not have the words for any of this back then, having caught myself descending into this chuntering state with both my partner and our own kids at times was a red flag for me. I knew I had to address my own reactions to break the cycle.

All that said, I feel blessed with my experiences because they helped shape me and to relate to others’ struggles and other dysfunctional behavior. I feel strongly that I have come into this life to shine a light on this more insidious type of trauma, one that lives in all of us in various guises, and help break the chain of pain that is occurring in pretty much every home across the planet. So in this sense, um was the perfect mother for me.

I also recognize that this was but one facet of my mum, one I have come to see with compassion, and she had many more that were far more positive. As a grandparent she was generous and loving, as a friend she was insightful and loyal, and as my parent she was all those things too; I always knew I was wanted and loved, it just did not always feel that way, especially when she was “up to high doh.”

It seems to me that through shame, guilt, and pain very few of us talk about our experiences, not realizing the person next to us is living their own twisted version of the same. The systemic issues we face in society today are all fed by the ongoing cycles of trauma within us and can only be solved by bringing them into the light.

We don’t all have to share our stories publicly. Even just opening up to a trusted friend or therapist can help us understand what we experienced, chip away at our shame, and break the cycle of pain so we don’t unknowingly repeat the same patterns.

So who are you protecting? What trauma shaped you? Is it time to tell your own story? Maybe sharing is the key to your healing, or helping heal someone else.

Dear Mom and Dad, Thank You for the Years of Trauma