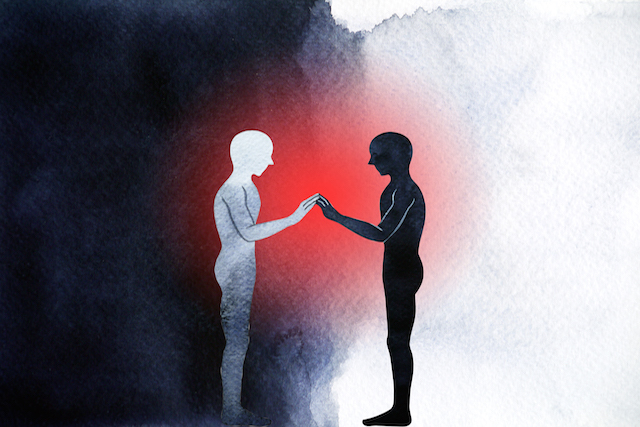 “You only see in others what you have in yourself.” ~Annette Noontil

I now recognize, after observing painful patterns repeat many times, how things that trigger me are just lessons I need to learn that are often delivered through other people. The more painful the experience, the more I can see (in retrospect) I learned from it.

Every now and then, when I find myself getting sucked into thoughts about the rightness or wrongness of a situation and how much pain it’s causing me, I take a step backward. I can see that people are just the mechanism to my growth, and painful experiences are just big Wrong Way signs redirecting me to my best life.

In his book Scattered Minds, Dr. Gabor Maté wrote, “It is well recognized now that people will form relationships with others exactly at the same level of psychological development and self-acceptance as their own… What we might call the law of equal development holds true even if the people themselves buy into the mythology that one of them is more emotionally mature than the other.”

I love this insight from Dr Maté, especially when he goes on to give a typical example of a married couple with one spouse that appears to be functioning in the world more successfully than the other. When the relationship is examined more closely it can usually be seen that both people have a lot of maturing to do in order to be able to function healthily as individuals rather than in a codependent state.

It’s no coincidence that we form relationships with people who trigger us. We are drawn to people who are, in some way, a match to our own issues, and they both challenge us and help us heal and grow.

But all this holds true whether it’s an intimate relationship or a more distant one; if someone triggers you (positively or negatively) they have something to teach. Michael Kerr puts it simply as “People gravitate toward their emotional mirror images.”

“People tend to sort themselves out by levels of emotional development for many purposes, not just marriage, “ writes Stanley Greenspan, “because those functioning at different levels are practically speaking different languages…. People widely separated developmentally in fact have very little to talk about.”

It can be tough to look at people I have, at one time, literally despised and consider that we were emotional mirror images—for example, a jealous colleague who went out of her way to discredit me on a number of occasions. This doesn’t mean that I am a bully because someone bullied me (although it could mean that for someone else); it means that we both had an equal emotional stake in the same interaction.

In retrospect, I can see that my former colleague triggered pain from my childhood relationship with my mother.

My colleague’s modus operandi was an unfiltered lashing out at anything that stood in her way. Her unprofessional conduct went unchecked and unmanaged because she had been promoted for the short-term results she’d achieved.

Her behavior reflected the unfiltered (tongue) lashing I often received from my mum when she was feeling highly anxious.

As a child, I learned to stay out of trouble by anticipating her emotions and striving for perfection in my behavior so that I received no criticism (which was usually unfounded and always delivered in a way that felt crushing and unfair).

Not that I was ever passive, but when I wanted something I would go after it from a point of defense, justifying myself rationally rather than having healthy boundaries around my own needs and desires.

To be criticized publicly by a colleague was, therefore, not something that felt safe to me. My attempts at repairing the relationship privately were unsuccessful, and it was not until I stood up in a meeting and told her pointedly that I would not allow her (nor anyone else) to bully me that I garnered her respect.

This experience allowed me to see how much hurt I’d been harboring from my childhood, and to put energy into healing that old wound rather than perpetuating any more situations that echoed it.

With the benefit of hindsight and my own years of parenting, I can now see I wasn’t responsible for my mum’s anxiety; rather it was an amplification of her own anxiety as a child in reaction to the culture and environment she grew up in, and the way her behavior was managed.

While it’s easier for me these days to detach myself from issues that trigger me emotionally, note that I do still get triggered. That, I believe, will never change because there is no surer way to know what we do want without first experiencing what we don’t want. It is just best not to get stuck feeling sorry for ourselves.

I’ll admit it’s sometimes hard to see a way through the emotions of the moment, especially when it relates to an ongoing situation. When I’m triggered, it’s still through other people whom I would dearly love to validate my view, just as they would no doubt love me to validate theirs, so there is a lot to work on.

The beauty, though, is that I mostly choose to do it from a point of intrigue and willingness to learn and grow rather than feeling powerless and at the mercy of others.

Again, note I said mostly. Old habits die hard, and there are still many times where I’ll find myself turning to confidants to rant about something. For this reason I choose to confide in people who gently prompt me back to the observer’s chair, and the broader view.

And when similar situations keep arising, I know that life is presenting an important lesson for me. It’s not always immediately obvious what the real lesson is and how I can overcome my struggle, but experience has taught me that things become clear when they are ready to; my job is to cope as best as I can with my frustrations rather than make myself miserable.

And since the lessons are most often delivered through others, I try not to vilify them for their part. I know that in the future I will be thanking them—even if only inwardly—for the role they played in my ongoing growth and journey through life.

So what are you currently triggered by, and who is the focus of your frustrations? Think about past situations where you’ve felt similarly. When was the first time you can recall feeling this way? Try to see the pattern, and what it might be telling you.

Rather than living through the pain as a helpless victim, try to see the lessons you’ve come to learn. In whatever way the lesson is being played out, the true lesson will be some version of learning to love yourself more; it always is.

Can you imagine a world full of people who are seeking their power through self-love rather than trying to take from others? Now that is a world I’d like to live in.

To Reduce Stress, Stop Globalizing and Put Things in Perspective

How to Free Yourself from Your Spiritual Drama