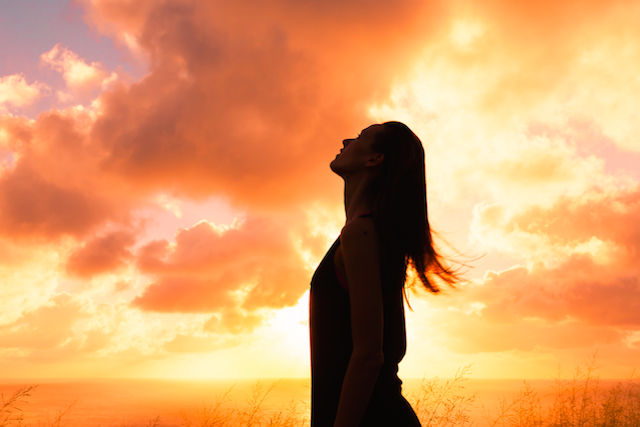 “In our struggle for freedom, truth is the only weapon we possess.” ~Dalai Lama

I often ask myself what led me to that place of feeling like I didn’t deserve to love myself.

When I look back to my youth I remember feeling hopeless. My mom, my hero, was sick a lot, and I could tell she wasn’t happy. And my dad didn’t always know how to act around a sensitive little girl.

There was a “funny” story told at family gatherings about how after seeing the movie Mary Poppins, I would sit for hours in my little red rocking chair outside yelling, “Mary Poppins, please come and take me with you.”

I would laugh alongside them at these stories, but in my stomach I’d always feel this sadness.

I had wanted a flying nanny with a magical tote full of exciting gadgets to take me away to that land of dancing penguins, laughing, and flying kites. Away from the anxiety and sadness about my mom’s health.

I felt afraid of losing my mom and not having any control to make it better for her. So at a very young age food became my best friend. It was a comforting to me, and I loved that I could actually control something in my life.

In high school I discovered Dexatrim. This was my secret. And there was shame in that secret. But I got better and better at numbing my real feelings.

I based my happiness on numbers—how much I weighed, how many calories I ate, how much money could I make, how many men could I get, and how many credit cards could I own.

I attracted men who mirrored my thoughts about my body. Feelings about never being thin enough, smart enough, sexual enough, or pretty enough.

All of this was in my head, controlling my life and ordering me around.

So there I was, in my early forties, a successful makeup artist in the film industry. I had “the perfect life”—beautiful daughter, a gorgeous home, a handsome husband, vacations, cute dogs, a nanny, and a housekeeper.

What the hell did I have to complain about? I was living the dream.

But there I was, a middle aged woman who, at the very core of her being, despised herself. My life revolved around constant deprivation, spending money recklessly, and allowing myself to be in a controlling, verbally abusive relationship.

I would love to say that one day I had enough and woke up from this self-defeating fog, but the way I’d treated myself had taken its toll. I was a forty-four-year-old zombie.

I was numb, depressed, and basically dead inside.

One day I heard the familiar voice of my husband yelling at me. Normally I would tune it out and accept the misery of it, but this time I noticed my six-year-old daughter was listening. What I saw in her expressions to this woke me up.

Damned if I’d allow this sad, lonely, self-loathing history to repeat itself.

I got help and moved out with my daughter and dog in tow.

I slowly allowed feelings of anger, vulnerability, fear, and helplessness to come in, without giving them power over myself.

I got better at setting boundaries with friends and men.

I became accountable for my role in my life.

I made peace with my ex-husband and myself.

But my best friend, food, was a much tougher relationship to end.

With the help of an amazing therapist, I did a great amount of work on myself and attracted a kind, loving man into my life. He made it safe for me to talk about the shame and guilt I had around my body and food.

However, that “mean” Alison was still very much alive. One day I hit a wall. In two years I had lost twenty pounds, gained twenty-five, lost thirty, and gained thirty-five. My best friend, food, had become my worst enemy, and my body was paying the price.

So I did something crazy: I allowed myself to stop all the constant chatter that was in my head. I sat quietly and let myself feel.

And did I ever feel.

All these feelings came flooding in: Guilt. Anger. Despair. Sadness.

I felt asphyxiated. I wanted to run, shut it off, and go back to being miserably numb, but somehow I knew this is where it needed to end, right where it began. Inside of me.

By not judging my feelings, by not making them right or wrong or giving them power over me, I learned to simply use them as a gauge for what I needed in that very moment.

I was now able to love my body no matter what the number on the scale was because I was no longer controlling my body as a distraction from my feelings.

I learned to not fight the feeling of being uncomfortable and to just accept it. This enabled me to hold my daughter while she cried and know that it was enough to just be there; I didn’t need to control or “fix it.”

I also allowed myself to be vulnerable around my husband by sharing my feelings about my body and the shame I had felt. His loving support allowed me to feel safe to express my feelings openly without worrying he would leave me.

It also allowed me to finally feel all the beauty in my life without worrying it would all go away.

Once I allowed myself to just sit and feel, I could finally hear what was really missing in my life: all I’d ever wanted was to feel safe, loved, and heard, and to know I’d be okay if I let myself feel out of control.

Food stopped being my friend and became a way to fuel my body. I allowed real friends in, ones that allowed me to be open, honest, and vulnerable.

I changed my approach to money, no longer charging everything in sight because I was terrified of scarcity. I allowed myself to feel scared knowing that this was simply a fear, and it had no power over me.

I learned that it was okay to show up as myself, and that controlling my life was not going to allow me to have the balance I so desperately craved. That letting go of control, allowing myself to feel, and relaxing in the present gave me happiness without having to stuff my feelings down or rely on food to soothe me.

So you see, the very thing that scared me the most, allowing myself to feel, was actually the key to a happy life.

It may seem counterintuitive, but numbing pain isn’t the way to escape it, because stuffing it down doesn’t make it go away. True freedom comes from feeling, learning what we need, believing we deserve it, and having the strength to create it.

Alison decided to follow her passion and leave the entertainment industry to start coaching women to stop their inner critic, stop focusing on dieting, and become the healthiest version of themselves. Her mission is simple: Sustainable weight loss has to begin with self-love. You can get her free Self Love Meditation here and join her free Six-Week Holiday Self-Love Challenge here.

You Have to Feel it to Heal It: The Only Way Out is Through

Finding Peace in the Dark Corners of Your Life