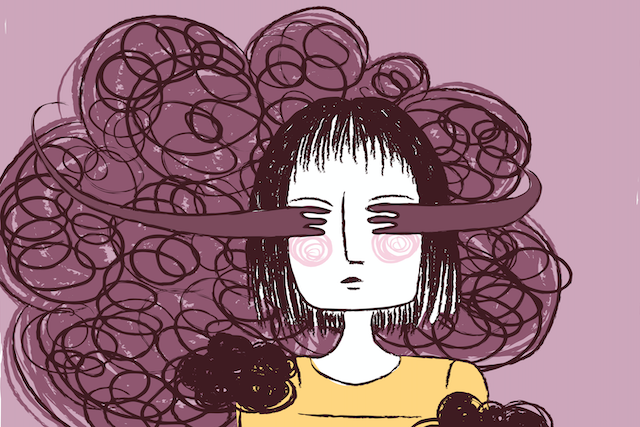 “Forgiveness is giving up the hope that the past could have been any different.” ~Oprah Winfrey

When I was a little girl, I made many wishes. At first, I believed all of my wishes would come true, just like in the fairy tales my mother read to me before bed. However, slowly but surely, life changed my attitude, stole my optimism, and I stopped wishing.

My parents fought a lot, and their unhappiness made me believe that I was not good enough. Poverty replaced my birthday wishes with socks, the bible, and sheets for my bed.

When my parents divorced, my father abandoned me and I was sure I was broken and unworthy; after all, I believed that if a father could leave his own child, then it must be my fault.

My mother’s hurts turned into bitterness. Criticism, disappointment, and blame replaced her nurturing voice that used to calm my fears. The few wishes I held onto faded into the fog of confusion, fear, self-hatred, and catastrophe.

Instead of wishes, I believed that bad things would always happen to me, and I made an unconscious pact with my mind, body, and spirit to close the door to good things ever happening.

My heartache and grief drained my childhood innocence, and I transformed into a wounded adult, going through the motions of life not feeling or experiencing much of anything and keeping my guard up for the next brick to fall on me.

Life is Good, but Past Trauma Colors My Perspective

Despite the good things that happened to me throughout the past twenty years—marrying my husband, vacationing in Maui, learning from the best dance coaches in the world, graduating from college with two degrees, obtaining a license in clinical social work, and becoming a proud cat mama—I seem to be wired to notice the flaws in my life.

I look for ulterior motives, the letdown behind the positive illusions. Frankly, I don’t give myself permission to truly feel happiness, anticipatory wonder, or joy.

Catastrophic thinking and deprivation from feeling joy or happiness is a protective mechanism: a shield from trauma. I had a lot of traumas growing up, and I learned the best way to protect my vulnerable heart and soul was not to get my hopes up.

If I don’t get my hopes up or wish for anything positive, then I will not feel the despair, grief, and stings of disappointment.

Disappointment can provoke some of the most painful grief.

I never wanted to feel that grief from my childhood again, so I set up walls around myself to prevent any light of joy from cracking through.

I know this sounds like a terrible way to live, but the cost of feeling happiness and joy is too great for many of us with trauma histories. Joy and happiness are bound by memories of heartache, disappointment, abandonment, abuse, and scars.

There is nothing more tragic to a child then to have their wishes crushed. In homes with trauma, humans and life crush wishes moment after moment.

My Adult Encounter with a Childhood Wish

There was one particular memory from my childhood that was not shackled by grief or pain.

I loved Debbie Gibson, the 1990s pop star. I lived through her music and found my existence through her rhythms, attitude, and empowering lyrics.

Whenever her music played, the sounds transported me to a happy place where I was free to be me without judgment, abuse, or restrictions.

Debbie Gibson remained linked to that part of my childhood that was pure and innocent—unscathed by hardship, poverty, and abuse. Just like her song “Only in My Dreams,” I harbored a small bit of hope that “Only in my Dreams” my life might be different.

Therefore, when the opportunity presented itself for me to make contact with her, I didn’t hold back.

My childhood fantasies took hold and propelled me to venture into the world of wishes and hope. I let my guard down and let a little bright light in.

I made a video of myself playing a piano compilation of her hit songs accompanied by a message of thanks for how her music and voice grounded my resiliency.

To my surprise, Debbie Gibson returned a video message to me, not only playing the piano, but promising to participate in an interview with me regarding a book that I had just finished writing.

On the night that I received her surprise video message I was beside myself. I screamed, cried, laughed, jumped, and even tripped over myself while barging through my husband’s shower doors to tell him Debbie Gibson had contacted me.

For that moment, I was thirteen again, truly enveloped in excitement, wonder, hope, and eternal belief that good things can happen—wishes can come true.

When Past Hurts Show Up in the Present

And then it happened…. The unbearable pain of disappointment—

It has been three years since I initially made contact with Debbie Gibson. I still have not met with her despite receiving not just one video message but two video messages from Debbie Gibson, herself, stating that she would meet with me for an interview.

The pain of disappointment was so much worse than I ever imagined. I had truly let hope back in, and I had allowed myself to believe again. I kicked myself because I broke my own pact to myself: Never get my hopes up.

My blood boiled because I felt so unseen and abandoned. I was that little girl again whose parents promised the world but gave breadcrumbs instead.

Debbie Gibson became symbolic of the bullies at school who pretended to like me but then didn’t show up for my birthday party. Debbie’s manager symbolized my parents who didn’t respond to my cries for acknowledgement, empathy, and reciprocity.

I kept telling myself that if her manager would just tell me “No,” the situation might hurt less than keeping my hopes up. Instead, for three years I waited and imagined how great our meeting was going to be, what I would ask her, and the topics we would share.

I soothed the part of me that was accustomed to adults disappointing me by convincing myself that Debbie was busy; she was different. She would honor her word.

She told me the interview/meeting could not happen given Debbie’s recent surge in fame and upcoming album release.

My translation: She couldn’t forego an interview with Access Hollywood to make time for a “nobody” like me. The wound from my childhood opened again.

Now I recognize that feelings are not usually rational. Oftentimes a triggering event can appear totally insignificant, but regardless still provokes real and intense reactions.

My emotional reaction to Debbie Gibson’s lack of follow through for the past few years felt like the worse kind of rejection and abandonment, two feelings with which I was intimately familiar since childhood.

Face-to-face with my resentment I tried to go behind the feelings and forgive but I could not.

As I ranted and raved to my husband and friends, day after day, they consistently reframed the situation by telling me that “At least I got a response from Debbie Gibson” and “She did the best she could, and I could never relate to the demands celebrities face every day.”

But I didn’t care about the rational content or logic—my experience was purely emotional. The feelings embedded in the emotional part of my brain where hurt is hurt regardless of the who, what, where, when, why, or how.

So… Why Can’t I let Go and Forgive?

I know festering feelings are not good for physical health. I am all too familiar with how negative emotions play out in the theater of my gut and make my Crohn’s disease flares worse.

However, despite knowing that forgiveness was a better alternative to my negative emotions, I still could not let go of my resentment—so much to the point that I told myself I would not buy Debbie Gibson’s upcoming album.

Instead of peace, closure, and just letting go, I insisted on holding onto my grudge. I fed my disappointment, anger, and feelings of abandonment, to the point that I retaliated in my attempts to find ways to cut a celebrity with whom I didn’t even have an authentic relationship out of my life.

I wanted to punish her for ignoring me and hurting my feelings. Hurts will propel us into the land of nonsense.

The child in us will do anything to protect ourselves from pain.

My Debbie Gibson story is merely a representation of many stories in my life where I behaved similarly in attempts to protect my heart and not feel the pain of my traumatic childhood past.

My reaction to Debbie Gibson’s lack of follow through appears petty, irrational, and on the surface immature. However, if in childhood we don’t feel seen or our existence is not acknowledged by the adults in our lives, we hold these hurt feelings in our bodies and minds.

Feelings find ways to get our attention and express themselves through the most inconvenient opportunities.

When we feel the pangs of disappointment because adversity rips our wishes at the seams, these same feelings get triggered by a multitude of different scenarios that happen to us in adulthood. Debbie Gibson was my trigger especially since she meant so much to me in my childhood.

I had a lot of skin in the game, so to speak.

Finding Peace with Myself and Letting Go

It is human nature to fuel anger and resentment because it serves as the perfect distraction from the grief underneath the disappointment. But it is also human nature for people, including myself, to make promises that we cannot keep.

Even I, without fame and fortune, get caught up in my own life and let people down.

Even, I, prioritize my time with people and situations that further my own agenda.

Thankfully Debbie Gibson reminded me that I still need to heal from the hurts in my childhood and practice self-compassion.

She showed me that I am still capable of experiencing childhood innocence and unadulterated joy.

So, as I contemplated why I could not let go of the “Debbie Gibson letdown,” I remembered her humanity. Debbie Gibson and I are not that different. We are both flawed humans trying to find our ways in life, and we both wish to leave an impact on this physical world that says…

Casey Hersch, MSW, LCSW, is a licensed clinical social worker, author, and founder of www.lightyoursparkle.life. She specializes in integrative treatment models for chronic illness by bringing awareness to the connection between our physical and emotional bodies. Our passions are at the center of health and ballroom dance and pet companionship are vivid examples. Inspired by her own struggles with autoimmune illnesses and trauma, she educates about empowerment and how to build individualized healing plans.