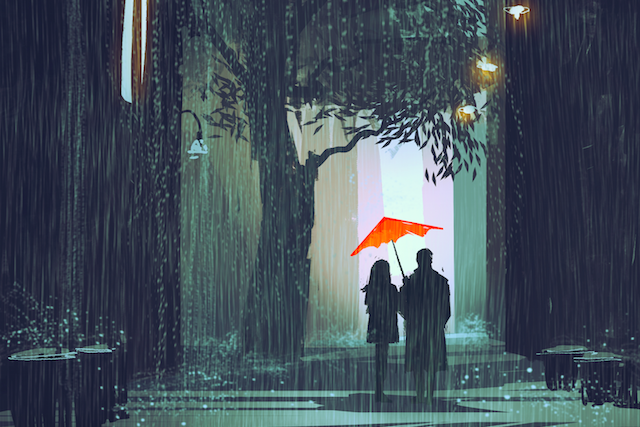 “How thankful I am today, to know that all my past struggles were necessary for me to be where I am now.” ~Unknown

I met my ex-boyfriend, let’s call him Derek, through work. We were introduced through mutual co-workers, and then we hit it off and began dating.

We had a connection right away, partly based on physical attraction, but also we laughed a lot together, and I felt cared for by him.

We lived in different cities at the time, but would see each other every other weekend. We dated this way for a year and then talked about moving in together.

We decided that I would uproot myself and move to his city because he had a steady, stable career and could not leave it. I had extreme anxiety about moving away from my friends and my life, but for several reasons, the fear of being alone being the major one, I decided to move.

Living together was tough at first. We had different ways of doing things, but we figured it out—or so I thought.

A few months in, I became severely depressed and my past anxiety came back in full force. I’d gained twenty pounds in four months due to extreme emotional eating. I used food in a desperate attempt to feel better, trying to fill the void any way I could.

Six months after moving in together, Derek broke up with me one day when I got home from work. I was emotionally and mentally unstable and completely blindsided. I felt totally alone and given up on, and I had no idea what to do. I packed a suitcase, put my cat in her carrier, and left.

There wasn’t one person I knew who didn’t support me during this time. I moved back to the city I had left six months earlier and lived with my sister for a month while borrowing money from my mom.

I talked to my friends and family every day to try to feel better, and they offered their help as best they could.

Support from most people though meant bashing Derek, the breaker-upper, and letting me know why I shouldn’t have been with him or why we weren’t meant for one another. For some reason, though, I knew in my heart that focusing on his negatives was not the way I needed get over him.

Derek was not a bad person; after all, I had fallen in love with him not that long beforehand. He was not evil, nor selfish, nor a coward. He was necessary. He was in my life for a very specific purpose, which I now know was to crack my wounded, scared, anxious heart wide open for healing.

The depression wasn’t enough to get my attention, and neither was the anxiety, nor the extreme weight gain I had experienced. I needed him to guide me toward an opening that I was completely blind to.

Had I not felt my heart break a thousand times over at the end of that relationship, I don’t know what torture I would have put myself through or how long it would have taken for me to begin the healing journey I have been on since then.

In putting myself back together, I knew I needed help. I knew I could not do what I needed to do by myself, nor did I want to. I wanted support, I wanted tools other than medication, and I wanted a different life than the one I had been living.

I began seeing a spiritual counselor who helped me heal and learn to listen to my heart. We worked extensively on my wounds from childhood and my fear of abandonment, which came from losing my father to suicide at a very early age.

I needed to come face to face with my inner self and recognize she was crying out for attention and love.

In the past five years since getting help I’ve also changed my diet, the way I exercise, my view on my body, my friends, my relationships with my family, and view on romantic relationships.

I now believe that every single person we come in contact with shows up in our lives for a reason. Had I not dated Derek, I would not have woken up to my life. I would have stayed asleep and continued to live in a way that did not nourish my soul.

I never would have healed enough to allow another beautiful soul into my life—a man who is now my partner, who supports me in a way I would haven’t thought possible five years ago.

Two years after my relationship with Derek ended, I was back working for the same company where he and I met and we had our annual meeting coming up. I would see him for the first time since I moved out two years before.

I was nervous but knew the healing I had done around our relationship would help me. I had also practiced, in meditation, what I wanted our meeting to feel like when I saw him again.

As I sat down in the restaurant and got settled at our annual meeting, I felt someone behind me come around for a big hug. It was Derek, and nervously smiling at me.

I opened my arms and hugged him warmly, my heart beating out of my chest. I was scared I was going to get emotional, and that all of our co-workers would see me break down and get upset. Instead, I hugged him, smiled at him, and asked him how his family was.

We chatted pleasantly for a few minutes and then I paused. I looked him in the eyes, feeling a fondness and said, “I need to thank you.”

He looked at me with shock and asked what for. I told him about the journey I had been on since our breakup, the healing I had done, and the forgiveness I was able to feel. I owned up to my part in our relationship being unhealthy and told him if it hadn’t been for him, I may not be alive today, happy, and connected to myself.

He had no words for a moment. Then he said he was afraid that I was going to be upset, and that he felt extreme guilt for how things ended, but he didn’t know what else to do at the time. He also shared that he’d learned since then that he needs to communicate better with people and work on understanding.

I know some people hear my story and think there’s no way they could ever forgive their ex or be friendly or open to them again. And please understand that forgiveness does not mean condoning. I chose to forgive Derek for me. I needed to forgive him in order to properly learn and grow from our experience together, but that doesn’t mean I don’t recognize there were things he could have done differently.

If you were treated badly, cheated on, talked down to, or lied to, I understand the pain, but I also invite you to open up to the idea that we are in charge of our lives and what we get from our experiences.

We each have the opportunity to look under the surface of our pain and see the end of one thing as an opportunity for another. We can take our heartbreak and turn it into heart growth. It’s begging for us to do so, in fact.

If we can infuse gratitude into our pain, we will experience miraculous shifts in our lives. My hope for you is this: that you can move through your pain, heal your heart, and one day, when you run into that person you once dreaded seeing, you can look at them, recognize yourself, and say “thank you.”

Laura Smilski is a Holistic Love Coach and the owner of Luminous Living. She is passionate about helping single, professional women create clear, simple goals that will guide them towards loving themselves and being excited about dating and relationships. Sign up to receive her free blog updates and special Access Love Video and follow her on Facebook and Instagram.

What to Do When Someone You Love Is Sick and Struggling