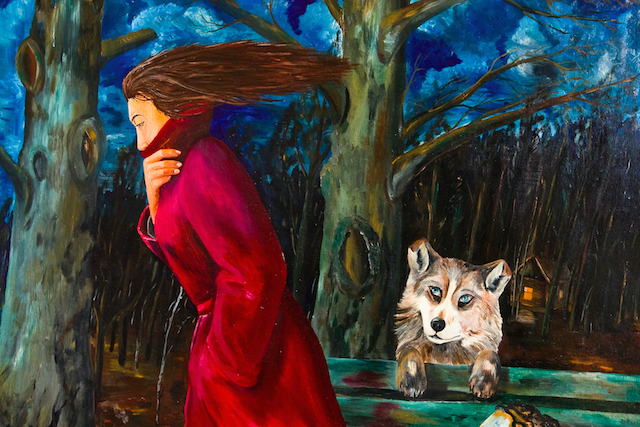 “It’s not a matter of ‘letting go.’ You would if you could. Instead of ‘let it go’ we should probably say ‘let it be.’” ~Jon Kabat-Zinn

I’m not good at heartbreak. I wrestle the circumstances, hate it, and can’t let go of the hope that the relationship could be transformed.

Aren’t there people who do heartbreak well? Aren’t there folks who sit in heartbreak for just a little while, then shortly fold up their hands and accept the situation? Sometimes it seems there are those who even flip a switch—”It didn’t work, we tried our best”—and that’s that, and they go about their merry lives.

I want that. How do I get that?

I was one of those children who were told they’re “too sensitive,” that I felt too much, too deep. Nowadays I understand that “You’re too sensitive” generally means “Please bottle your feelings. I don’t know what to do with them and they’re making me uncomfortable.”

Yet I still feel it would be better to be less affected. After all, isn’t this Samsara (the name Buddhist’s gave to the cycle of suffering)—this longing, doing, clinging, and grasping that I do in a heartbreak state?

My ex-girlfriend and I parted ways lovingly—she needed more signs of commitment, I needed more closeness, and we worked those issues until exhausted—but the part of me that sometimes throws fits against what-is is throwing a fit. And the phrase “let go” strikes me as unhelpful, even impossible at times. I feel the loss, and I feel the hope that things could be different.

How do I learn to be less affected? Isn’t “letting go” central to why I’m meditating, so that I can be someone, for god’s sake, who can let a thing go? To make peace and move on already?

On a recent hot day sitting by the Willamette River in Portland with my friend Claire I asked them, “What do I do about my hurting heart and all my grasping?!”

The river lapped by us. It’s the longest river in the U.S., which flows primarily north, or “uphill,” which is rare. The river comes up from Eugene and merges 183 miles upriver with the Columbia River on the border with Washington state.

My predicament feels similar to the river: Why would it (I) flow uphill? Doesn’t it contradict the idiom that water follows the path of least resistance? Wouldn’t I choose an easier path, and not feel so much? Can I go downhill like it seems people who seem to let go more easily do?

I said to Claire, “I hate this idea of letting go right now. What the hell does it mean anyway? I feel like some Buddhists are attached to the idea of letting go! There has to be a Buddhist understanding that things stick in our heart for a while and that’s okay.”

Claire looked at the river and said, “There is a word for that.”

Then we began to laugh. And laugh, and laugh. We looked at each other and Claire’s big brown eyes sparkled, and I laughed in a way I haven’t in too long, a way of laughing at my situation in good humor. It was laughing as surrender. Laughing as acceptance, and laughing because I saw myself for who I am—a mess. Suddenly I wasn’t taking that mess too seriously.

We marveled at how attached we get to our sadness, how it feels indicative of how much we care and love.

We laughed because we’re human, and this is what we’ve inherited: this tendency to fixate, but also simply the tendency toward heartbreak, the consequence of owning a soft heart and feeling longings for people and things that make us feel bright and alive, and then one day suddenly they’re gone and we miss them fiercely.

“A student asks the teacher, ‘How do I let go?’
The teacher says, ‘You can’t, you won’t. You don’t.’
So I actually want to sit here and encourage us to relax more.”

Relaxing feels more resonant to me than the concept of letting go, and it’s why Claire’s response was magic: it was an invitation to lighten up.

For me, the language of letting go hasn’t felt kind or sustainable. Maybe because it’s a strong action verb; I’ve (mis)understood letting go as an action I have to take, a should—as if I’m at the racing block and the gun’s about to fire and READY SET GO I better be ready to LET IT ALL GO! when that shot sounds, or else.

Letting go can feel like a linguistic misunderstanding to me, an encouragement to transcend being human. But we don’t practice to attain exalted states; we practice to allow our life to unfold truly.

“When my mother died, I received one of the hardest and most precious teachings of my entire life. I realized that I only had this one chance to grieve her death. I felt like I had a choice. On the one hand, I could be a so-called ‘good Buddhist,’ accept impermanence, and let go of my mother with great dignity. The other alternative was to scour my heart out with honest sorrow… My sadness became part of the river of grief that pulses deep inside us, hidden from view but informing our lives at every turn.”

Because I’ve been trying to force myself to let go I’ve been pushing away my experiences lately, and hating myself for longing and missing. This is violent. Being real about what impacts me, and how, is a radical and loving acceptance of my own life experience. My hunch is that allowing myself to be as I am will translate to allowing others to be as they are.

Shortly before we broke up, my girlfriend gave me a palm-size Buddha sculpture. It is carved in stone, feels cool to the touch, and looks like an old bald woman who is the embodiment of what, in Zen, we call Joyful Mind (one of the three minds, or Sanshin, of practice).

Joyful Mind is all about finding delight in our difficulty and in the rich experience we have in Samsara. It is about being present in our struggle while also being attuned to an undisturbable place inside us.

This little Buddha encourages me to lighten up in the same way that Claire encouraged me to lighten up. I like this joyful Buddha’s way of laughing, the way her shoulders are so soft as to not even be trying, yet her posture is still upright. The skin around her eyes is worn from laughing.

Joyful Mind is about being present to the suffering, not about letting it go. Ironically, sometimes suffering eases up on its own when held this way.

Part of what feels impossible about letting go is that it feels easy to confuse it with spiritual bypassing—the tendency to use spiritual ideas and practices to avoid feeling emotions or to sidestep psychological wounds.

Is allowing Samsara freedom from Samsara? When Claire reminded me that spiritual practice isn’t about achieving some transcendent, tidy state, I felt ease. I accepted my inner mess and remembered that our practice isn’t about being less affected, it’s about allowing everything to show up and being honest about how we’re impacted. Allowing everything to show up means that all my fears and vulnerabilities appear, and that’s more complicated than letting go.

A fellow practitioner once told me that the reason we have two hands is because one holds suffering and the other holds the cosmic joke: we are equipped to hold the mess of life lightly. I want to be real about how I am impacted by life, and I feel newly reassured that my two hands are meant to hold it all.

In the way that in AA they use the phrase “one day at a time,” I’m going to allow my own slow progress and forget about letting go for the moment. The truth is that I’ve lost something precious, and the longing for it fills me. It’s the longing for closeness, to know and be known, the longing for understanding and shared reality, for fun and safety.

The loss of relationship is its own death and now in my belly it feels lonely. The depth of that feeling is indicative of how much I wanted to tend what I had.

This is who I am, someone who feels a thing fully, and in so many ways over the years the overculture has taught me and so many others that it’s incorrect to be sensitive, and here I’ve internalized that oppressor: I’ve tried to beat my sensitivity out of myself and force myself to let go and stop feeling what I’m feeling, to get over it already, in the name of Buddhism.

This misinterpretation has got to stop. I want to lighten up, to allow every ache, every resistance, every longing that unfolds. To allow it all, to stop resisting my experience, to watch it, to know I don’t have to act on it, and to keep good company with a sweet friend who reminds me not to take any of it too seriously.

Cassandra Moore is a writer who lives in Portland, OR and works as a Mindfulness Teacher for the first for-credit Mindful Studies program in the country. She is native to the desert southwest and is writing her first book.

Healing from Heartbreak: How to Lessen the Pain