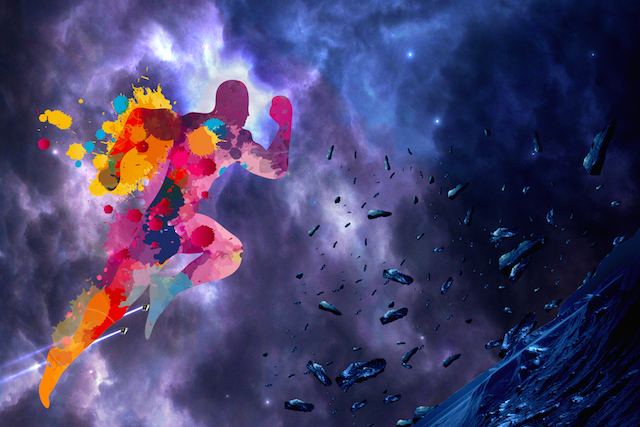 “If you spend too much time thinking about a thing, you’ll never get it done. Make at least one definite move daily toward your goal.” ~Bruce Lee

It’s easy to criticize others.

It’s easier to sit outside a situation than be in it.

Ironically, it’s easy to belittle someone else’s efforts without making any real effort ourselves.

The safe side of the ropes is an easier choice than committing to being in the ring, truly baring something. It’s also a softer option.

It’s much harder to have skin in the game.

I know all about living on the safe side of the ropes, as for too many years I was a ‘writer’ who never wrote.

Some people are blessed to know what they want to do with their lives from an early age. They follow that path, committed to making it work wholeheartedly. No backup plan required.

I’ve never been that person. I’ve tried; I’ve tripped and fallen into all sorts of ways of earning a living. And I eventually landed in a space that fits my lifestyle for the most part, with the amount of freedom I have, and also pays me well for my time as a consultant and company of one (me).

The downside is that this career path doesn’t always fulfill me. There is a creative gap at times.  I have ideas that don’t always belong in my client work but burn away at me anyway.

Writing has always been something I’ve been drawn to. I’ve read books throughout my life and have always appreciated the beauty in a perfectly framed run of words.

Much earlier in my life I had a few unspectacular efforts to write some articles. Some work ended in print, but most didn’t make the cut. Even back then, perhaps fueled with a young man’s inflated ego, I fancied myself as something of a writer but lacked the work ethic or skills to back up my ideals.

I wasn’t willing to commit myself to the craft, not even close. I wasn’t willing to have ten ideas rejected by editors so the eleventh would possibly be accepted. So, other than crafting business cases or technical process documents for consulting clients, I didn’t write (creatively).

I occasionally promised myself I’d write, I even postured that I could do better than those who did, but I continued to remain passively on the sidelines.

Until one day, the inertia all became too much. Yes, the safe side of the ropes was easier to some degree, but it was also uncomfortable. An itch was being left unscratched. I decided it was time I put my skin in the game.

So I started a simple blog. Two blogs, in fact. One based on some of the ideas that had been burning away at me and one based around haiku. (I also fancied myself as a poet who, you guessed it, rarely wrote any actual poetry!)

Did the world stand up and take notice? Of course not. In fact, I look back now and think my initial efforts were pretty awful and unstructured (some would argue my writing remains that way). However, something magical did start to happen in me.

The creative itch and ideas that had gnawed at me started to see light. I started to commit more time to writing. I started to make it a priority in my days and weeks. I strived to get better.

This process all started eight or so years ago. The blogs have changed (one being retired), but my writing has continued. Books have followed. Writing has become an important part of my life. An important way for me to express myself and share something in me that may have remained covered up otherwise.

Is it how I pay all my bills now? No, and I’m really not sure that’s the point. Committing myself to the process of making my work the best it can be, of trying to make today’s work better than yesterday’s, is reward in of itself. I have invested myself in the process.

Do I still dream of a day where I’m a full-time writer and the words I labor over support my lifestyle fully and pay for my travels? You bet I do. However, I’m also going to keep turning up to write regardless.  I’ll carry on turning up to write until I feel I have nothing left to say, and then I’ll stop. And, to be clear, I hope I never stop while breath remains in me.

I’ve realized that the very act of putting skin in the game is reward enough. I’m in the (writing) ring, baring a little and sometimes a lot of myself. It’s hard work at times, but it’s also exhilarating.

The Nobility of Applying Ourselves

To test ourselves is to learn to trust in ourselves. Whether we try and succeed immediately, or more realistically, try and fall down, pick ourselves up again, and then succeed, each time we apply ourselves we bolster the habit of getting out of the blocks. We learn to embrace, and revel in, taking action. We liberate ourselves.

Our Choices Shape Us

The choice is ours to make.

We can live a passive life, never truly putting ourselves out there, and possibly shooting down the efforts of others. We can live a life of itches never fully scratched. We can leave dreams left un-chased.

Or we can commit ourselves to an all together different route.

We can commit to try harder, to do better, to be better. We can bare something of ourselves to the world. We can put our skin firmly in the game. We can seek to make an impact in our own small but significant way.

Carl writes short books full of big ideas. He is also the proud owner of Frictionless Living which is focused on helping readers find and live their own version of a simpler, good, life.