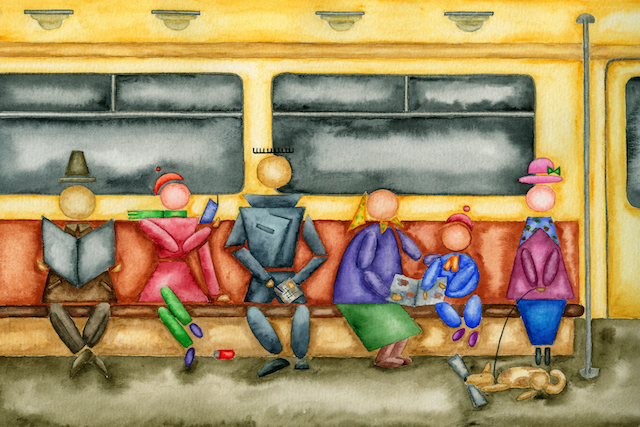 From uttering unkind words to sleeping with unkind men, I’ve had many moments of shame in my life. Still, there is one particular moment of shame that stands out from the crowd. It happened at least ten years ago, but I remember it as if it were yesterday.

I was strolling around downtown Toronto with a visiting friend when a rough-looking fella suddenly approached me. What he was planning to do or say to me, I’ll never know, because my knee-jerk reaction was to take the widest of wide births in order to avoid a face-to-face interaction.

My girlfriend laughed at how quickly I’d dodged him. While she managed to keep her observation light and non-judgmental, I knew she wasn’t just talking about my ability to spin on a dime. Rather, she was commenting on how this human being had so obviously scared the living crap out of me.

It’s not as if we were walking down a deserted alleyway. It wasn’t dark outside. The guy wasn’t wielding a knife or coming at me with raised fists. For all I know, he wanted a quarter, or a cigarette, or directions.

Maybe he wanted to hurl some verbal abuse at a stranger because he was having a bad day. Possibly, or quite likely, he was a resident of the mental health facility across the street. Is that a crime? The fact is, I didn’t know. So I chose to pretend that this human being wasn’t even being.

How often do you walk down the street and avoid the gaze of a stranger because it feels uncomfortable?

Here’s what I’ve realized in the years since that incident.

My discomfort is nothing compared to the discomfort of the panhandler who’s parked day after day in his wheelchair outside my local grocery store because finding work is tricky when you have no legs.

It’s nothing compared to the discomfort of the physically disfigured man who can’t hold somebody’s gaze for longer than a couple of seconds and knows exactly why.

And it’s nothing compared to the discomfort of the lonely old woman who wants but fails to find someone to chat with on the bus because when she gets home, there’ll be nobody to talk to. For hours. Maybe days.

My big moment of shame has been top of mind since returning from vacation.

My husband and I have just come back from Newfoundland, where we spent one of seven nights bunked up in a teeny blue cabin looking onto a fisherman’s wharf. The cabin was sweet. The view before us was stellar. The community was one I would never choose to live in.

Behind and adjacent to our cabin were twenty or so simple homes. None had the charm of our picture-perfect Airbnb. As I sat outside sipping wine, enjoying the view before me, and contemplating life, an older, heavy-set, weathered-looking woman stopped at the end of our driveway and started chatting.

I could barely understand her, partly due to the noisy ocean waves and partly due to her thick Newfie accent, so I rose from my Muskoka chair and greeted her halfway down the drive.

Her name was Patricia, she told me. She loves it when new guests check into the blue cabin. “Yesterday, there was a couple from France. I meet all kinds of people. I love meeting people.”

She asked me where I was from. I answered, “Toronto.” Detecting my accent, she responded, “that’s where you’ve come from but is that where you were born?” I explained that I was born in Toronto but grew up in London, England, and moved back to Canada as an adult.

She held her hand to her chest. “Seriously, you and your husband are from England?” I nodded yes. She beamed a big grin. “For the love of God!” I’d blown her mind.

Patricia insisted that I step inside her humble house. She wanted to show me something she was positive I’d never seen ever before.

After walking through her gloomy vestibule and being greeted by Charlie the dog, I saw no fewer than 500 coffee mugs. About 450 were hanging on her kitchen wall. Fifty or so had been relegated to a table in her living room because real estate was lacking.

I laughed with delight. Patricia laughed with me. “Crazy, right?” she said. Crazy hadn’t even entered my head. Charming had. I was instantly smitten by Patricia and the cups that adorned her bright orange, wood-panelled walls.

I had Patricia pegged for eighty or so. She told me she was sixty-six and that she’d lived in that house since birth. She was raised by her dad after her mother died when she was five months old. Her dad died twenty-five years ago. She’s lived alone ever since.

The nearest shop is fifty kilometres away. Patricia pays someone to pick up groceries for her. It’s a pain, she admitted. And lonely. That’s why she loves it when the tourists come to stay.

I asked if she had ever considered leaving her small community. “God, no!” she said. “I love it here. In two weeks, the whales will come into the bay. When you walk to the end of that pier, you can feel the spray from their blow holes, they come in that close.”

Did I mention Patricia has no teeth?

I didn’t? Well, now you know. Patricia has no teeth.

After our most memorable encounter, I imagined a similar but different scenario.

I’m on the streetcar in Toronto, heading downtown. A heavy-set women gets on carrying a large plastic bag. Her skin looks old and leathery.

She’s wearing an orange Dollar Store T-shirt. If she’s wearing a bra, it’s not a good one; her breasts hang low and heavy. She plops herself down in the seat next to me.

I can smell the cigarette she just stubbed out. She smiles a big toothless grin and asks if she can show me what’s in the bag. What do I do?

Do I say yes and then make eye contact with other passengers to ensure someone sees me engaging with this ‘crazy’ woman. You know, just in case she decides to grab my purse and run?

Do I pretend I didn’t hear her and just keep checking my Instagram?

Do I ring the streetcar bell, get off at the next stop and jump on the one that’s following close behind?

Or, do I respond to her exactly as I responded to Patricia? By that I mean do I give her my full attention, embrace her with curiosity, and treat her like a human being?

Because here’s the thing. Whether she’s living in the cabin next door to my hut by the beach or sitting beside me on a streetcar, she’s exactly the same woman reaching out for exactly the same thing: just a little human warmth.

Be kind to strangers.

Viv is a freelance writer, blogger, and life coach who strives to understand her own motives, actions, and responses with a view to living her most authentic life. In 2017, she launched vivfortoday.com where she blogs her heart out. Through her blog and her coaching business, she helps inspire others to live with peace, joy, and positivity. For more from Viv, subscribe to her newsletter or follow her on Instagram.

Taking Risks: 5 Things to Know Before Leaping without a Net