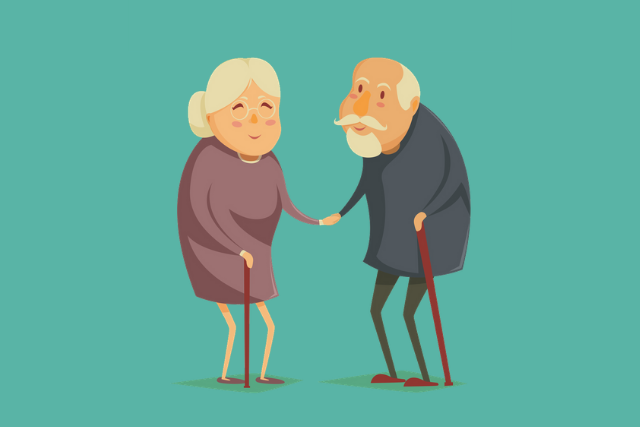 “It’s not the events of our lives that shape us, but our beliefs as to what those events mean.” ~Tony Robbins

Is there anyone in your past that inspired you to become the person you are today? For me, that was my grandfather, Charlie.

Charlie grew up a poor farm boy in a small South Carolina town and ended up an executive in a Fortune 250 company. He was a poster child for the American dream, and I respected him for it.

But what I admired most was his character. Charlie was always content with life, regardless of his circumstances. He prioritized servant leadership and measured his self-worth based on how well he served others.

People were drawn to him because of these characteristics.

I only had twenty-five years with my grandfather, yet he had a tremendous impact on my life. Although I learned much from him during that time, the most significant lessons came near the end of his life as he was dying.

For most of his life, Charlie was active and fit. He played football in college, golfed throughout adulthood, and was a master gardener (he had a spectacular rose and tomato garden).

But all of that quickly came to an end after he was diagnosed with ALS (also known as Lou Gehrig’s disease).

ALS is an incurable and fatal disease of the nervous system marked by progressive muscle weakness within most of the body’s muscles. Its symptoms cause difficulty with walking, picking things up, and even breathing.

Over a short time period, Charlie went from regularly golfing and gardening to being unable to do much (other than watch his body slowly waste away). He couldn’t drive, needed full-time oxygen, and had trouble walking on his own.

Given his condition, you’d think he would have exhibited (at least some) anger, frustration, or depression. Yet he didn’t. Instead, he was the happy, content man I’d grown up with.

Initially, I assumed that he was hiding how he really felt so that he could remain the strong patriarch of our family. But over time, I realized that he wasn’t faking it. He was happy despite all that he was going through.

As a young, stressed-out law student who couldn’t fathom handling his situation half as well has he was, I wanted to know how this could be. So, I got up the courage to ask him.

Charlie told me that happiness has nothing to do with your circumstances or how you feel physically. Happiness is about who you are.

Unfortunately, I had no clue what he meant. But Charlie had a way of ending conversations when he felt that he’d said enough, and this was clearly one of those moments. So, I shut up and hoped that I’d one day get it.

That day came only a few weeks later when I helped Charlie drive my grandmother’s car to a local service station he frequented. The day was cold, grey, and misty—and Charlie was having an especially tough time breathing and walking.

When we got there, the mechanic made a point to come talk to my grandfather (which should have been a clue of what was to come, but I was oblivious). After chatting for a few minutes, he went outside to get to work.

To my dismay, Charlie wanted to follow him. As I assisted my grandfather up and outside, I wondered if following was the best idea and worried about how he’d be affected physically while standing in the cold, wet weather.

For the next forty-five minutes, Charlie stood outside and talked to the mechanic while he worked. I often had to repeat what my grandfather said, because his voice was going, but that didn’t seem to matter. Both men laughed and enjoyed each other’s company.

On our way home, Charlie nodded off and his breathing sounded terrible. Later that day I asked him why he’d used so much of his energy to talk to a man he barely knew and had nothing in common with.

He looked me in the eyes and told me that what he was about to say was important and I’d better listen.

Charlie told me to never discount or disrespect people so easily. He emphasized that most people are wise and have lessons to teach. The key is to be open and willing to listen.

That’s when I finally got it.

Charlie was happy and content because of how he viewed himself, his place in the world, and even the people in it. For him, life was about being of service to and in relationship with other people.

My grandfather believed that everyone has unique gifts to share with the world, and that his role in life was two-fold:

Charlie believed that serving people is part of being in relationship with them. And he understood that service comes in many forms, including through simple everyday moments such as taking the time and effort to talk to your mechanic while they work on your car.

One of the things I learned from Charlie that day is to stay curious about people, especially about those who seem different. He was fascinated by these differences and wanted to know what motivated them and what they dreamed about. He aimed to see their soul.

This viewpoint enabled him to look at people as human beings who are vulnerable, dream big, and feel. That’s what enabled him to be so open to and accepting of others no matter who they were, what they did for a living, or how different their beliefs were.

Charlie also understood that relating to and connecting with others is a two-way street. To connect with people means allowing them to help you. You must be willing to be vulnerable.

The interesting thing about vulnerability, accepting help, and allowing yourself to learn from others is that it’s actually an act of service. By opening yourself up this way you’re allowing someone else to fully realize and use their gifts.

That’s why Charlie so gracefully accepted the vulnerability his illness brought upon him. And it’s why he was content and even happy those last difficult years.

Once I understood the answer behind why Charlie was always so content with life, regardless of his circumstances, it raised an important question. How could I be that way?

I wish I could tell you that I immediately figured that out. Truth is, I’ve worked for years to get to a place where I can finally say that I’m closer to where I wanted to be. And I’m still a work in progress.

I’ve tried just about every mindset practice there is out there, from self-affirmations to focusing on the positive. Many have been dumped and all have been revised over time.

Here’s what has worked for me (that I still do consistently):

1. When dealing with negative and stressful situations, I remind myself that every experience is an opportunity for growth and development.

I identify what can be learned and focus on that. This isn’t the same thing as always being positive. It’s about not getting stuck in negativity.

2. I observe people closely when in public and try to identify the emotions and feelings that they’re exhibiting.

And then I take it further by imagining what their dreams might be and what they fear. Basically, I get curious. This practice has made me a more intuitive people-reader (which has helped me both personally and professionally). And it’s also made me more accepting and less judgmental of people and their differences.

3. I try to add value to someone’s life daily by being kind or of service to someone.

It might mean complementing a co-worker on a new outfit, reaching out to an old friend I haven’t talked to in a while to tell them I care, or going out of my way to be kind to a waitress who’s been rude (and obviously not having a good day). Doing this has made me more aware of my surroundings and the people in it and helped me to better connect with people more quickly. It’s also made me more compassionate and kind.

4. I’m grateful for something small every day.

I’ve found that gratitude helps me to see the good in the world (and in people) and to have a more positive attitude, especially if I focus on the so-called little things. And when times get tough, I force myself to be grateful for what others are doing to help me. I started that practice when I battled breast cancer. It helped me accept my vulnerability with more grace.

My grandfather was a wise man. I wish that he were here with me now but am hopeful that sharing what I learned from him will continue his legacy. A legacy worthy of being passed to (and by) others.

Heather Moulder is an attorney and executive coach who helps successful, yet unfulfilled, professionals create success from the inside-out for a fulfilling career that’s balanced with a real life. Connect with Heather for weekly tips and resources on how to retrain your mind for resilience, overcome overwhelm and self-doubt, and confidently create a more fulfilling, balanced lifestyle that’s fun.

The Surprising Secret to Being on Time