Why We Should Accept Our Foes and Adversaries
By Daniel A. Miller 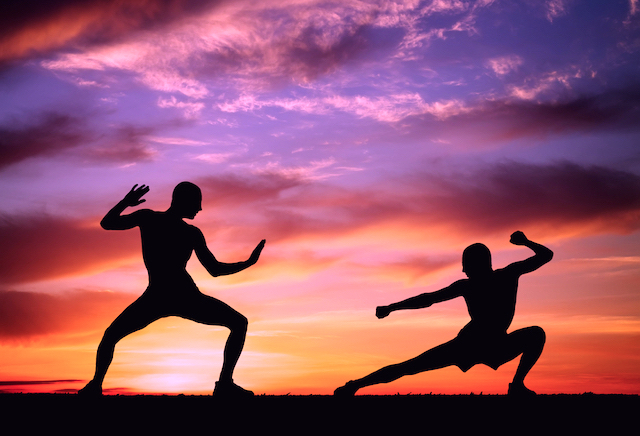 “Happiness can exist only in acceptance.” ~George Orwell

Reading the above title, you may be thinking, “Why should I accept people who are trying to harm or cause me trouble? They are the last people I would want to accept!” I know I used to feel that way.

It’s clearly unnerving to think about accepting those that we feel are toxic, and even more challenging to do so.

However, when I look back, I now realize that I suffered unnecessarily from my refusal to accept such people, both in terms of greater personal anguish and poorer results.

This became even clearer to me—of all things—while competing in some seniors’ tennis tournaments.

Not long ago, I played a first round match in a tournament against a player who constantly miscalled lines and game scores—both, of course, in his favor. I felt I was a better player than him, but I let his court antics upset me so much, I lost my focus—and the match.

After entering another tournament several months later, I received a call from this person asking me if I would assist him in entering the same tournament. He didn’t understand English well and had trouble completing the online entry form. Oh brother, I thought to myself, do I really want to help him?

Yet, I felt that good sportsmanship required me to do so. When the draws for the tournament came out several weeks later, lo and behold, we were matched again in the first round.

At the time, I was in the midst of studying and writing about the rewards of acceptance, and I instinctively felt there was a reason this was happening: It gave me the opportunity to accept my opponent for the player that he was—crafty and likely not honest—and not let that impact my play. Here’s what followed in our second match.

After I was ahead in the first set, he started with his shenanigans again, frequently misstating scores and sometimes making bad line calls. I tried to remain calm, but internally I was very upset by his antics—so much so that I lost my lead and the match!

I left the court so embittered that I vowed never to play him again, even if that meant defaulting a match. I was very discouraged that despite my efforts, I was still unable to accept this person for who he was.

Unbelievably, two months later I drew him again in the first round of the largest seniors tournament in the United States. Out of sixty players in our division! How could that happen?

Because I didn’t want to put myself through such torment again, I seriously considered withdrawing from the tournament.

I still sensed, however, that there had to be some higher meaning or purpose to all this, and decided to play the match. However, before playing, I knew I had to seriously examine what was required in order to somehow accept my opponent—antics and all—and not let him get the best of me yet again.

Keys to Accepting My Foe

Here are the keys I used to finally be able to accept my opponent.

I told myself that I would not speculate further about his motives or character.

I thus would not focus on his being a schemer or cheater. Instead, I considered that there might be reasons beyond my knowledge, or even his, for his poor court manners. That made it easier for me to accept that that’s simply the way he was—and that it had nothing to do with me, and I need not spend mental energy worrying about it.

In this case, I was grateful for having “the opportunity” to do things differently this time. This significantly defused my anxiety about playing him again, and when we entered the court, I harbored no ill feelings toward him.

I focused on what was within my power to do.

Namely, to make sure I watched the ball well and played my “own” game, despite whatever he may do during the match. I also requested the presence of a court referee to assist in keeping score and resolving any line disputes.

Here’s how the match went. I fell behind 5-2 in the first set even though he didn’t misbehave; yet, I remained calm and focused, confident in my belief that the final outcome is all about me, and not him.

I then won nine straight games and the match!

This despite my opponent’s intentionally slowing down play by taking longer than allowed cross-over periods and more time between points.

None of his diversions angered me, nor altered my focus from what I needed to do. Indeed, I played even better. I am convinced that had I not found a way to accept my foe, I would have lost again.

If you still aren’t keen about the idea of accepting your foes and adversaries (or feel that it would be near impossible to do), a clearer understanding of what acceptance means should help you. For example, acceptance does not mean:

That you approve or condone another’s behavior.

You are not approving by accepting. Rather, you are simply acknowledging the “reality” of the person or situation, or “what is,” and deciding what’s best for you based on that reality. Hence, you can accept someone even though you disapprove of what the person says or does. (This is not to say, however, that you should accept abuse, violence, or other aberrant behavior.)

That you must “give in” to others.

Acceptance does not require that you relinquish your needs or subordinate your best interests to those of others. Once again, it means being realistic about the person (or situation); if you feel mistreated or imposed upon, you can disengage or detach—or, of course, stand your ground.

That you cannot be resentful.

It’s normal and understandable—only “human” if you will—to be upset or resentful when someone acts badly. What is important, however, is that these feelings be timely addressed and processed, and not be allowed to linger. When not timely addressed, you will linger in negativity and not be able to “see” the meaningful choices and options available to you.

And very importantly, acceptance does not mean,

That you have no viable choices.

To the contrary, it is only by truly accepting the person as they are (or the situation as it is) that you will be able to recognize the choices and options that will serve you best, as I did in my final match. Why? Because with acceptance, the focus changes from others to you—and what you can do to better serve your own interests.

The next time you deal with an adversary, a perceived enemy—or for that matter, simply a very unpleasant person—I challenge you to try accepting them as they are. In doing so, note whether there were fewer aggravations. Was it easier to remain calm? Were you better able to focus on taking care of your own needs?

Let me know how it went!

How Gratitude Can Calm Your Nerves and Make You More Effective

Accepting People You Dislike as They Are: How It Benefits You and How to Do It