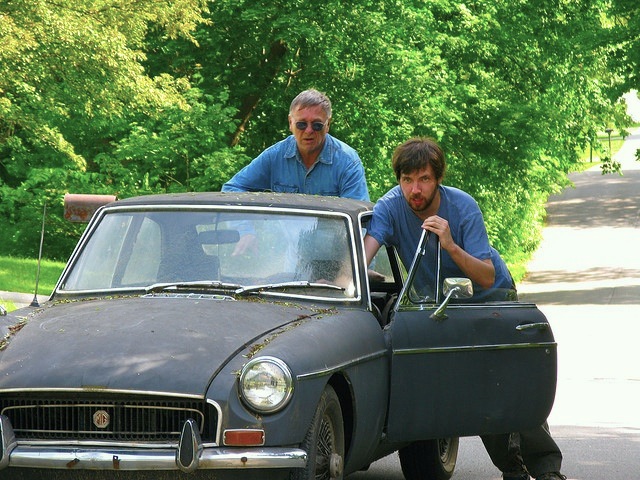 “It is one of the most beautiful compensations of life that no man can sincerely try to help another without helping himself.” ~Ralph Waldo Emerson

It’s a feeling of dread. Maybe you’ve experienced it before.

You’re driving down the highway and suddenly something goes wrong. You’re stepping on the gas pedal but nothing is happening.

All the little lights on the dashboard come on and you notice one particular gauge you’ve been meaning to address sooner.

The needle is just past the E. You’re out of gas.

It’s a helpless feeling. Desperation flashes through your mind as the wheels begin to slow. Other cars start passing you as you attempt to merge over to the emergency lane to get out of the way, the whole time hoping you can coast just a little farther, ever closer to the oasis of fuel at the next exit.

Maybe that isn’t how it felt for you or perhaps you’ve never been through this little peril. But that’s how it felt when I ran out of gas recently.

I was four or five miles from home, cruising down a long hill on the interstate when I realized my car wasn’t responding to my foot’s orders.

Fortunately, I was able to get over and coast all the way to the next exit and even up the ramp.  My mind raced, wondering how far I was going to have to push the car, and worse, if it would be uphill.

When my vehicle’s momentum finally slowed to a stop, I was relieved to see the gas station only a few hundred yards away and that I’d only have to overcome a slight incline to get there.

So, I got out and started pushing. As I grunted and heaved I was unpleasantly surprised at how heavy my little car was on a relatively flat stretch of road. But I pressed on, inching my way towards the plastic gas station sign that signaled my salvation.

My muscles strained against the heavy burden, legs and arms burning from the exertion. I thought about the times I’d seen other people who were out of gas. I always felt bad for them, maybe even a little embarrassed for them.

More than a few times, I’d actually stopped and helped them push their vehicles to the nearest station. While I lumbered forward, one particular instance popped into my head from several years before.

I was in Austin, Texas for a convention. A friend and I had been hopping around to different bars (like any good convention-goers) when, from the sidewalk, we saw a guy pushing a monstrosity of a car. It was a big convertible from the 1970s.

I don’t recall what make or model the behemoth was. All I know is that it was the heaviest object I’ve ever tried to move in my life.

Still, my friend and I started pushing with the guy. He hadn’t seen us at first and was surprised that his task had been suddenly lightened. He smiled back at my buddy and I as we kept pounding our feet across the pavement, one foot in front of the other.

“Just steer,” I told him as we kept easing the car towards a section of the road that began to slope downhill. “Once you get to where it starts slanting down you’ll be fine,” I said.

After several exhausting minutes, we reached the crest in the road and the car began to coast on its own. The driver thanked us and offered us money, which we declined. He waved back to us as he hopped in and guided the wheeled boat to the station.

We went on about the rest of our night and didn’t give the event much thought. In fact, I hadn’t thought about it in years.

Now here I was, in the same predicament, out of gas and trying to reach a little section of the road up ahead where it started to slope downward, the whole time trying to steer and push, a difficult pair to manage at once.

Suddenly, the car felt like it was half its weight. I first looked down to see if I’d reached some kind of a little down slope or something. Then I heard a guy’s voice from behind me.

“Thought you could use a little help.”

I turned around to see a total stranger, in his mid-thirties, pushing hard against the back end of my car. I smiled broadly. “Thanks man!” I shouted over the passing traffic.

He had parked his truck just off the exit, probably as soon as he had seen my plight. He hadn’t hesitated or thought about helping me for more than a second. His instant thought had been to help.

“You should be okay once we get to that little down slope up ahead,” he commented.

Inside, I laughed, remembering how I’d said those exact words to the guy in Austin a few years before.

A minute or so later, we reached the downhill section of road and my car began coast itself towards its haven. “I think you’re good,” he yelled and waved.

I thanked the man again and hopped in my car, steering it into the station on nothing but gravity’s sweet momentum.

I don’t know much about karma, but I do know this: life presents us with opportunities, little moments where we can make the world a better place with a simple action.

That stranger made my day better by lending a hand. He lightened my load and thus, lifted my spirits.

Had he not helped, I may have become annoyed at the situation and more easily bothered the rest of the day, even irritable. I could have returned home less happy and let those feelings pass from me to the people around me, making their day worse.

You have an extraordinary power to change someone’s day for better or worse, and you have no idea how far reaching that impact will be.

Another thing I took away from the gas incident is that good deeds never seem to go un-repaid.  It is an indelible truth that I’ve noticed time and again. Call it karma or mitzvah or comeuppance, it all works the same way.

I kept smiling as I filled up my tank. I felt grateful that a random stranger had helped me. It gave me a good feeling inside, a sense that everything would be okay, no matter what.

I started to replace the gas cap when I heard a familiar sound on the other side of the pump. A police officer in an old, beat-up pickup truck was trying in vain to get the engine to turn over.

“Battery dead?” I asked. “If you need a jump, I have some jumper cables in the trunk,” I offered.  The man’s frustration visibly eased a little.

“No problem,” I said as I reached in the trunk and grabbed the cables. “It’s always good to help someone out.”

Ernest Dempsey is a Counselor and fiction author from Chattanooga, Tennessee. You can check out his books or his powerful blog posts at ernestdempsey.net or follow him on Twitter @ErnDempsey.

The Simplest Way to Make More Time for What Matters

Crash Course: 3 Ways to Bounce Back When Things Go Wrong

7 Tips to Travel Well on the Road and In Life