I’m Not Broken, and Neither Are You
By Vironika Tugaleva 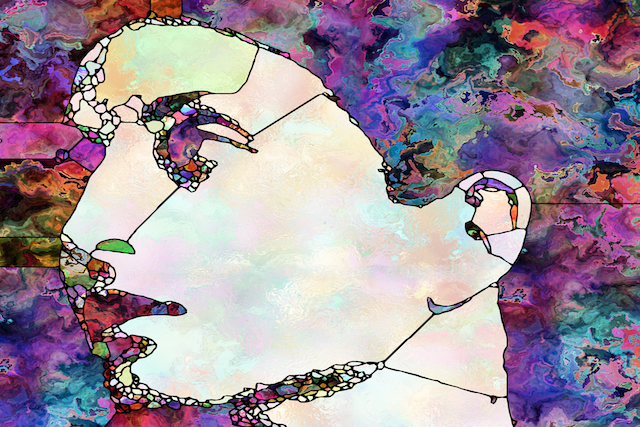 I used to have this secret habit of flipping through the DSM—The Diagnostic Statistical Manual for Mental Disorders—and diagnosing myself with every disorder in the book.

Reading over the criteria for borderline personality disorder, cigarette in hand and eyes wide open, I scanned the diagnosis criteria.

I thought that was an uncanny description of me, until I found antisocial personality disorder.

That seemed spot-on, but nothing, and I mean nothing, compared to when I first read about post-traumatic stress disorder.

After a few years, I added body dysmorphic disorder, substance use disorder, occasional episodes of manic disorder, and constant rotations between bulimia and EDNOS (eating disorder not otherwise classified).

Admittedly, some of those diagnoses should really have cancelled each other out, but I was more interested in collecting diagnoses like some would collect stamps than achieving medical accuracy.

All of my self-imposed labels gave me a strange kind of soothing feeling. They affirmed something I already believed, deeply, within me: I was broken. I was in a state of disorder. There was something wrong with me.

In my scourings, I avoided certain disorders like the plague. Anxiety, for example, and depression. Anxiety didn’t seem like a very “cool” thing to have and depression just didn’t seem plausible because I was so violently self-destructive, never stopping to rest for a moment unless I got infected with mono or West Nile meningitis (both of which actually happened).

To an onlooker, these things might have seemed like ploys for attention or misguided attempts at impersonating Hollywood. But, truly, these self-diagnoses stayed more private than many of my tortured war stories. They were something personal. They were just for me.

Looking back, I realize that the fuel behind my self-diagnosing was an obsessive, perpetual drive to find the answer to a question I couldn’t avoid for more than a few hours at a time: “What’s wrong with me?”

What was wrong with me, I liked to think, was childhood-trauma-induced permanent damage that, in mixing with my apparently high IQ, had created a sort of “Dr. House” complex within me, making me irreparably and irrevocably screwed up.

That was a nice story, but it didn’t satisfy the question. A question like “What’s wrong with me?” isn’t just some domestic house cat in the mind. It won’t sit quietly and patiently for most of the day, becoming vocal only if it isn’t fed for too long.

No, a question like that is a wild, ferocious, insatiable beast that rips into anything and everything in its path, killing simply for the sake of the kill, feeding constantly and ceaselessly on anything that smells like nourishment.

By the time I made it to age twenty-three, there were so many answers.

The way I blushed at the drop of a hat. The way I wouldn’t be able to stop laughing when other people did. The way I made jokes that weren’t funny to anyone but me. The way my upper lip twitched when I was nervous.

How I had absolutely zero ability to be sexy or act sexy without alcohol, feeling frozen and ugly if anyone ever saw me naked. How I had flashbacks, nightmares, and hallucinations I told close to no one about. How I drank alone.

How I just couldn’t seem to sustain happiness and, even when I tasted joy for a second, soon enough the drugs would wear off and I’d be right back where I started, wishing for a freedom I wasn’t sure was real.

All of my happiness, for about ten years, was induced by chemicals and co-dependence. I thought what was wrong with me was that I couldn’t feel happy without buying it or begging for it. I thought I was just that kind of person. I thought it would always be that way.

I’d love to tell you that I was afraid of being broken and damaged, afraid that past emotional trauma had rendered me dysfunctional, afraid that I was different from other people. Of course, that’s what I used to say and that’s a nice story, but I know now that it was all a big lie.

You know what I was really terrified of?

Deep inside of me, there was the awareness that, even if I fit every symptom in the book, I had no excuse to live half a life. Somewhere in there I knew I wasn’t really broken. I was terrified of what my responsibilities would be if I allowed myself to be, truly, whole.

When I was an addict, a victim, a diagnosis, I had no responsibility to anyone. If your neck is severed and bleeding, you can hardly be expected to open doors for people and make the world a better place.

Like this, I dodged the responsibility to discover my skills and talents, to serve people, to do something meaningful in the world—all by playing broken.

Of course, it wasn’t all a giant act. I had been abused. I had been raped. I had been an addict. I had horrible body image issues. I heard voices. I hated myself. Yes, those things were “wrong,” but so is a paper cut. And your body will do its best to heal the paper cut with no further intervention from you, if you let it.

Yes, I’d been broken, but I didn’t have to keep being broken. For fear of my own greatness, I put bandages on my wounds, letting them grow necrotic for lack of oxygen. I never wanted to get better; I just wanted to get pity, because I was too scared to ask for love. I kept myself sick for fear of my own health.

I’ll tell you right now that my fear wasn’t unjustified. Now that I’m not playing small anymore, I have more responsibilities than I ever have. I’m trusted with people’s most painful memories, with their deepest secrets, with the chance to support them when they’re on the brink of hurting themselves or others.

Yes, the responsibility is there, but it’s not the horror show I imagined it would be. I think the only reason I ran from it was because I was so weak from keeping myself broken that I couldn’t imagine how much energy I’d have to help people when I allowed myself to be whole.

I couldn’t have imagined how fulfilling it is to spread love, give love, be love instead of scrounging for tiny little pieces of approval and acceptance like a thief in the night.

From what I’ve seen of myself and of people, I believe, without condition, that no one is irreparably broken. In fact, no one is broken. Is having a paper cut broken? Of course not. From the moment you get a cut, you’re already healing.

And that’s what I believe. I believe we’re all already healing, no matter how great our pain or how serious the offenses against us. We’re built to heal, we’re already healing, and we can all experience this amazing life process—if only we’d get out of the way.