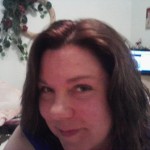 Lori Anderson is single and has two grown children and five grandchildren. She discovered metaphysics and New Thought five years ago and is writing a series of books about using specific thoughts to create our lives as we desire them to be.